The Nationalists develop their strategy for 1939. .

The obvious move would be to drive on Barcelona via the Zaragoza “bulge” but winter has set in the North and with it thick mud. The Republic have a well-crafted defence stacked to 12-14 Combat Factors each and most of the line is fortified with tank and infantry back up to prevent breakouts. The high defence factors and narrow fortified frontage would require the use of a vast quantity of scarce ASPs for little gain. Therefore an alternative use for the forces on this front has been devised.

The Asturias stronghold of Gijon and its adjacent hex with 19 and 15 points of DFs respectively, both fortified is such that it will need to be attacked at odds guaranteed to force a retreat. Because a 3-4 hex frontage can be made against this bastion this can be attached with second line 4 and 5 factor Divisions leaving the 6 factor units to attack the narrower frontages on the main front. (Typically 1 or 2 hexes wide) The weather here does not make too much difference because only 2 hexes are involved and -2 or -4 DRMs becomes effectively the same when retreats are all that is needed to force eliminations

So the Zaragoza bulge forces are to move North with all the non mech interventionist forces to eliminate this stronghold at the cheapest possible ASP cost.

However the Nationalists are not going to make the same mistake as in 1938 when they stripped the Albacete front bare. This allowed the Republic to mount a counter offensive which gained them 3 hexes of expansion and forced an unplanned diversion of forces from the main Zaragoza front. Instead they plan to maintain a strong defence including a number of front line divisions which can attack should the Republicans return the favour and strip  this “quiet” front and so present  opportunities.

As soon as the Asturias forces are eliminated the troops investing the city will return with all speed to re-initiate the attack on this front.  If all goes to schedule this will coincide with the spring sun and a final thrust for Barcelona and victory can begin.

The Nationalists second aim is to re-invigorate and re-enforce the Albacete front. This region has more open territory a wider frontage of attack and less favourable defensive terrain with no major rivers to cross. It offers breakout possibilities for the armour and the potential to isolate approximately half the Republican force from the ultimate objective, identified over a year ago which is Barcelona.  The taking of Barcelona  would force the collapse of Catalonia and taking all but one city hex ends the war. Indeed merely approaching the city in force could trigger a Catalonian collapse and victory.

The thrust at Albacete  will be in the direction of Valencia with pressure on the right flank against the Anarchists. Once split the southern crescent defined by Lorca, Murcia, Alicante can be contained with second and third line divisions predominantly without ASPs.  This force will continue pressing on targets of opportunity. If opportunity and force levels allow Alicante to be taken and the government relocated.  However he main thrust from a captured Valencia will be eastwards along the coast to Barcelona. If all goes to plan any such thrust will coincide with the return of the Victors of Asturias to press the Republic from two directions and initiate a swift end.

Supply: High outposts of both sides on the Penebetica range (circa 3913 SW of Albacete) become U2.
Replacements;  3 SRPs. Recovered .
Reinforcements: Arriving 3 XXs arrive equipped.
Factories: Bilbao back in production.

Naval Operations: 4X NT Transports  the 0-1-5 cons and ASP  from Palma to Bilbao  and remain. 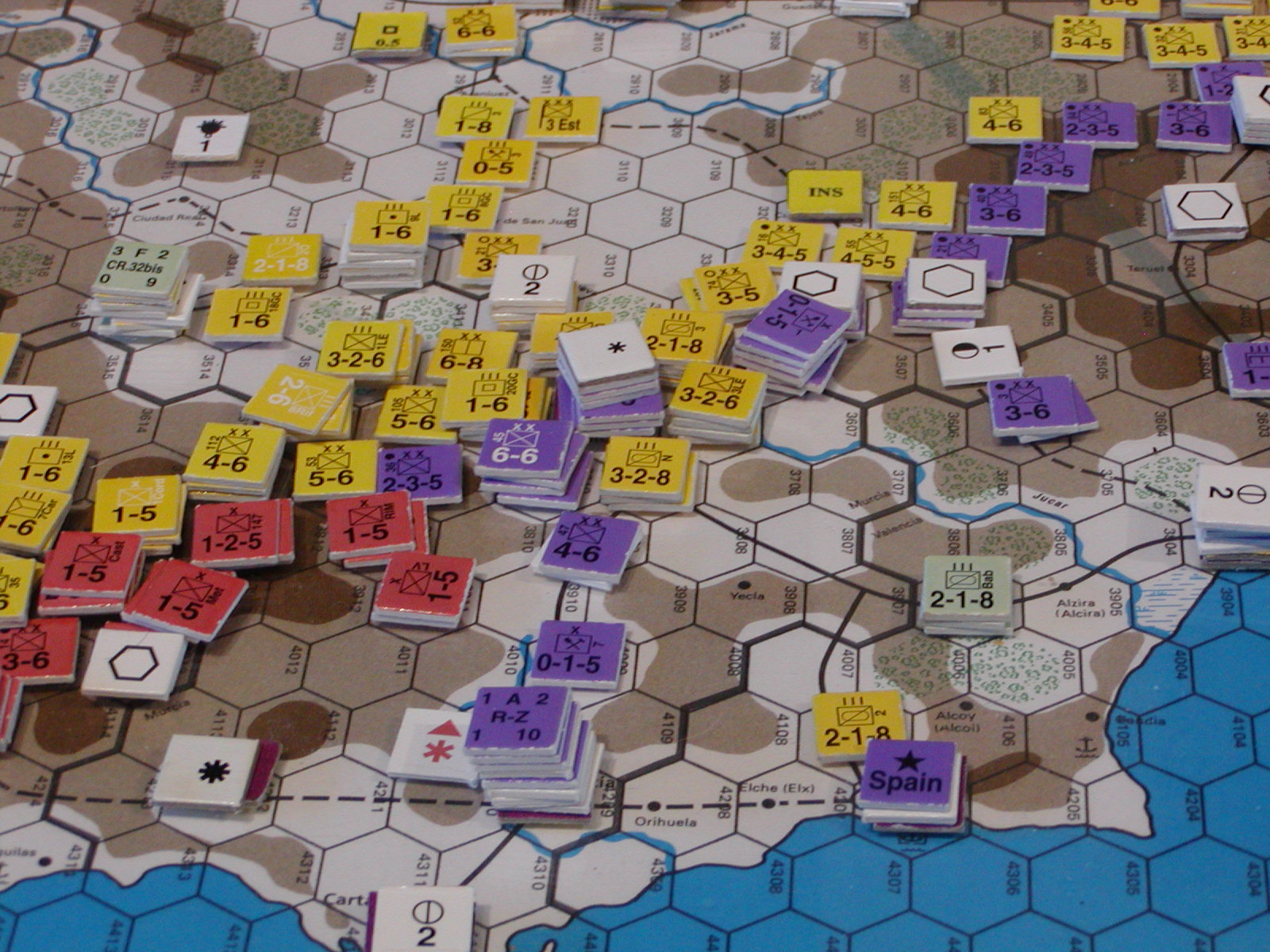 BREAKOUT! Panic in the Parliament