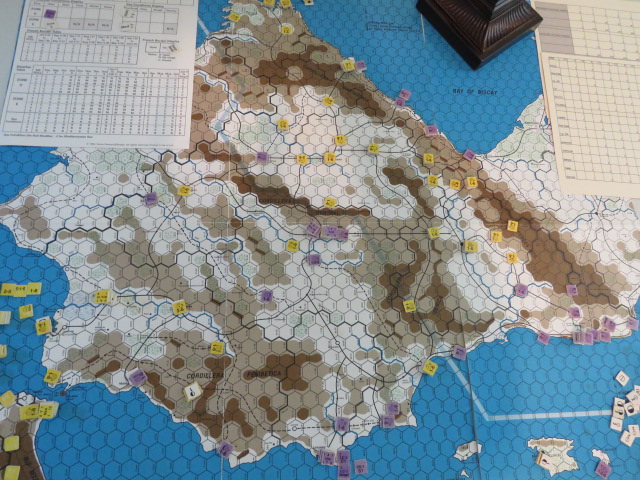 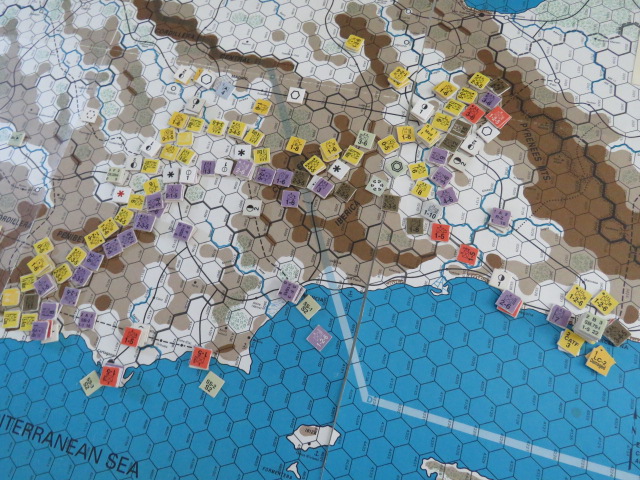 AUGUST I INSURGENTS – Madrid falls, albeit with a 4:1 – 2 EX result; but the Insurgents did capture 3 steps of badly needed attack supply. At least the Loyalists went down swinging. Another victory outside of Zaragoza and one east of Almeria made this a watershed turn. Can’t wait for the 13 divisions it took to reduce the city to turn south and see how far they can push before Mud.

AUGUST I LOYALISTS – Where to defend and when to retreat is the recipe for survival. Still no Revolt in Barcelona so they have that going for them.

A little digression here. I should just pack this in but a perverse sense of “what if” is driving me on. What if Franco succeeds in late 1937? Would a Spanish Civil War that lasted a little more than 1 year mean a quicker recovery than one that lasted nearly 3 years? Would his demands of Hitler (assuming Franco would even honor them if agreed to) for support and French territory in Africa been less severe? You know, more like going to the dentist to have some teeth filled, but not pulled. Personally I think Franco could read maps and see how naked he would be while Great Britain ruled the waves. All of that coastline to defend could have given Franco a readymade excuse even IF Adolf agreed to his armaments, petrol, food, etc. demands. 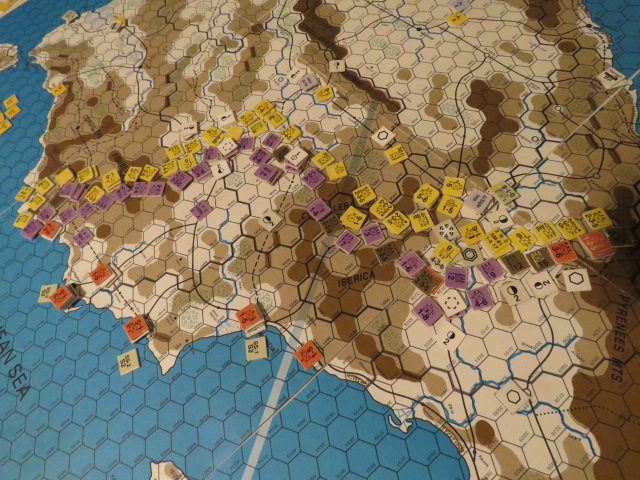 AUGUST II – INSURGENTS – An attack south of Madrid clears the Tajao River line and an Ex result with all Italian forces takes another hex southwest of Zara. Elsewhere ponderous corps are moved into position in western Castilla and in Aragon for the big pre-Mud push.

AUGUST II – LOYALISTS – No good options for counter attacks so beefing up the line is in order. The Loyalist dead pool right now sports 15 divisions of all affiliations and another 40 or so regiments or brigades. In contrast not only do the Insurgents have about 30 infantry replacement points but the only forces in their dead pool are the recently deceased Italians and a few artillery regiments. 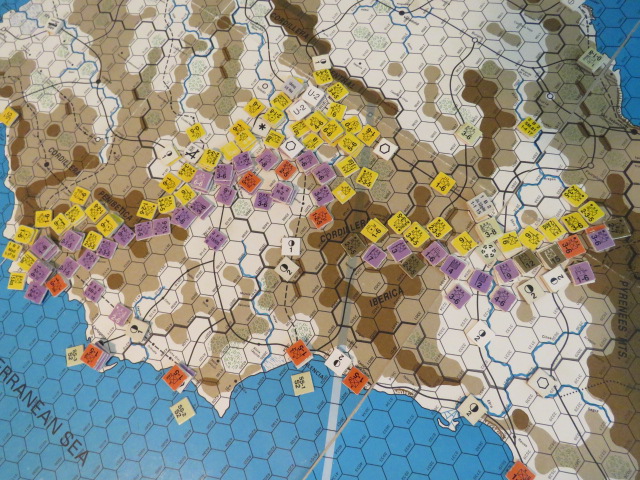 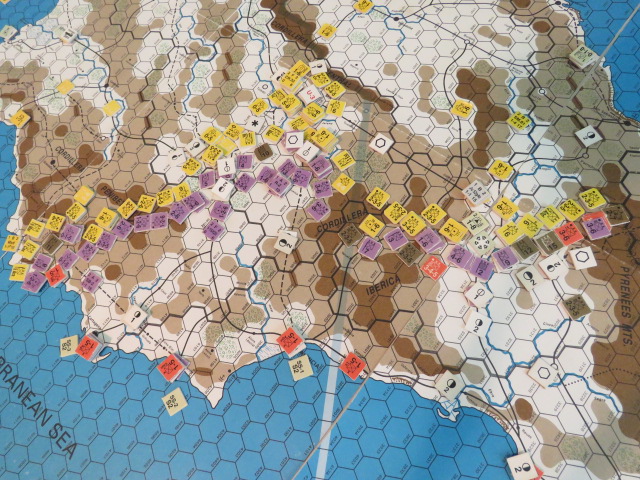 JUNE I INSURGENTS – The noose tightens around Madrid after 3 hexes are taken and another seized during exploitation. The first counterattack in ages occurs northeast of Zaragoza with the Italian legions leading the way.

JUNE I LOYALISTS – Strictly defensive measures as Insurgent stacks in Castilla and Aragon are too strong to muster decent (greater than 2:1) odds. Resource points rushed to the front and a pull back from around Almeria keeps another stack from being out of supply. 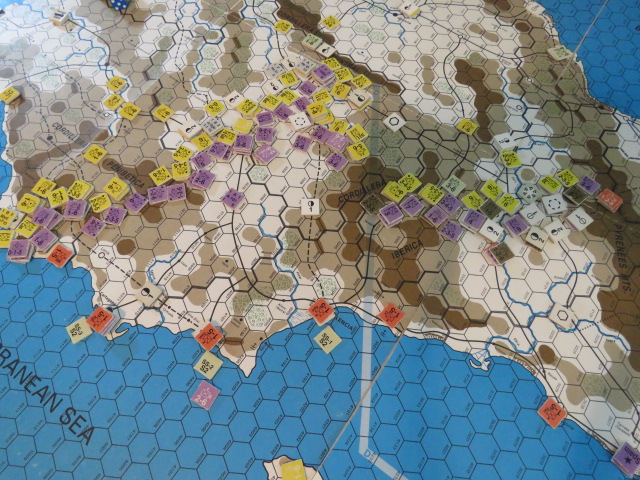 JUNE II INSURGENTS – Increasing pressure on the Loyalist lines southeast of Madrid and northeast of Zaragoza result in advances and losses. Alcazar de San Juan recaptured (HX). A slow but steady attrition of air assets, on both sides, continues. Insurgents have 3 eliminated and 2 aborted; Loyalists have 5 eliminated.

JUNE II LOYALISTS – An attempt to regain a lost hex south of Madrid fails (AS) but some progress (DR) in the valley north of Teruel. Continued feverish fort building. 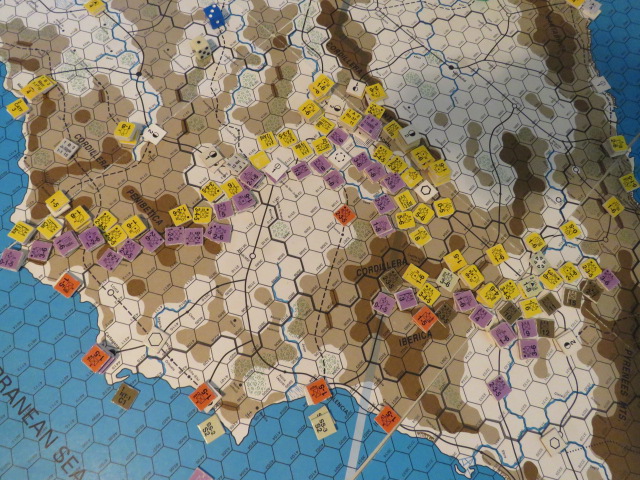 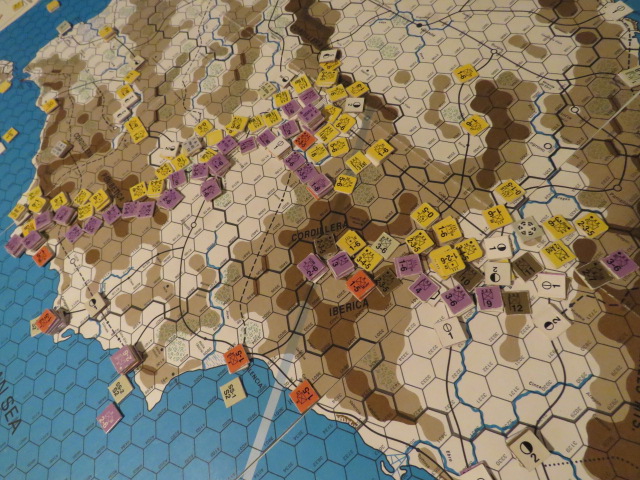 APRIL I – INSURGENTS – Mud/Clear – Seizure of the hex immediately west of San Sebastian spells doom for that Gobernito as the Basque territory is now split in two isolating a 6 brigades in a pocket and leaving only 1 2-3-4* and a handful of brigades around San Sebastian. In the south the line in Castilla is reinforced and despite the clear weather Franco decides to wait until after things are finally settled up north to make any further moves there.

APRIL I – LOYALISTS – In a surprise move a massive 3 corps attack captures Alcazar de San Juan, albeit at the loss of 2 divisions. Now 3 divisions and an armored brigade stack sit on the vital rail junction. An International division comes into being southeast of Madrid and a corps pushes north from Teurel. All Basque forces that can move retreat into San Sebastian forming a corps with a defensive strength of 13, including city garrison. 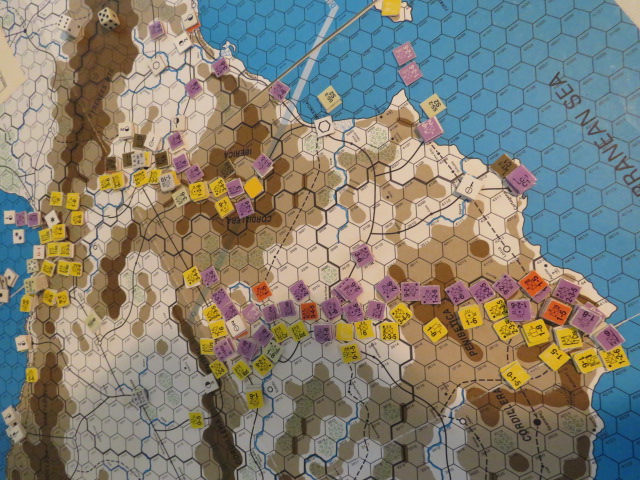 APRIL II – INSURGENTS – Clear/Clear – Goodish news and baddish news. San Sebastian falls but with a loss of 13 attack points in the Ex result; the attempt to take back Alcazar with a 3:1 – 1 attack results in an AR. Gaping hole in the line through which, no doubt, about a dozen Loyalist divisions nearby can exploit and/or assail the 10th Corps and widen the life line to Madrid.

APRIL II – LOYALISTS – Half the Basque forces in the pocket quit and go home. In Castilla influx of divisions and additional forces to capitalize on Insurgent AR result yields 3 more hexes of that province. Another International division built and more creeping up the valley north of Teurel. 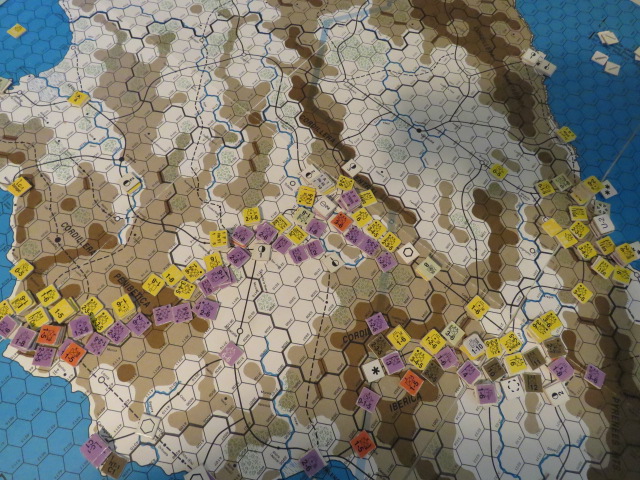 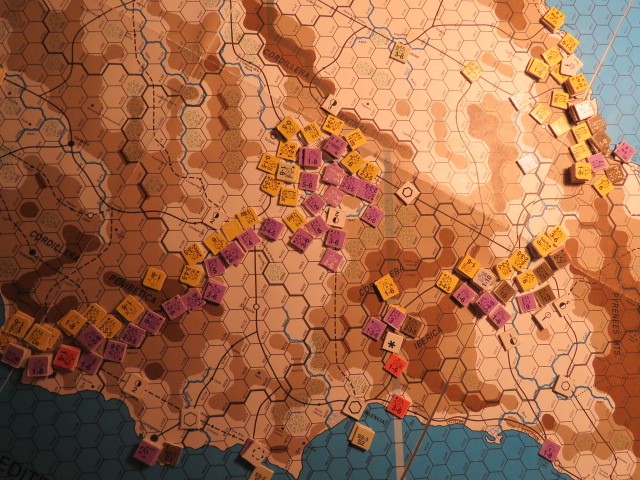 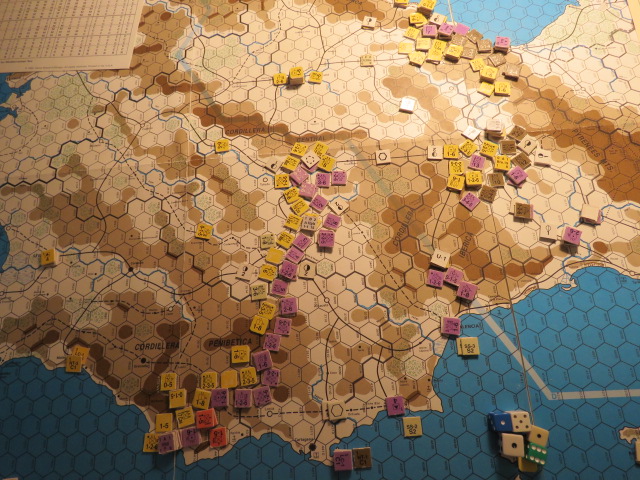 JANUARY I – LOYALISTS –Most of the units in the mountains north of Madrid perish. Four additional divisions constructed and raced towards Madrid in the hopes of pushing back the Fascists next turn. Basques continue to build self-supported divisions and hope to link San Sebastian with Bilbao. We’ll see. 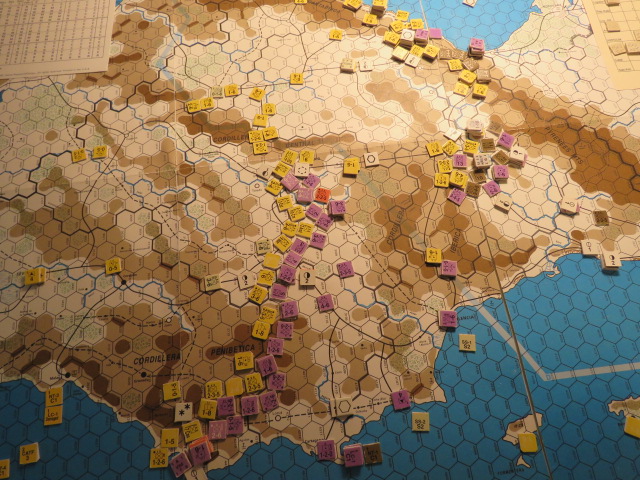