The library serves as a reference point for Europa, providing articles and books with historical background to the Europa games and the violent first half of the Twentieth Century. 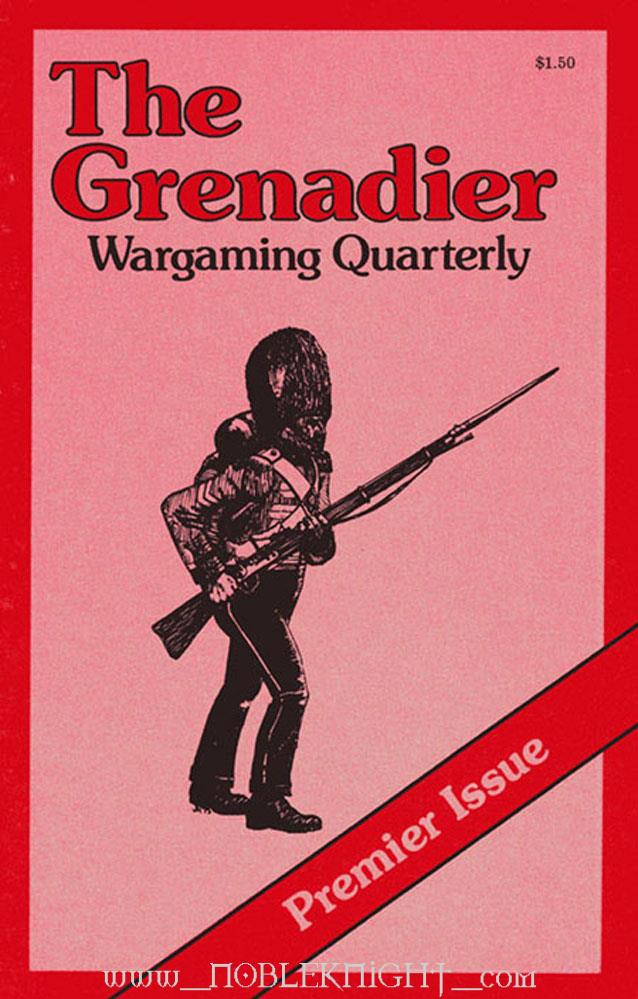 The Grenadier dealt exclusively with Game Designers Workshop products  but always maintained a strong focus on the growing Europa series.
The Grenadier 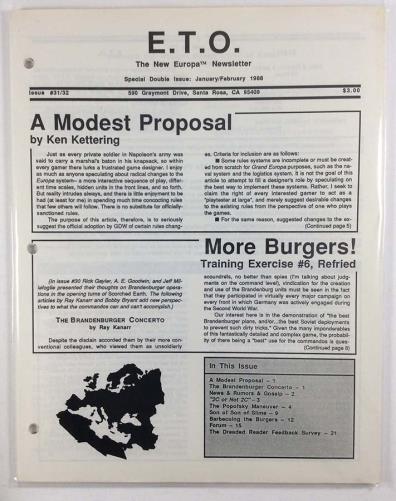 ETO was unarguably the most influential and most circulated amongst a plethora of inofficial Europa newsletters. First published by Bill Stone in 1985 it lasted a full five years before being taken over by Arthur Goodwin.

To the ETO index 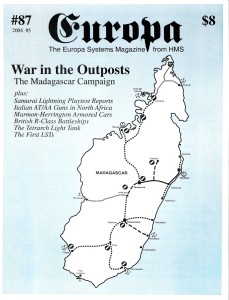 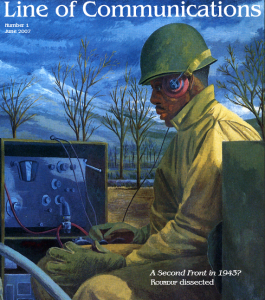 Luiz Cláudio S. Duarte created this submission-based Europa quarterly in 2006 which was published as PDFs only. LOC lasted for 6 quarterly issues and ended in December, 2008, due to lack of submissions.
Line of Communications 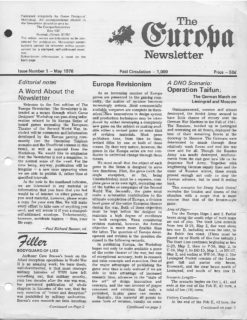 The Europa Newsletter #1 - Page One

During 1976-1977, GDW published four issues of a flier called The Europa Newsletter. The fifth issue became a full-fledged magazine called The Grenadier, and expanded its coverage to GDW’s other, non-Europa offerings as well.
[TEN index]

In 1982 a couple of students at South Dakota State University founded a gaming club called SDSU gamers to play Europa games. In February 1983, the first edition of Nuts and Bolts was published, with Gary Stagliano as editor.  In 1988, Winston Hamilton convinced the staff to merge with Winstons own "The Europa Newsletter", which subsequently took the name of The Europa Magazine (TEM).
[Nuts&Bolts Index] 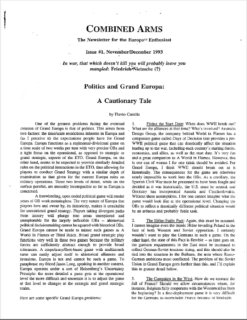 The "Newsletter for the Europa Enthusiast" began publication in November 1993. Flavio Carrillo was the editor and primary contributor. The newsletter averaged 16 pages in length. Features included Politics and Grand Europa, CRT analysis, supply, Grand Strategy, British armor, German infantry from First to Fight through the Second Front, Russian production, Soviet artillery, Grossdeutschland, a scenario for Russia and Japan at war in 1937, and extensive suggestions to updating Fire in the East. 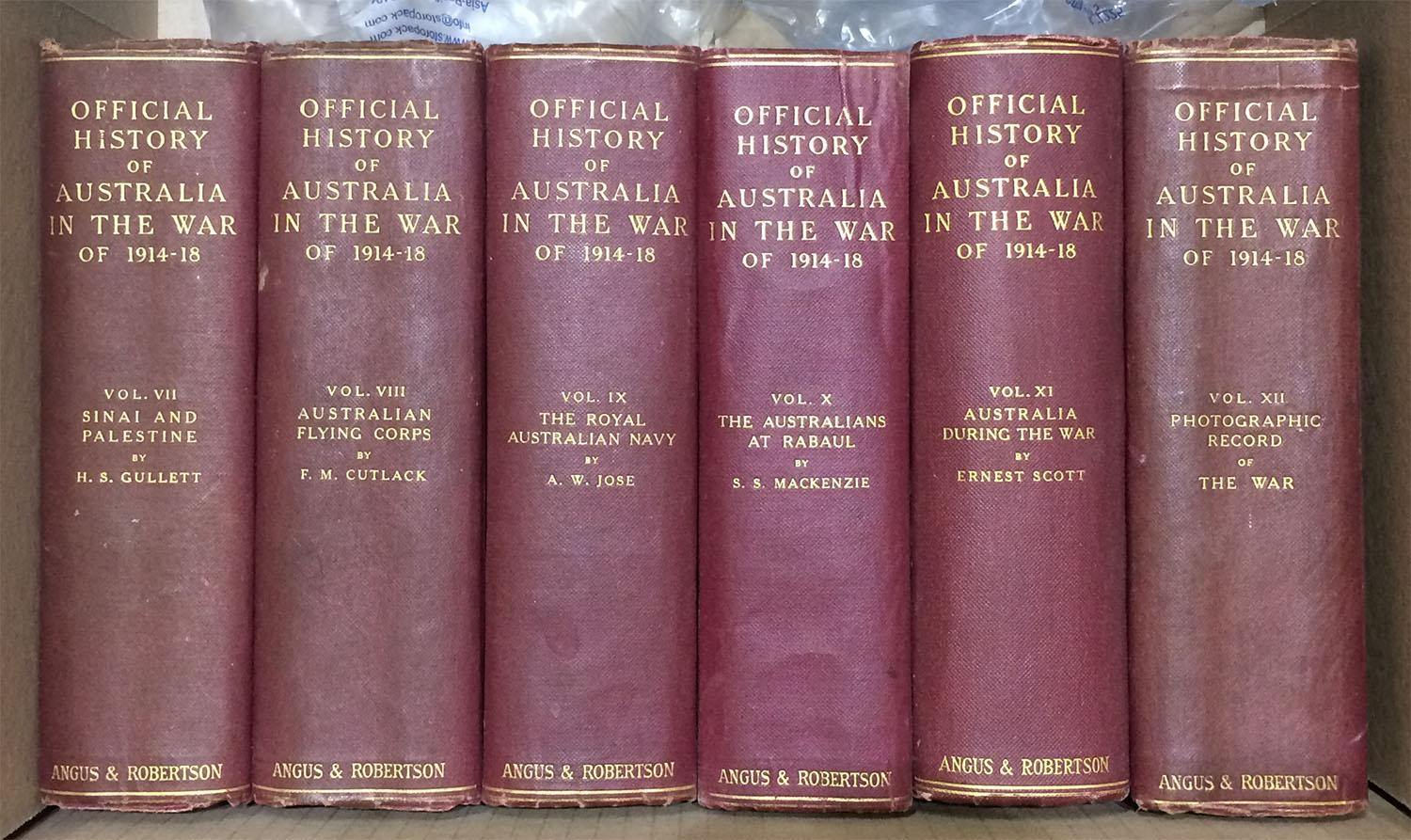 Its been more than a hundred years since the First World War started. Its course and outcome defined most of the 20th century. Receding from public memory into history, it is also long enough in the past for the various official histories of the war to go into public domain. These days, most of the official histories are available online. 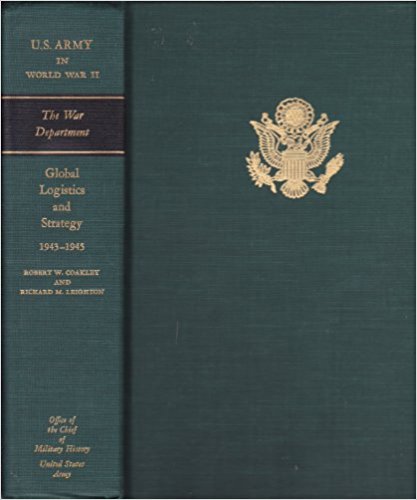 For a lot of participants, the devastation caused by the Second World War meant that presenting an official version of it was a low priority. The Cold War also contributed to delays in publications, since many sources and documents remain classified up to the present, especially in the case of the Soviet Union. However, some valuable scientific work has been published by various contries. 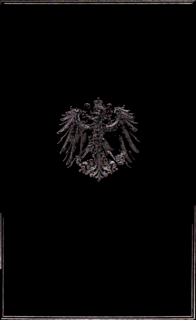 Bibliography of Publications by the Great General Staff, 1824-1919

In Prussia responsibility for the publication of official military history lay with the Kriegsgeschichtliche Abteilung (military history department), which was a part of the Great General Staff. During its existence from 1824 to 1919 it produced a small library of official descriptions of military events. These studies are of varying quality, but since the loss of the German military archives in 1945 they serve as primary sources for prussian military history.

Publications by the Military History Department of the Great General Staff