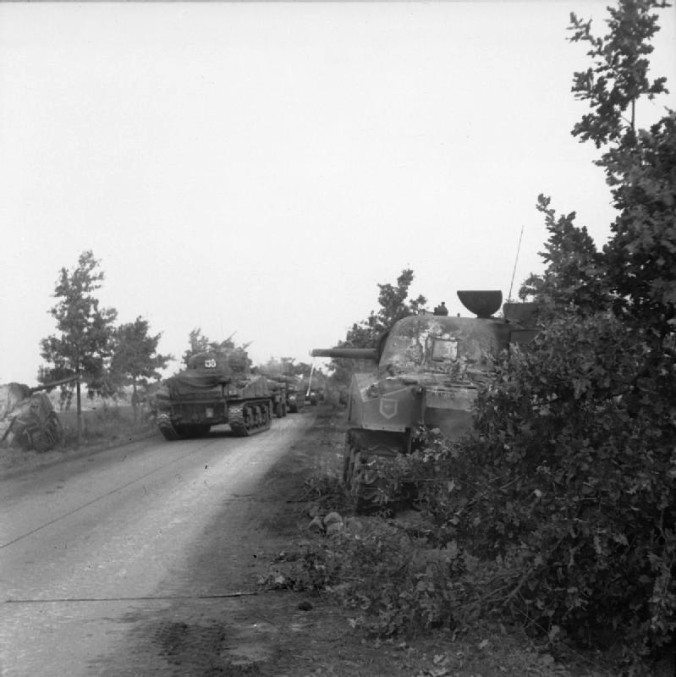 Weather on the 19th was no better.  Due to ground fog and rain, only a few of the flights from England were able to take of, and those were late. 1stAllied Airborne Army failed to inform 2nd Tactical Air Force of the changes, and no close air support was flown for Brownings forces in Holland.  The Germans continued to receive effective air support however. The Luftwaffewas so bold as to raid Eindhoven with 120 bombers, killing or wounding 1,000 civilians.[91]

Student planned a pincer attack to split the Allied corridor using 59thInfantry Division from the west, and 107thPanzer Brigade from the east.  Before this could be executed, 101st Airborne and 8th Armoured Brigade routed 59th Division.  The Panthers and Grenadiers of 107th Panzer attacked later in the day, and nearly succeeded in reaching Son.  While this attack was occurring Taylors third lift arrived, with half the expected troops and guns, followed by a very inaccurate supply drop.  Weather in England was the cause of both delay and confusion.[94]

British 1st Airborne Brigade staged an early morning attack along the north bank of the Lower Rhine which made slow progress until the fog lifted.  By 1000, without the cover afforded by fog, and lacking any air support, the attack ground to a halt one mile from the bridge.  A second attack further to the north by 4th

Airborne Brigade cost the British heavy casualties, and gained little ground from KG Spindler.  General Urquhart was liberated from his attic by the attack at 0715, and he returned to the divisional headquarters in Oosterbeek after a 40-hour absence.[95]  After a quick analysis Urquhart sent reinforcements to the doomed 4thPara Brigade attack.  A signal was also sent to warn the Polish Brigade that the Germans controlled their landing zone.[96]  The Poles never received the message to abort their drop, and at 1600 their gliders landed in no-mans-land between 4th Parachute Brigade and KG Krafft.  Only a few men and two anti-tank guns survived.[97]

The Germans brought their full weight to bear on Frosts position at the Arnhem bridge.  Daylong attacks began with an air raid, followed by shelling and ground attacks from SS KG Knaust in the north and SS KG Brinkmann from the east.  The British still controlled ten houses at the north end of the bridge, but had only 250 unwounded men to hold them with.[98]

September 20th was the last of the four days Browning had promised Montgomery.  It dawned to the same poor weather as the two previous days, allowing only supply missions to be flown.  Although 82ndAirborne received 80 percent of its supplies, the British recovered only 13 percent of 1st Airbornes.[99]

Along what was now dubbed Hells Highway 107thPanzer Brigade staged another attack east of Son.  Once again, 101stand British armor beat them off.  Guards Armoured was broken up to stiffen the two American divisions, especially the position along the Groesbeek Heights.  British and American troops worked together to clear the suburbs near Nijmegen bridge while they waited for the assault boats to crawl their way forward.[100]

The boats finally arrived after noon, and the assault went in at 1500, with air and artillery support.  2ndand 3rd Battalions 504thParachute Infantry Regiment cleared the two bridges on the far shore. A coordinated attack by 505thParachute Regiment and Guards Grenadiers opened the south end of the bridge, and the first tanks crossed at 1910.  Much to the shock of the Americans, with Arnhem only 10 miles away the British tankers stopped for the night.[101]

General Horrocks explained it this way:
“This operation of Cooks (American battalion commander) was the best and most gallant attack I have ever seen carried out in my life.  No wonder the leading paratroopers were furious that we did not push strait for Arnhem.  They felt they had risked their lives for nothing, but it was impossible, owing to the confusion which existed in Nijmegen, with houses burning and the British and U.S. forces all mixed up.”[102]

British 1stAirborne endured a day of uncoordinated German attacks on its Oosterbeek perimeter.  Both sides were exhausted, and neither had a significant advantage in strength. British battalions were down to 100-200 men each, and it was impossible to properly care for casualties.  An agreement was reached whereby the British pulled back slightly, giving the Germans control of several buildings containing British wounded.  Several such temporary tuces were called during the next days.[103]

At his bridge Lt. Col. Frost was short of all types of supplies and the Germans were now using flame-throwers and tanks to dig his remaining troops out of their buildings. Around noon Frost was wounded and turned control over to the commander of the reconnaissance squadron, Maj. Gough.  Four Tiger tanks forced a crossing of the bridge at about1600. Later that night Gough negotiated a truce allowing the Germans to collect 200 wounded from the cellars, including Lt. Col. Frost.[104]

Gough attempted a breakout from Arnhem to the north at 0900, which was not successful.  What was left of Frosts men didnt surrender as a group, some kept fighting for two more days.  With the major part of 2nd Parachute Battalion eliminated the Germans gained use of the bridge.  Frosts small force had held out for 88 hours, with little support, and without relief. [105]

The defenses at Oosterbeek were reorganized, but remained frail.  The Heveadorp ferry was cut adrift after KG von Tettau took Westerbouwing hill on the southwestern edge of the division perimeter.  From there the Germans could observe any daylight river crossing by or in support of the British airborne division.[106]

1st Polish Parachute Brigades main body finally got airborne, but bad weather forced 44 of the 114 Dakotas to turn back.  The Luftwaffemet the air caravan with more than 100 fighters, 25 of which got through the escort to claim thirteen transports.  Aircraft carrying Urquharts supplies also ran into German fighters, losing 23 planes to enemy fighters and flak, and delivering only 41 tons of supply to the British.  The Poles secured a small perimeter near Driel and along the south bank of the Rhine, opposite 1st Airborne.  They were unable, however, to conduct any crossing due to a lack of boats.[108] Had they landed just a day sooner they couldve used the Heveadorp ferry.

A Bridge To Far