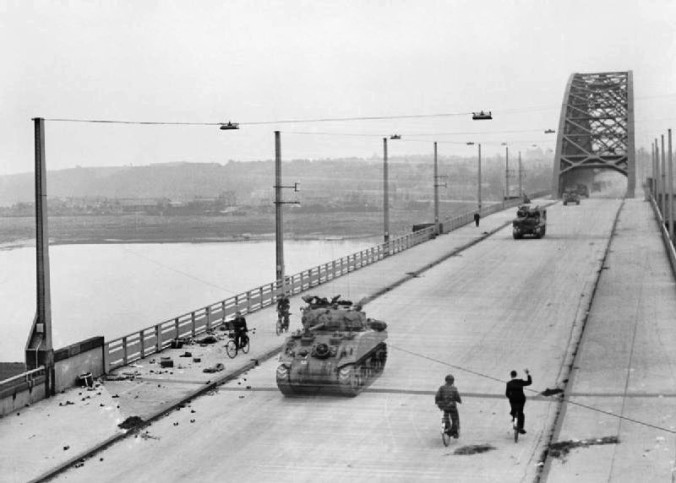 A Bridge To Far

Weather began to lift on September 22, but no supply flights were flown.  Allied fighters dominated the skies everywhere except Arnhem and Nijmegen, where the Germans continued to get Luftwaffe ground support.[109]

The attack organized by Student hit a weak section of the allied line between Grave and Uden. KG Walther, attacking westward, and KG Huber, attacking eastward, cut Hells Highway between 101stand 82ndAirborne. KG Huber placed the bridge at Veghel under fire and German tanks nearly took Uden.  By the end of the day eight allied battalions were drawn into the battle at Uden, fighting under Brigadier General McAuliffe.  Hells Highway north of Veghel was closed to traffic for a crucial day.[110]

The attempt to reach 1stAirborne was taken up by 43rdDivision at dawn, supported by the Irish Guards from Guards Armoured.  Armored cars, once again leading the way, reached the Poles at Driel by 0800.  It had taken four days and eighteen hours since Market-Garden to establish what was technically a link with 1stAirborne.[111] That night Sosabowski crossed 50 men with the four rubber dinghies available to him.  DUKWs and heavier boats were held up by Students attacks.  German pressure along Urquharts perimeter increased, and the British General signaled Browning that relief was necessary within 24 hours.[112]

KG Chill reached Hells Highway south of Veghel near dusk. Owing to these attacks, supply vehicles were unable to use the road for most of the day.[116] The road was finally cleared of Germans late on September 25 by 101st Airborne, with assistance from British 50thInfantry and 7th Armoured Divisions.  Due to mines Hells Highway didnt reopen until early the 26th, but after that it stayed open.[117]

SS KG von Allworden, with King Tiger tanks from 506th Heavy Tank Battalion, attacked Urquharts perimeter on September 25, nearly cutting him off from the Rhine.  A crossing attempt by 43rdDivision resulted in heavy British losses, with no appreciable gain and Urquhart set the withdrawal for that night.[118]

British artillery opened up an eleven-hour bombardment by at 2100. Crossing operations began at 2140 and continued until dawn, passing 2,587 men to safety through the 700-meter gap left open to 1stAirborne. Market-Garden ended at 0550 on September 26. Including wounded, the Germans took 6,450 prisoners. Approximate 1,300 members of 1stAirborne Division were killed during the battle.[119]

Propagandists claimed victory and defeat for both sides.  Brereton classified Market a success.  Montgomery blamed Eisenhower for failing to provide resources, yet claimed the operation was 90 percent successful.[120]  Sober assessment indicates the only strategic use of Allied airborne forces in Europe ended in defeat, but Market-Garden was no great victory for the Germans.  Blame is shared by most of the Allied commanders. Montgomery was in overall command but failed to pay close attention. Brereton made several mistakes including: his insistence on a single sortie per transport per day, unworkable landing zones, and choice of British I Airborne Corps over US Airborne XVIII Corps to command Market. Urquhart must shoulder responsibility for failing to stay in place to command his division. For his part, Horrocks was unable to keep Garden on schedule or get his subordinates to move at night.  The failure of Market-Garden forced the Allies to winter in Holland where their advantage in mobility was wasted.  Stretching to cover the extended frontage forced compromises leading to a weak front in the Ardennes, and facilitated Hitlers attack there.

Field Marshall Model deserves praise for pulling together scattered German units, and quickly ascertaining the importance of Nijmegen and Arnhem.  Colonel-General Student skillfully handled both defense and offense along Hells Highway.  The recuperative powers of German units, and will of the common soldier to fight against great odds and under difficult conditions are trademarks of the Wehrmacht. British 1stAirborne proved they shared those traits.