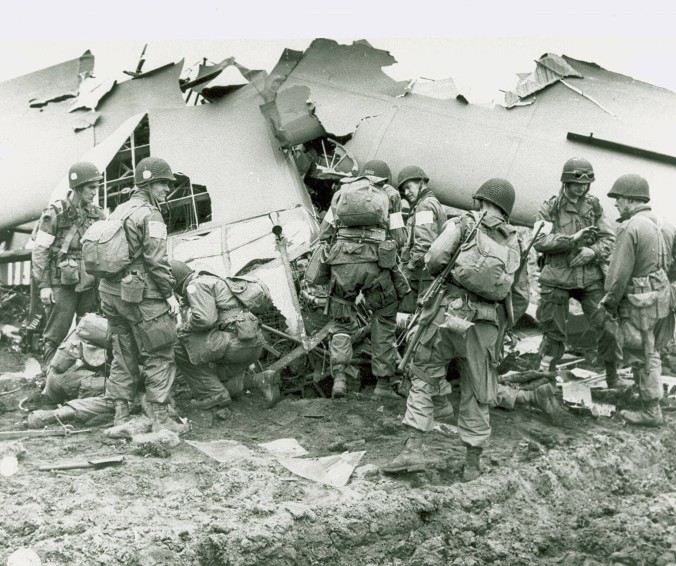 101st Airborne Division troops that landed behind German lines in Holland examine what is left of one of the gliders Credit: US Army Signal Corps / US Army Military History Institute

Beginning the night of September 16 and over the course of the next day over a thousand Allied planes attacked German airfields and antiaircraft positions. On September 17 the first Market transport departed at 945, the last of 1,051 transports and 516 gliders lifted off by 1135. Pathfinders jumped at 1240 and assault troops began landing by 1400.  By 1408 the Allies had landed some 20,000 men, 330 artillery pieces, 511 vehicles, and 490 tons of supplies.  The daylight drops were very accurate, and only 48 transport planes and 71 gliders were lost from all causes.[67]

Watching from his headquarters at Vught as Allied transports streamed overhead, Student remarked: Oh, how I wish I had such powerful means at my disposal![68]  Before nightfall Student received a complete copy of the Market-Garden plans taken from a crashed glider, probably one from I Corps Headquarters. The plans included flight schedules, landing zones, unit lists, and mission taskings.[69]

At II SS Panzer Corps General Bittrich started receiving reports within minutes of the main drop.  By 1430 he issued orders to 9thSS Panzer to occupy the Arnhem bridge and immediately attack enemy forces near Oosterbeek.  10thSS Panzer was to move immediately to Nijmegen and occupy the bridge in strength.[70]  It would take some time to get units moving, among other things vehicles would have to be unloaded from rail cars and troops recalled from Sunday leave.

General Horrocks opened Garden at 1400 with a 35-minute bombardment by 408 guns.  The defending Kampfgruppe(battlegroup) was named after its commander, Colonel Walther, one of StudentsFallschrimjaeger.  This scratch formation consisted of two Luftwaffeparachute battalions, two SS infantry battalions, and 6thPenal Battalion.  Guards Armoured lost nine tanks to Kampfgruppe(KG) Walther, but by 1930 had advanced seven miles to Valkenswaard.  There the Guards stopped for the night. British commanders failed to initiate aggressive patrolling, leaving KG Walther free to regroup and dig itself in for the next day.[72]  Horrocks was behind schedule; he should have reached Eindhoven in three hours.[73]

Gavins 82nd held the Groesbeck heights and critical bridges at Grave and across the Maas-Waal Canal southwest of Nijmegen. They also had part of a battalion in Nijmegen, which destroyed what were thought to be the detonating device. Grenadiers from 10thSS Panzer Division had arrived to defend the bridge however, and Gavins weak battalion was pinned down in the city streets near the bridge.[75]

Urquharts troops dropped as accurately as the Americans, but immediately experienced problems.  It took longer than expected to organize after the drop, especially for the recon squadron.  It wasnt until about 1530 that Lieutenant Colonel John Frosts 2nd Parachute Battalion headed out for Arnhem supported by a few recon jeeps.  1stand 3rdParachute battalions also advanced on Arnhem, each by a separate route.[76]  Crowds of enthusiastic Dutch civilians met the Tommies, further slowing the advance.  German fire was first encountered at 1600 along the northern route near Wolfheze.  1stBattalion had run into SS Major Sepp Kraffts 440 man training battalion.[77]

At Oosterbeek 3rdBattalion encountered hastily assembled German forces rallying around Models abandoned headquarters.  Only Frosts 2nd Battalion found a clear road into Arnhem. They were in sight of the rail bridge when it was blown at 1830 and found the pontoon bridge had been removed.  Frosts men observed 30 German vehicles head south across the Arnhem bridge.  By 2000 2ndParachute Battalion occupied buildings surrounding the north end of the Arnhem road bridge.[78]

Radio communications within 1stAirborne were not working well and General Urquhart left his headquarters to check on his division.  He lost his jeep to enemy fire and spent the first night with Brigadier Lathburys 1stParachute Brigade, out of contact with division headquarters.[79]

September 18th opened with heavy fog closing down airbases in England, France and Belgium, followed by rain lasting most of the afternoon and into the night.  This, combined with Breretons insistence that planes in Belgium remain on the ground while his transports were airborne, reduced Allied air support to a trickle. German airfields were clear however, and Luftwaffefighters flew 190 sorties.[80]

Guards Armoured started off at 0600, and by 1230 managed to sneak some armored cars into Eindhoven where they linked up with Col. Sinks 506thParachute Regiment. Eindhoven had been liberated from the company size German defense force during the morning of September 18. Using bridges over the Dommel River taken by 101st, Guards Armoured passed east of Eindhoven and reached the destroyed bridge at Son by evening.[81]At 1300 two battalions of 327thGlider regiment along with divisional troops, 146 jeeps, and two bulldozers  2,656 men  were added to Taylors force.[82]

At Best a strong force of American paratroopers from the 502ndRegiment was ordered to take the Wilhelmina Canal bridge.  Opposing them was a majority of the 59thInfantry Division, sent there the previous day by Student. German engineers blew the bridge at 1100, and fighting generally died down throughout the 101stDivision area.[83]

Further north in the 82nd Airborne sector Gavin was faced with capturing the Nijmegen bridge.  Lieutenant Colonel Warrens battalion from 508thParachute Infantry Regiment got close to the southern end of the bridge, but was unable to capture it. Two later attacks by fresh troops also failed.  The Germans had been reinforced by part of 9thSS Panzer Reconnaissance Battalion.[84]

Germans troops were active elsewhere along the 82ndAirborne perimeter. At dawn small units began attacking the Americans holding Groesbeek Heights, eventually threatening the southern landing zone. Lt. Col. Warrens battalion, recently withdrawn from Nijmegen, charged across the LZ and cleared it just before the 1300 glider landing took place. Arriving were 385 gliders with 1,782 men and the remainder of General Gavins artillery.  To the north, a German probe was driven off at Veghel.[85]

In Arnhem itself Lt. Col. Frost had about 600 men, mortars and four 6-pounder (57mm) anti-tank guns ensconced in houses covering the north end of the bridge.  Frost also had radio contact with division headquarters and support from four 75mm guns. German infantry, unsupported by artillery or tanks, failed to dislodge Frosts men, and a 0930 charge across the bridge from the south by 9thSS Recon Battalion was routed. [88]

At 1500 Urquharts second wave arrived to a greeting from the Luftwaffe.  In addition to heavy flak, 90 German fighters attempted to intercept the transports and gliders.  Allied fighters managed to hold off the German planes, but lost 20 of their number.  Some 2,100 men arrived on 124 Dakotas and 296 gliders.  The following supply lift dropped 87 tons of cargo, mostly into German laps, with only 12 tons reaching 1st Airborne.[89]

Radio communications within 1stAirborne were almost non-existent. Pressured from the east and west, with its commander missing, the Red Devils were in serious trouble. It might have been possible for the division to salvage a bridgehead using the Heveadorp ferry, first reported on the day of the landing.  Instead Hicks sent the 1st Airborne after its original, and now unreachable, objective.[90]