Weather: The warming from the south continues as the majority of the Front dissolves into thick mud. (Mud in Zone C & D)

Army of Norway: The defence falls back a hex further north along the Swedish border. 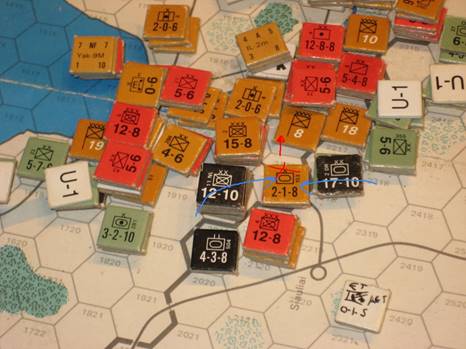 AGS: A dangerous salient has formed east of Poltava where an advancing Soviet Mech Corps cuts SE behind an infantry corps barring its escape SW to the Dnieper.  A 10-10 mech and 14-10 panzer hold ground to try and offer the infantry an escape route but the masses of advancing Soviets threaten to infiltrate through the lines despite the mud which slows movement to a crawl.

The two pockets along the Azov Sea coast between Taganrog and Mariupol, with no chance of rescue, form a defensive perimeter. With their backs against the coast they brace for the inevitable attack.

In the Crimea a 2-6 Marine brigade is eliminated but due to limited supplies and the defenders air and Naval support it takes the combined might of an 18-10 panzer, 5-7-6 infantry xx and 1-2-6 ET to accomplish the sailor’s destruction.

Air combat: In a supreme effort by the Luftwaffe ground support crews all 5 Aborted aircraft are restored to full operational effectiveness in the initial phase. Again the main focus of the Luftwaffe is DAS in which a Ju87R and Ju88A are lost to enemy action.