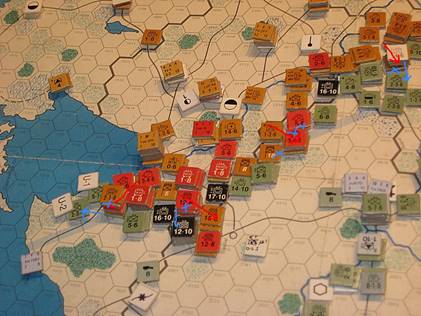 Elsewhere on this front the Soviet attack is bolstered now by arriving artillery divisions and reinforcements and smashes a 50 mile wide hole in the German lines in the centre of the front. Only the lack of mobile units in this sector stops this attack from isolating a large section of German frontage. Even so further to the west where the front curves South a pincer formed by an infantry advance in the north and a southern wing of mechanised forces isolates three Panzer divisions in a loosely held pocket.

Moscow front: After first entering action at Vitebsk in October 1943 and fighting a continual and monumental rear-guard action from there through Osha and Mogilev the German 9-8 artillery division and its infantry accompaniment finally succumb to Soviet action and are eliminated in a surrounded HX result.

Just North of Kiev a 15-8 Mech corps seeks to take advantage of a weak point in the German line where a gap between two Panzer division is held by a pair of engineer regiments and an assault gun battalion. The engineers are showered with Iron Crosses after defying the Soviet attempts to penetrate the line. [3:1( -1) = AR]

South of Kiev the Dnieper east bank is occupied by Soviet forces.  However rather than the frozen and crossable river they had planned to meet the advanced guard encounters a raging, impassable torrent of spring rains swollen by melting ice. The combination of the melting ice, the mud which restricts mobility and the outrunning of their supply lines brings the advance to a shuddering halt, as the forces find themselves unable to mount any viable attack against the fortified defenders. Almost before it has begun the Soviet plan to cross the river at Cherkasy and isolate the bulk of Army Group South has floundered.

The small secondary move south from the Kursk/Kiev continues its drive through Poltava towards Dnepropetrovsk and isolates three full strength German infantry divisions and thier stiffening of Rumanian and Eastern Troops. The eastern wing of the encirclement engages a 14-10 Panzer division attempting to hold open an escape route for the hapless infantry and obliges it retreat by sheer weight of force. 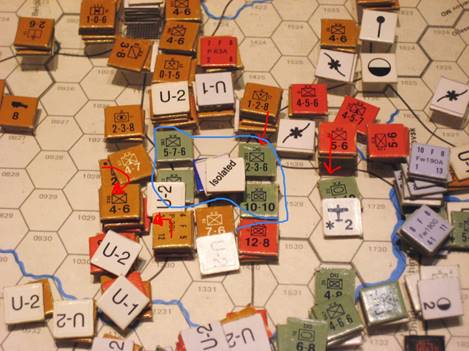 Further east on this front Stalino is captured by an automatic direct assault and mopping up operations begin against various stragglers and German pockets along the Azov coast. In preparation of an assault on Kharkov siege artillery and assaulted engineers arrive in theatre from Riga.

In the Crimea Soviet forces advancing along the isthmus bypass the Rumanians bottled up on the sandbar and continue to press North and East enlarging the perimeter of the landings on the south coast. They receive supply from dumps landed by ships and river transports on the north and south coasts.

To further support this effort the postponed naval and para-drop operation is executed. The landing by Marines south of the rail causeway at the neck of the Crimea encounters difficult conditions and both units become hopelessly disrupted on landing. The marines further west land intact but a stout defence by a pair of German combat engineers prevents them taking the Fort on the road to Nikolayev. Two Guards paratrooper units land at the rail/road crossroads in central Crimea to protect the Marines from any move North by the encircled SS Panzer and infantry divisions.

Air combat:  Soviets successfully inflict 4 Harassment Hits in the south and a rail hit on the Zaporozhe/Crimea line.