Planning: Now that the bulk of the Soviet forces are positioned to assault the Rumanian fort in the Crimea and the bridgehead east of Sevastopol is secure the airdrops and naval landings at the neck of the Crime are rescheduled for late March.

Norwegian/Finnish Front: (2 attacks) The attack along the Swedish border continues pushing a 3-8 mtn III north.  Along the coast the Jana Garrison is assaulted and dispersed.

It has been decided that it will take too much time, effort and RPs to eliminate the cut off Axis garrisoned ports so a 4-6 XX moves into position to block any landings by Axis forces in the rear. 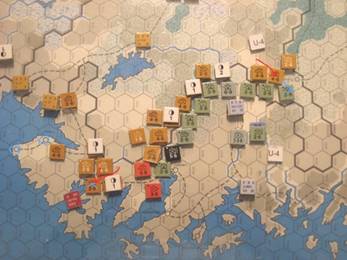 The situation in the far North

Leningrad Front: (5 attacks): Attacks continue along the line resulting in 2xDE, 1X Hx, 2X DR. The Soviets desperately are seeking a breakthrough or decisive elimination and advance two Mech thrusts into the Axis lines; one just west of Riga and a second just north of the Moscow Highway. Neither has a large support train and is open to counter attack but Soviet intelligence reports limited reserves in the respective areas.

Moscow front: (4 attacks) (Per last turn’s commentary units west of Poltava driving South toward Cherkassy are now under the control of Moscow front): Soviet units make two attacks in this generally quiet sector at the northern end of the Front. One automatically eliminates a 7-6 SS infantry division which has become surrounded on three sides by advancing infantry.

Soviet tank Corps race towards the Dnieper with infantry/artillery moving up to tackle stragglers.  In total in this sector 5 infantry divisions are either carded or completely eliminated. 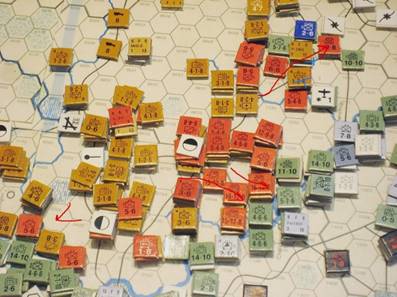 Stalingrad Front (10 attacks): In the extended East-West front between Kharkov and Kiev units driving South from the Kiev/Kursk road assault Poltava from the north and a  Guards Mechanised Corps drives through the city to the south catching a damaged Me109G on the ground. This move threatens to form a pocket of German infantry trapped between Poltva and the main Soviet Front moving West from Kharkov. Along the coast the thrust continues to move West flowing round Stalino and other isolated units many of which are eliminated in the ensuing battles.

In the Crimea a prepared assault is made by infantry, artillery and mechanised units against the Rumanian held fort holding the neck the isthmus. Rumanian resistance is well organised, but the Soviets bring overwhelming force to bear and the defenders are forced to retreat north along the narrow sand spit towards the Shivash.

In the exploitation phase a 3-5 security/0-5 ET construction unit is overrun as is a 2-3-6 cadre east of Kiev.