May I 44 Weather Roll = 1 so clear skies and hard ground from the Artic circle to the Turkish border. So its time for a inter turn report on the last 6 months.

Introduction and summary of the main events of the period

In a sense it’s something of a misnomer to call this period an “Offensive” because there was no set plan or objective for the operation rather, the attacks were a continuation of the Summer Offensive upon similar axis of advance.

Defining events of the winter period were, first, the penetrations between Smolensk and Bryansk that resulted in the somewhat premature declaration by the Soviet High Command that Army Group Centre and been destroyed. While it is true that they suffered heavy losses much of the trapped infantry and armour was extricated by skilful local counterattacks and the changing weather with the subsequent degradation of the Soviet supply situation  resulted in much of the trapped units managing to escape.

The second significant event was the surge in the direction from Kursk to Kiev which occurred in the following months. In a replay of the main German offensive of 1942 which almost brought them the isolation of Leningrad and victory, the initial opening in the German lines was created as much by luck and negligence than by any grand design. It was some time before the Soviets realised the potential of the gap that had opened up between Army Group Centre and South. When STAVKA finally moved reserves into the area the push westwards in this central area gained a momentum of its own, stretching the Axis lines to the north and south of the breach and obliging them to retreat. This eventually unhinged the fortified Kharkov-Stalino line which had for the most part resisted Soviet attempts to break through this position. It is true that by the time the line was given permission from High Command to retreat cracks had started to appear and there were a number of Soviet incursions to the south of Kharkov for which the Axis forces had limited ability to respond to.

The third significant event of this period although overshadowed by the former two was the Naval and Air invasion of the Crimea which is now on the verge of bringing the entire peninsula back under Soviet control. 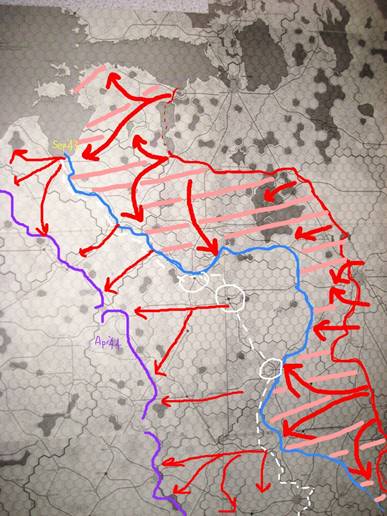 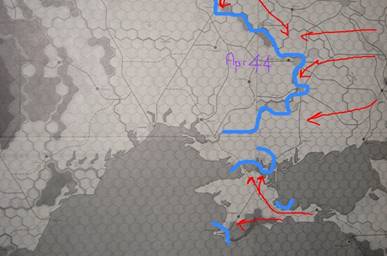 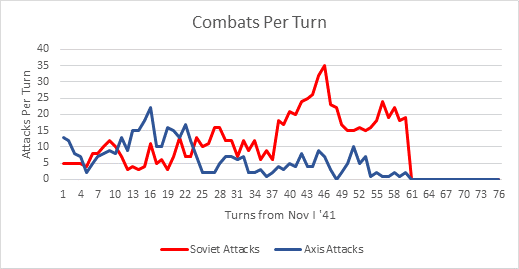 Axis and Soviet Losses per turn

Despite the Axis getting more reinforcements and replacements now than the Soviets in all but armour this is a loss ratio the Axis cannot survive for much longer. 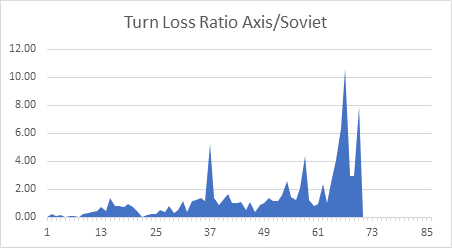 Referring to the map we can see that at the start of the winter period the Axis forces were in a relatively secure fortified position from Riga following the Dvina River through to Vitebsk and then vis Smolensk forming a forward bulge around to Bryansk when the line went south to Kharkov. In the far South the evacuation of the Don bend had been reasonably successfully managed by the Axis forces now in position around the Donets bend and this took the Soviets some turns of effort to penetrate in force.

Despite the continued westward movement of the Axis forces they have exited the winter period in a reasonable condition with only two Panzer divisions in the replacement pool despite having several cardres on map. The Axis Allies forces however have been pretty much decimated during the retreat although new reinforcements and released Reserves are presently moving forward to fill holes in the Axis lines in the new defensive position around the Dnieper bend.

The Axis intention is to try to hold the Soviet forces in this position following the Dnieper to Kiev than in a straight line through the eastern most edge of the Pripet to the Neman River in the north. With the end of the winter they will attempt to repeat the feat of the defence of the Kursk-Orel-Moscow line which held the Soviet forces for a number of months at the start of the 1943 Summer Offensive by the process of forming strong Panzer stacks behind a fortified river line using their mobility and firepower to eliminate any penetrations of the line.

The force levels, of course, are significantly more in the Soviet’s favour now and only the most optimistic Field Marshals truly believe that this can be achieved for any length of time. Indeed, there are already two bridgeheads over the Dnieper which will need to be contained or eliminated.

For the Soviet side the intention is to continue their offensive much as previously. They do have an armour concentration in and around the Cherkassy bridgehead and their intention is to continue to pursue their earlier goal of expanding from this bridgehead in a south-westerly direction to cut off all the troops in the sweep of the river bend. Secondary action around Kiev will attempt to drive directly West to the former Polish border. In the north the intention is to grind forward with more dispersed armoured concentrations chewing into the German lines where the defensive terrain is less challenging for the attacker. Indeed, it has been a frustrating feature of the attacks in the north that the armoured concentrations achieved limited breakthroughs where often the infantry punctured large holes in the German lines which they were unable to exploit. This the Soviets hope to overcome by some dispersal of the armoured forces thus stretching the German ability to respond in force to several multiple low-level threats. The central section in the Pripet is, and will remain, the Cinderella force simply moving forward as the flank attacks force the Axis west and seizing targets of opportunity with infantry-based assaults as the defender’s line thins in response to threats elsewhere. It is not planned to add any significant armoured presence to this sector.