Partisans: With some the front now outside partisan operational areas and the south almost wholly covered by Security forces there are no hits recorded this turn.

Arctic Front: (1 attack); The hex north of the mountain captured last turn is attacked and the defenders forced back.  More importantly than this lacklustre attack is the air combat raging in the skies above. The solitary Luftwaffe fighter in this sector, a Me 110E, is eliminated clearing the skies for future Soviet air activity.

Leningrad Front: (6 diced plus 2 automatic attacks). The advancing Soviet armies have often been described as a steamroller but a more apt analogy would be an industrial shredder. The Soviets make 8 attacks in this fairly short section of front attacking hexes at intervals apart they rip into the German lines chewing holes and advancing forward where results allow. Additionally, bolder now that the force levels are in their favour, they advance Tank and Mech corps in exploitation to trap and delay the retreating Axis forces. 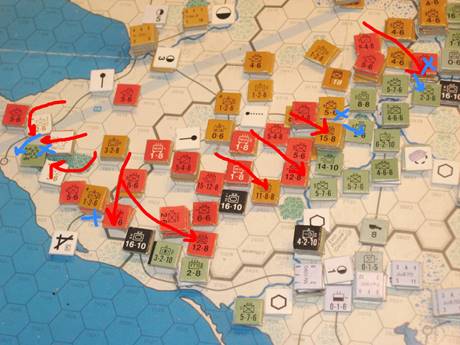 Leningrad Front attacks in the  second two week in April 1944

Moscow Front: (5 attacks). North of Kiev with artillery now emplaced the attackers press forward across the twin river lines retreating an infantry stack and eliminating a fort. South of the city a second bridgehead over the Dnieper is taken where a 5-7-6 held fort falls to a HX.

The Soviets are desperate to break out of their bridgehead at Cherkassy but the defending German panzers prevent a direct move from the forces west of the river. Instead the Soviets attempt to enlarge the bridgehead to enable a two-hex attack in May. To aid this endeavour a massive air attack is launched to give sufficient GS factors for a 5:1 attack. This will have a (-3) penalty due to forts and defending armour AT.

The GS is engaged by three FW190s. Two are returned by escorts but one gets through the screen eliminating a Pe2B. Defending flack Returns the next 4 bombers! And a further craft is Aborted. When the bombing runs are completed, they have delivered 12 effective points against the 14.25 needed! Consequently, the attack goes in at 4:1 (-3) resulting in an AR!

The Soviets flee back across the river and due to bunching on the East bank some large formations are forced back two hexes making a return is exploitation impossible.

If this was not bad enough 30 miles south a second attempt to cross the river also results in an AR.

The Soviets do return powerful forces over the river in Exploitation, but these are reduced in number and defensive strength. Also the 15-3-6 Rkt will now need two turns to return at full combat strength.

Stalingrad Front: (3 Attacks, 2 Auto). A turn of mopping up as the first major assault on Kharkov by massed Siege Artillery and Assault Engineers takes the city eliminating the 8-6 and 7-6 infantry defenders. In a separate action the Poltava Pocket is finally eliminated

To the west the 10-10 pz gr caught on the “wrong” side of the river is assaulted. Reduced to a cadre the remnants flee across the Dnieper to relative safety.

South of Zaporozhe the Soviets are mainly U2 and move west at a crawl but are joined by better supplied comrades force marching from behind.

In the Crimea the whole Black Sea Fleet continues to feed the supply dumps on the beaches placing most of the assault force in Special Supply. The attacks reduce the one remaining infantry division (4-6-6) to a cadre which flees north over the rail causeway.

A small group peels off and moves south to invest Sevastopol which is manned by a lone 0-2-5 Eastern Static unit.

Air Combat: Other than the activity reported above other assisted combats are successful without serious interference from Interception. A few skirmishes take place between Escorts and rail bombers but no bombers succeed in achieving a hit.