The clearing skies signal the start of the long dry summer season and both sides prepare for the easier and more mobile fighting conditions. The Axis immediately take advantage of the sudden weather change by pulling back exposed salients to shorten the line, relocating units which are out of position along the front to more closely counter the Soviet points of attack, and moving forward to attack Soviet units caught exposed or in weak stacks. They manage to form a small number of armoured reaction stacks in the exploitation phase. 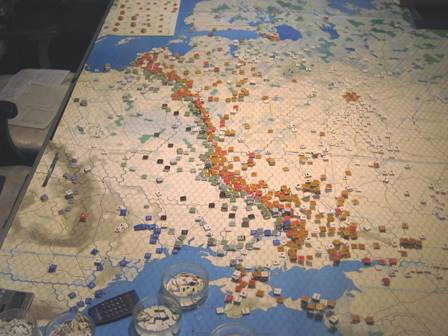 Weather Roll = 1, so Clear from the Turkish Border to the Arctic circle where Mud persists.

Army of Norway: Engineers and Res points reach the front to fortify the line along the coastal strip.

AGN: German armour units at the norther end of the line concentrate to attack the 12-8 Guards Mech unit in the vanguard of the Soviet advance outside Memel. It is completely eliminated in the attack but at the cost of the 4-3-8 SS Panzer Battalion and a 2-8 motorised Engineer Regiment.

Further along the line two individual Soviet divisions are eliminated and a Cavalry/infantry stack is also removed from the board, all without loss by mobile units who move back into the line during exploitation.

AGC: The line is adjusted and reluctantly moves west of Minsk, leaving a lone infantry division to deny the Soviets easy access to the regional capital. The rest of Army Group Centre is relatively quiet, and units are shuffled to take advantage of better terrain.

AGS: Powerful panzer forces move against the Soviet bridgehead south of Minsk and a DH result sends survivors reeling back across the river with a single 3-6 artillery division cadre the only survivor to reach the East bank.

Unfortunately, the Axis are not strong enough to attempt a similar attack on the powerful armoured bridgehead at Cherkassy but the armoured defensive ring around the intrusion is strengthened to prevent enemy breakout from this position.

The Dnieper river between Zaporozhe and Kherson is occupied by Hungarian and Rumanian released reserves reaching the front. A combat engineer and 1-2-6 cadre remain in the Fort at the north end of the causeway to the Crimea to deny the Russians an easy breakout from the peninsular. With no chance of reaching the safety of the fortified/river lines to their north and west this pointless heroic suicide mission seems the best strategy.

Air Combat: All Axis units fly DAS to bolster the defences. Interceptors come of worse loosing 3 units in exchange for an Abort and some Returns.