Weather – Rain/Mud in A. The remainder still Clear.

Down but not out: The Axis side has suffered a massive blow. Last turn saw record losses of over 150 points and this initial Phase sees the surrender of Italy which loses them a further 40 points worth of units. But if the Soviets think this will in any way beat the Axis into submission, they are very much mistaken. This turn the Axis strike back with 9 attacks. They isolate 2 Soviet Mech Corps and raids over the Dvina near Riga eliminate/cadre two Guards infantry. Despite this show of bravado large sections of the Front are in full retreat and 18 forts are abandoned in the movement phase.

Army of Norway: Little action here. There is an argument for pulling the line right back to the Swedish border region compared to the current dispositions spread out along the Norwegian/Finish border with units split both sides of the large lake. But the Soviets are not in a position to menace the line at all and troop levels are quite low. Nevertheless, a contraction could release perhaps 3 divisions for the main front and the exact strategy is under review. (answers on a postcard please!)

AGN: The Axis pull the battered remnant of 2DR back towards the Dvina providing cover by moving forward some previously retreated units and hold 2 hexes north of the river held by Panzers and their remnants plus the bold 5-7-6 infantry which provided valuable flank support.

The bulk of the Panzer forces look to eliminate the forward stack of two 11-8 Mech Corp 50 miles north of Vitebsk but cannot amass enough strength for a direct assault. Instead they attack the hex linking the enemy spearhead to the main front. Lady luck is absent and the 6:1 (-1) attack only manages to retreat the defenders. The German attackers now face a dilemma; should they advance and with what force? In the end they decide that the prize of two Mech Corps is too good to miss and both a 16-10 and 18-10 pz xx advance. The Axis reason that 34 points of pure armour will be too tough for the Soviets – will they be correct? 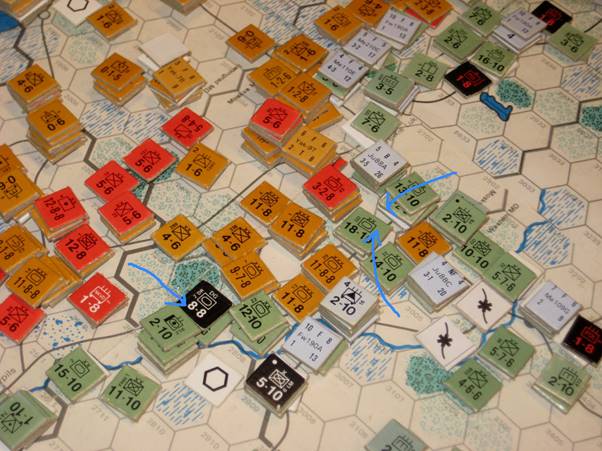 Counterattacks still happen, but the reserves are dwindling fast

On the Veliki-Luki/Valdai rail line a weak Soviet advance is eliminated but this only staves off the inevitable as the line is constantly being punctured.

From Kalinin to Moscow the retreat continues with stay-behind units providing a screen Kalinin is all but abandoned with a lone 8-6 denying Soviet entry and helping to break the tide of the advance.

In Orel Kursk AA fire drives off a T code DAS securing a +3 DRM for the attackers and carrying the day with an elimination.

Along the Kursk/Voronezh line the Soviets fall back in good order (DR).

AGS: The loss of the Italian forces confirms to the Axis if any such confirmation were needed that it is time to “bug out”. The retreat here across the featureless plains in the Don river bend is a far more ordered event than it has been in the north where terrain breaks up the withdrawal.

In the south the whole, mainly Rumanian, line moves back and maintains cohesion. The right flank is anchored at the confluence of the Don and Donets and runs north in an arc mirroring the river until it picks up the few remaining forts lining the upper Don south of the main Soviet drive at Voronezh.

Air Combat: Not too much to report but the Axis lose their T code aircraft (the HS 123 A) to interception.