Moscow Liberated! Moscow is now entirely back in Russian hands. Pressure north and south with the threat of a third direct assault “persuaded” the Germans to withdraw their main forces and the city fell easily to the assault. Elsewhere the Russian Steamroller ploughs on eliminating a massive 151 points of Axis units this turn.  These losses are not sustainable, but time is running out this year for any dramatic Soviet link up at Smolensk as the advance falls far behind schedule. This is particularly true in the south where a lack of Strategic focus has lead them down a cul-de-sac at Voronezh.

Finnish front. At Murmansk the Soviets assault the city where the single mtn cadre folds without resistance.

Leningrad Front: In Latvia the disposition of the retreating Panzer Corps centred around 2 DR presents the Soviets something of a dilemma. They do not seek an armoured fight but the deposition of the defenders and difficult terrain would mean an entire turn out of action to circumnavigate the force to the north. On the other hand trying to slip between 2DR and the Dvina to the south would invite counterattack. They therefore decide that if they cannot go around they will go through and 3 corps with artillery and rocket support attack the powerful Panzer division in a head on assault. A DH cadres the unit. Others attack and eliminate the adjacent infantry cadres.

In the Veliki Luki sector the full force of massed infantry and artillery smash the outer fort line and an infantry division/6-8 panzer cadre are totally eliminated with another 7-6 inf xx cadred.

Vitebsk menaced. The lead Soviet Mech/Armour funnelled between the Dvina and the Veliki Luki fort complex attacks south eliminating the opposition and advancing to within 30 miles of Vitebsk. This offers masses of options in the exploitation phase such as overrunning engineers, security units, swinging West to threaten an encirclement of Veliki Luki or a tight curve trapping an 16-10/18-10 panzer group. In the end however mindful of last turn’s disaster at Voronezh they opt for the safer option of a one hex advance to hold the ground (although a security unit outside Vitebsk is overrun before the forces return to the conservative endpoint.) 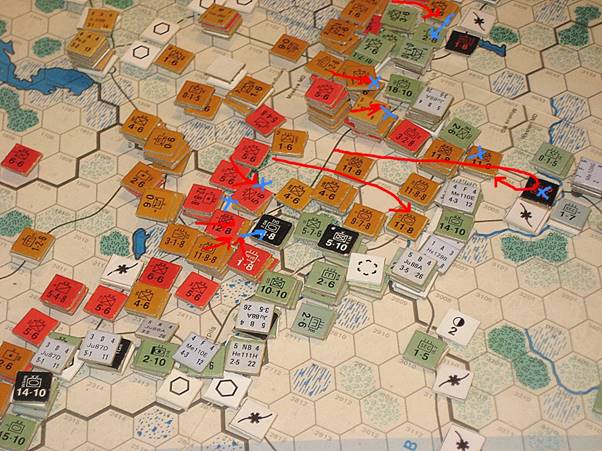 The Soviets advance to the gates of Vitebsk

In the VL-Valdai sector a small advance is made over the rail line hindering east/west movements.  North of Kalinin the Soviets pursue the retreating units achieving a DH against an 8-6 caught in the open.

Moscow Front. The evacuation of the Panzer element of the Moscow defence allows the city to fall easily to the third assault and church bells are allowed to be rung in the city to mark this special occasion. Not only is this the former capital it is the first Major City to be won back from the invader. Immediately to the south 3 x 4-5 divisions are eliminated in separate attacks.

The constant pounding of the Moscow/Orel sector of the line is beginning to bear fruit as more and more defending hexes comprise cadres, reserves or low quality local Eastern draftees. The Axis however are not the only ones to suffer manpower shortages and the high number of exchanges and constant armoured counter attacks have thinned the Soviet ranks with the result that they often cannot advance in a single hex thrust with sufficient force to withstand a German riposte. 2x 5-7-6 inf xxs are cadred from direct assault.

Voronezh Sector. The Soviets decide not to attempt an encirclement of the German attackers but attack and cadre a 11-10 xx Pg before withdrawing east passing through the large infantry force moving west.

Stalingrad Front: In the tip of the Don a 3-6 Rum inf xx is eliminated as it tries to slip away to the fort line. South of the river the toe hold the Axis maintained to facilitate any future operations to the Caucuses is reduced by one hex exchanging against a 4-6 Rum inf xx.

Air Combat: 3 attacks are aided by GS and air battles develop over two of these but in both cases the intruders maintain sufficient support to achieve their goals.

The Soviets mount two large Harassment raids one over the panzer thrust to Voronezh, attempting to hinder re-deployment of the German panzers, and another west of Kalinin designed to prevent units reaching the prepared fort line further west.

One new feature over the battlefield is the arrival of the Tank Busting Code T fighters. These really are valuable assets adding 3 REs of ATEC to a stack. The Soviets make sure these units are escorted by at least 3 other fighters (more in an area of multiple German airbases) to ensure they are protected.

The Long Range bomber force is boosted by the transfer south of the squadrons which had been supporting Arctic Operations. Not accustomed to facing significant fighter opposition and certainly not the indominable FW190 three of the four transferees are lost on their first sortie in the south.