Partisans: Partisan activity is low this turn with only two rail breaks.

Finnish Front. Soviet forces from Murmansk move NW to set up an attack on Petsamo. In the Western edge of the line reinforcements arrive with attack supplies and prepare to fight towards Kautokeino.

Leningrad Front: The Soviets consider how best to break out the two 11-8 Mech units Isolated 50 miles north of Vitebsk. The Axis have placed an armoured ring around the trapped units and even if they could stage a breakout there is nowhere to go to link up with the main line.

The only other option is a frontal assault against the 18-10/16-10 Panzer XXs barring the way back to the Soviet front line.  The Soviets are conscious that this will take all their forces and air power but calculate that a total commitment will produce a viable attack. They allocate all their forces and local air power to the task. German Patrols, Interception and Flak whittle away the air cover but with just one point spare enough survives for the attack to proceed. It does with a HX as the result. A great outcome for the Soviets who cadre two full strength Panzer Divisions for the loss of a 9-7-8 tk xxx reduced to cadre and some rocket/artillery regiments/brigades. The 11-8s move back to the main line. Although successful the Axis have checked the Soviet advance to Vitebsk which is being reinforced daily with fresh troops. (A parallel attack does unseat a fortified defender and infantry advance along the north bank of the Dvina.)

The Soviets launch an attack against the North bank Fort in front of Riga but the 5-7-6 defender stands firm.

Veliki Luki is assaulted by powerful infantry/Artillery forces and another fort falls.

The VL/Valdai rail line is breached again with a weak probe south to the East of V.L.

Kalinin Sector: Kalinin is bypassed and surrounded as forces try to reach the second fort line. For the most part here and south to Kaluga Axis rear-guards prevent any significant pressure being brought to bear against the secondary fort line.

Moscow Front: A small breakthrough is made south of Kaluga and a number of penetrations of the Axis line south of here. One defensive position which has withstood repeated attacks finally falls and the river bend directly East of Bryansk is crossed. The Soviets however fail to eliminate a 6-10 mot xx/SS Regiment combination which retreats to safety.

A narrow front attack in the Kursk area retreats the defenders and a tank Regiment advances to clear the fort. However on hearing reports of powerful enemy tank forces in the area it withdraws in exploitation.

Voronezh Area: Realising that they have led themselves down a strategic dead end the Soviet tank and mech corps from the Voronezh battle transit back through friendly lines to reposition themselves for a push directly on Bryansk. This move takes them close to a 16-10 Panzer unit holding a return frontage of the Axis line as it transits from an E-W to a N-S orientation to the West of Voronezh. In early morning fog a confused meeting engagement occurs with 5 Tank and Mech Corps engaging the Panzers. When the fog clears the bulk of the Panzer division lies shattered on the steppe with a remnant withdrawing SW.  In exploitation the Soviet Tanks continue on to prepare for a major assault next turn.

Voronezh itself in besieged and the Soviets press on West puncturing the mainly German line in three places. 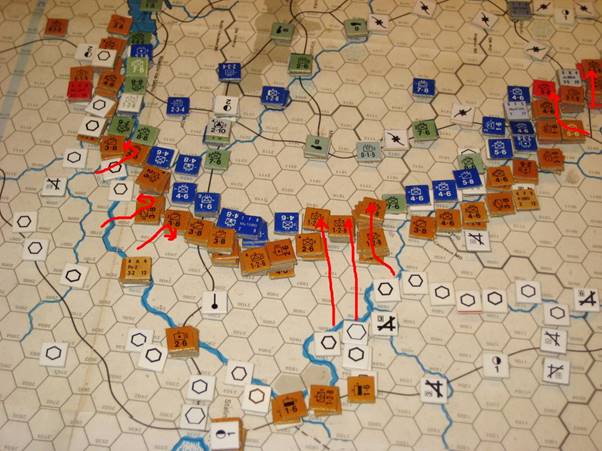 The Soviets cross the Don in Force

Stalingrad Front. In the bend of the Don the Soviets smell blood and except for a small force guarding the rail crossing at Stalingrad abandon to a man the fortified position they have held for over a year They charge over the river and catch up with the fleeing Rumanian Army before it can reach the safety of the Donets river. In the south the Rumanians acquit themselves admirably repulsing the attackers on three separate occasions but it is a different story at the north of the line where 50 miles of front ceases to exist. Only the complete absence of any exploitation capability in the Russian Stalingrad Front Army prevents a complete disaster.

(Ed Note: it seems that in their haste to leave their foxholes the Soviets have displaced some of their forts eastwards. All Soviet forts along the wide part of The Don are adjacent to it except the two running E/W at Stalingrad.)

Air Combat: As reported above most of the Medium range aircraft in the Leningrad front assist the breakout of the surrounded mech corps.

In the Kaluga sector to support the intrusions in the Axis line and in an effort to limit German Panzer mobility a large Harassment raid is launched with 13 hits spread over 8 hexes. Elsewhere 3 DAS missions are made supporting the T code aircraft and the Long Range Bomber (LRB) force achieves 5 rail hits mostly in the North to try to isolate the Vitebsk area from the remaining rail net.

With the opening of the Stalingrad Front a record 32 attacks are made this turn.