The Soviet snowball is gaining momentum. As the Axis lose troops and thin the line to fill the gaps more opportunities are opened up for Soviet attacks. The German reactive groups which did so much damage a month ago and have caused the Soviets to adopt a steady approach are now forced to dissipate to cover the line. True, they can mount hit and run attacks against the attackers but as they spread out they loose mass and the ability to concentrate. The Soviets by contrast have more and more targets to attack and do so this turn with a total of 24 attacks – the most ever mounted. The kill rate however is disappointing and not the highest but far exceeds the ability of the Axis to replace the loses further weakening their overall position. Is it a matter of time before the damn breaks or will Axis counter attacks, where mounted, blunt the Soviet spearheads before they are overwhelmed? The Soviets avoid a direct tank on tank conflict because they are weaker overall in armour but teamed with artillery divisions these units pack a powerful punch and a strong defence against any riposte.

Partisans: The Axis step up security patrols and only 2 rail hits are made this month.

Finnish front. The Soviets continue to reduce the Murmansk perimeter and eliminate a 6-8 mtn division but only achieve a retreat further west near Petsamo. In the far West reinforcement yomp up the trail laden with supplies to fight back against the recent Axis push out of Kautokeino.

Leningrad Front/ Narva/Pskov Sector; The two sectors merge as the German line retreats south out of Estonia into northern Latvia. 6 attacks completely annihilate two surrounded pockets outside Tallinn and West of Pskov and the Axis line is punctuated in 3 places. The presence of strong Axis armour formations and high ZOC/Terrain costs limit the advance which continues to be slow and steady on this front.

Veliki Luki Sector: In a repeat of last turns assault a direct attack south is mounted by three tank armies against a stack with a 13-10 pz as its primary defender. This time instead of a retreat a DH results in the cadering of the Panzer. A surrounded 6-6 inf xx also receives a DH and is annihilated. 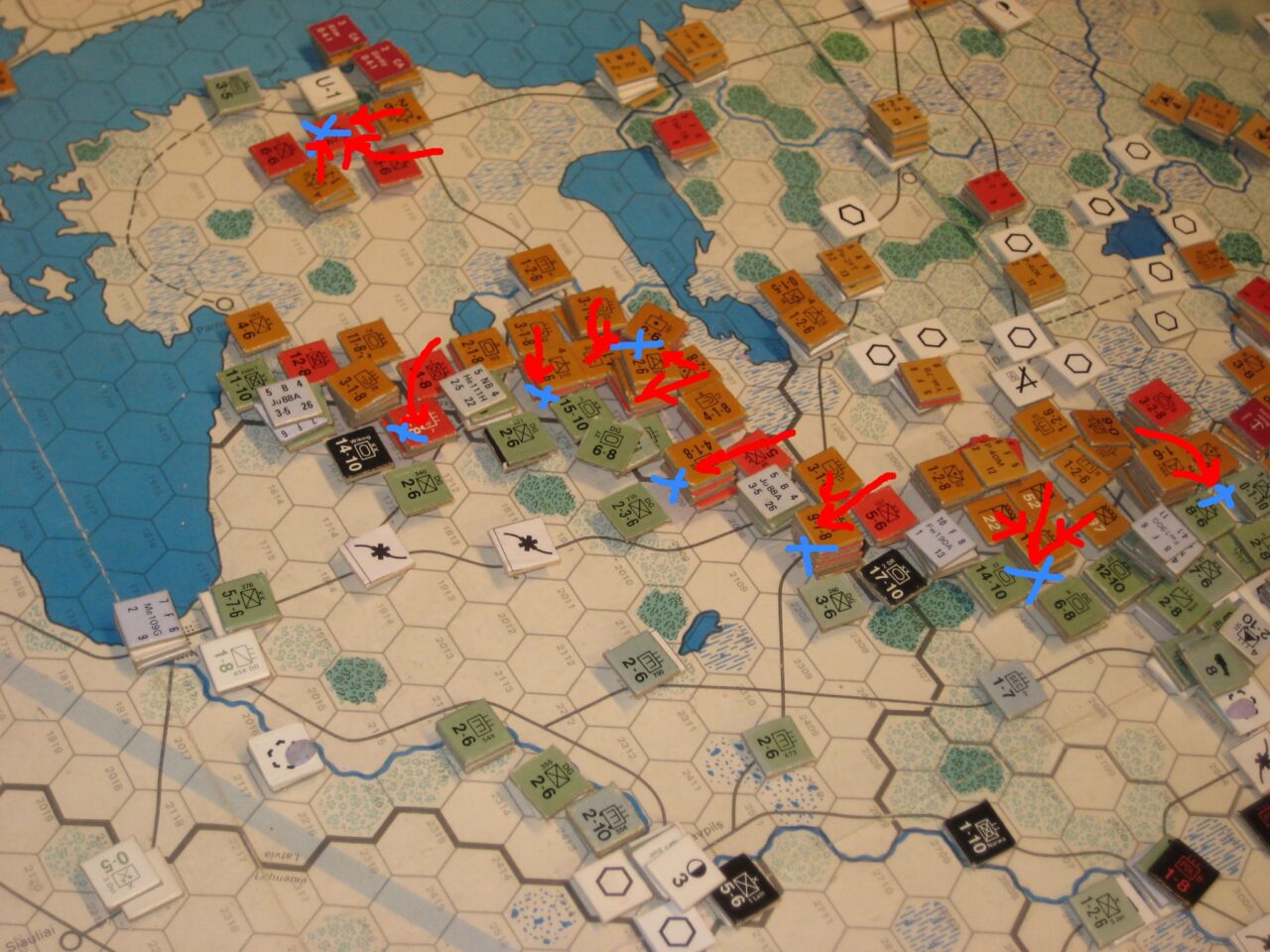 Kalinin Sector: The infantry pincer attack started last turn eliminates the link stranding a large stack at Vishniy Volochek but an Exchange result weakens the Soviets who decide against an advance due to two 16-10 panzers in the area and content themselves with isolating the town and it’s defenders by ZOC.

Moscow Front: Their attempt to advance and surround the remaining Axis toehold at West Moscow thwarted the Soviets decide on a direct assault. The attack is poorly co-ordinated and launched before three Guards Rocket divisions have time to fully register their tubes. Furthermore, alerted by a defector the Axis take cover and weather a desultory bombardment leaving them free to emerge from the cellars and easily ward off the Guards infantry/Tank/Engineer attack which follows (NE).

South of Moscow: The line between Moscow and Orel is now mostly being waged west of the river as the defenders are winkled out of their forts one by one. Three attacks in this sector cause more divisions to be cadred. The resulting advances are cautious because earlier Axis counter-attacks have taught the Russians the hard way not to plunge headlong into a single hex cul-de-sac but rather to wait for a two hex front or corner attack to advance the line. They are content for the Axis to feed fodder into the line for elimination until such opportunities arise.

Outside Orel an assault on the fortified ring fails with no loss or advance.

At Kursk however in a replica of the above attack an infantry division is cadred and a fort eliminated (but the victorious 12-9-8 Guards tank after eliminating the fort pulls back in exploitation.)

Along the Voronezh/Kursk road three attacks fragment the line inflicting more damage but careful retreats and some back up units provide the attackers with no exploitation opportunities worth taking. 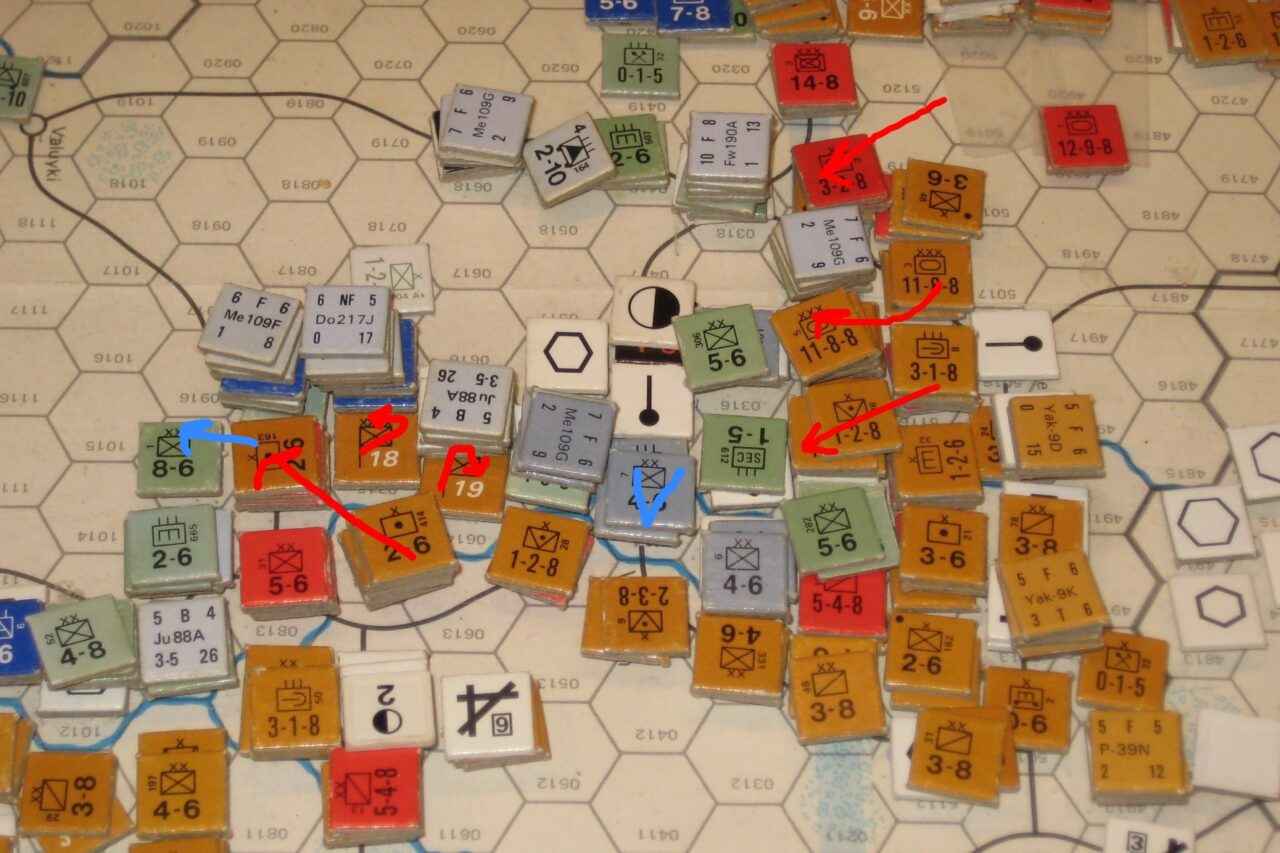 Voronezh Sector: The infantry/artillery drive continues south of the city and while two separate bridgeheads over the river are successfully merged the direct attack SW fails and no significant advance is made.

Nevertheless the attacks north of the City are placing the defenders in imminent danger of being surrounded and isolated.

Stalingrad Front; Due to the continued expansion of the Moscow Front administrative and command control of all action originating south of the line Kursk/Voronezh is transferred to the Stalingrad Front commander for future reports.

Air Combat: A carpet bombing mission is launched west of Moscow by the short and medium assault bombers based in the former capital. 2 more hits render the Moscow Rail line unusable and surrounding hexes are blanketed by 15x 1 pt Harassment hits designed to slow or prevent significant reinforcement into the sector.

As before the Long Range bomber force is less successful scoring only two rail hits in the Minsk/Poland/Lithuania regions from 10 single bomber missions.