R&R (Rescue and Riposte) In the Arctic the Axis launch an operation that eliminates a large section of the Soviet front line.

In the south of Estonia the trapped troops are rescued by counter attack although for one infantry division this is it likely to prove a brief respite.

Between Orel and Kursk the tank on tank battle continues as two more tank corps and two motorised corps are obliterated.

Finland and Army of Norway: A light division arrives at Alta and marches to join the fight at Kautokeino attacking with the Mountain division and mountain artillery already in situ they launch a devastating attack across 2/3’s of the sector eliminating in one sweep 64 miles of Russian front Line troops for the very economical cost of 1 Res pt.

Elsewhere all hold in place with one Res Pt being shipped along the coast from Alta to Kirkenes. 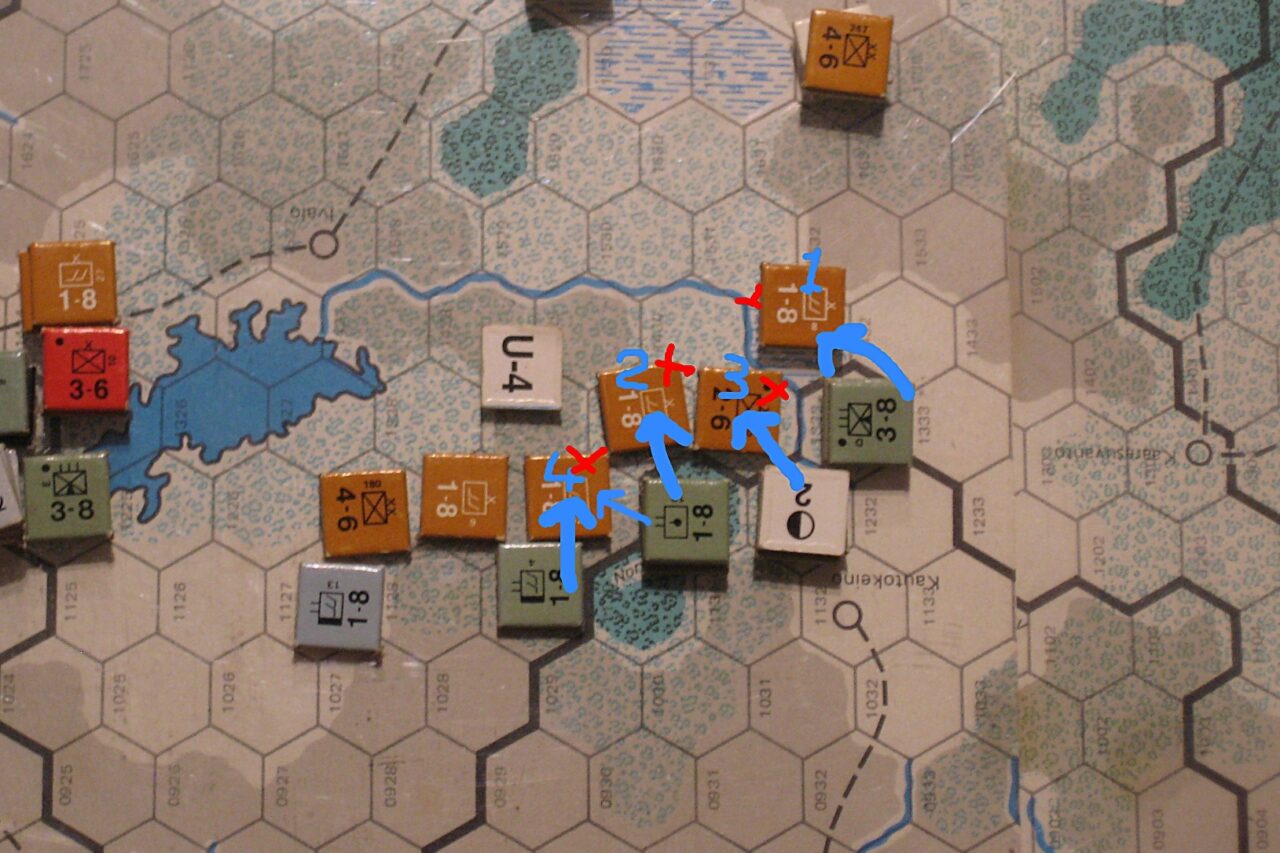 AGN; Narva/Pskov Sector: The units in the Forested and Swampy terrain screening Tallinn hold fast and await their inevitable fate, they are ordered to “hold in place until relief arrives” which they correctly deduce is code for “no rescue is planned”.

In the south of the former Baltic state a double attack on the forces which penetrated the MLR at Pskov are is executed and the trapped forces rescued however the front line established in Exploitation excludes the infantry division in the forests adjacent to the lake as to include it would extend the line into a cul-de-sac and risk further encirclement. At least it has been brought back into supply. (The Axis would have liked to include it in the attack which would have allowed an advance south but to do so would have sullied the AECA and risked an exchange and there are not enough Armour assets to have raised the odds to avoid this.)

As a general principle the Axis are averse to use their Air Force as flying attack artillery except to top up a small shortfall or for critical attacks preferring instead to use the Airforce for DAS.

The force levels in this sector are now such that the Soviets can pick on most hexes at will and eliminate them, The Axis see this as a delaying force giving time for the Dvina River line to be fortified where they will make their stand.

Veliki Luki Sectors: No possibility for counter attacks here the Axis contemplate falling back to the Veliki Luki fortified hub but decide to stand fast gaining some reinforcements from troops moving West from the Kalinin Sector and maintaining a continuous front while the line fall back on the Dvina.

Kalinin Sector- The Axis have no significant reserves here and the terrain is too difficult for a “Hit and Return” attack from Kalinin so the pincer move on Vishniy Volochek is unchecked (pardon the pun) and the forested crossroads reluctantly evacuated. The focus of so much attention over the last two years, battered by assaults and key to German operations to the East the pressure now is too great so weakened are the defenders. In reality, although of significance in terms of morale the practical importance of this junction has waned to insignificance now the front has shrunk back. It is true that the rail line is needed in winter but in the summer months supplies can arrive from the rails further south. Not admitted publicly OKW is practicing Wargames which allow for a complete withdrawal from this sector dependant on the fate of Kalinin and/or their tenuous grip on the capital. The loss of this junction may, at worst, hasten this decision.

AGC; North Moscow Sector; The Soviets retreated, the breach is sealed and engineers move in to re-fortify.

South Moscow Sector: Defences are prepared against the continuing assaults.

Orel Sector: The isolated Tank corps/Brigade stack is surrounded and annihilated to the last man.

Panzers move back to replace the concrete forts previously lost with steel.

Southern Sector; Infantry and support units are reinforced by armour and mech units in an attempt to check any move south while battered infantry forces north of Voronezh abandon forts to shrink the perimeter and maintain contact on their left flank.

AGS: Troops continue to be bled off the Don defensive line but this particular cup is now running dry. The Soviet units West of the Don are for the moment unassailable so are simply contained.

Air combat: Most aircraft on Das a smattering of intercepts result in losses of 1xJU88A, 2x, JU87D for a P39D.