I added an exclamation mark to the number of Soviet attacks last report because it appeared to be the highest number of combats they have initiated in a turn so far in this game. I have since checked and discovered this to be the case. It occurred to me that it may be interesting to do some more detailed analysis on the number of attacks per side/ kill ratio i.e. losses/Attacks etc.

I have, therefore reviewed the reports and added the data to my Losses Spreadsheet.
Unfortunately, I did not keep record the number of attacks for either side till Sept I ’41 then just the Axis till Nov I ’41 when both are recorded. So this analysis omits the early Axis glory days. Nevertheless, the data proves an interesting read.

It may be supposed that both sides use the same CRT the loss ratio would be similar, but there are several factors other than just the CRT to consider.

Let us examine each in a bit more detail:

Firstly the “appetite” to take attacker losses. In part the comments under this section may reflect my personal playing style rather than a principle that can be applied to the sides per sae. It seems clear to me that the Axis player should be far more reluctant to take losses. True he can recover losses more efficiently via special replacements (so a loss of 20 points is effectively a 16 point loss for the Soviets but only a 15 point loss for the Germans). The Germans in particular rely on fewer, higher quality, units which are thus indivisible and unless very careful the German attacker can end up taking losses over those essential. In comparison the Soviet player has far more smaller units and can usually find the exact “change” needed. Both the above points are marginal compared to the real determining factor which is the vast disparity of manpower reserves available to the two sides. The Soviets in effect have units to burn if they can survive the initial onslaught and a “War of Attrition” plays right into their hands. The Axis must in my view therefore only attack at odds where an EX or HX is possible only to secure critical terrain, communication centres or tactical advantage. As a result of this their attacks will on average be at a higher odds/DRM than the Soviets and likely therefore to have a greater kill rate. It should also be noted that I have not consistently reported isolated losses from non-combat. Where noted therefore I have included these as losses inflicted as combat losses for consistency. This will also be a marginal effect.

Secondly Die roll modifiers. The Die roll modifiers available to the two sides are also not entirely symmetrical. The Soviet armour starts with a number of disadvantages, especially the mobility limitations which restrict its attacking usefulness particularly in the early months. It also takes some time for the Soviet Forts to be liberally available. Consequently, the Axis enjoy a considerable DRM advantage particularly early in the game in the summer months. Whereas a DRM roughly approximates to a column shift there are some anomalies such as the 1.5/1 column and the infamous 5:1 with -2 plus modifiers.

Thirdly unit density plays a part in understanding the statistics. In the early years when the Axis are ascendant unit density is generally a lot lower so they will make far more attacks on smaller value stacks compared to the Soviets who mid game are generally attacking larger stacks. (To be clear though the losses reported are the replacement costs of the units lost thus an 8-6 infantry division is reported as a 5 point loss when cadred) Thus from a losses inflicted point of view this method of calculation will tend to reduce the losses over and above the CRT result for both attacking and defending units of both sides although because they have more cadres will tend to massage the German losses in particular down a bit).

The weather effects work indirectly by effecting the DRM for the Soviets in the first winter and thereafter the loss of armour effects which generally favours the Soviets. This shows in the data because the number of attacks follows a seasonal rhythm more closely than the loss data. For example, the Axis attack more times each turn than the Soviets from the Start until Oct ‘42 when the Strategic Initiative changes except for the First Winter where the Soviets are the dominant attacking force.

Air Power. Air power can add attack factors and increase the kill rate and both sides have periods of aerial ascendancy but I have not been recording odds achieved so cannot analyse the relative combat effectiveness per factor only the relative lethality per attack so not much more can be added under this heading. 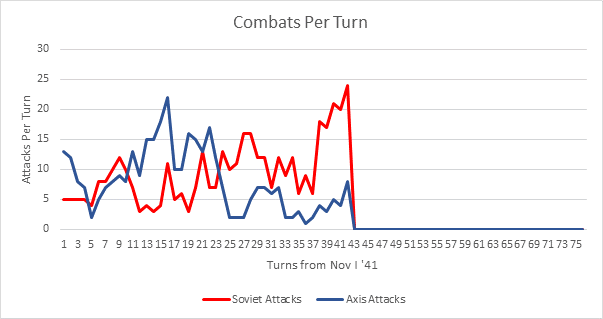 What do the figures show? Here are the highlights from the statistically invalid set of 1 game:

What surprised me about this data was the high rate of Axis attacker losses I had expected it to be a lot lower, however 48 of these were lost in the initial turn and a further 97 in the winter of 41/42 when the Axis were desperately attempting to deliver a killing blow to the Soviets. What was expected was that each Axis attack is more lethal than its Soviet counterpart. (and German units will be recovering more from Special Replacements.)

The lack of data for the early months is frustrating but empirically one may assume it will considerably increase the German Kill Ratio. I will let the reader pick out any other highlights of interest, suffice to say I have been crunching these numbers for 3 nights now and hopefully they will stand up to scrutiny but please report and anomalies or obvious errors and so I can correct them.