R&R – (Rescue and re grouping). The swift armoured response of the German forces requires a turn of consolidation in the south. 4 Tank corps are isolated west of the wall of steel erected between Kursk and Orel and a breakthrough is needed to bring them into supply and safety. 3 are rescued but one cannot reach home so marches NW to interdict the Bryansk-Orel rail line.

Whilst the dash and élan of the southern breakout requires a turn of consolidation this is not so in the north where the slow, steady push on the German forces in Estonia finally cracks the line and the resulting exploitations isolate 5 divisions and 4 REs of cadres and support troops.

Partisans: With many districts completely covered by security assets only 3 rail breaks are inflicted this turn; none of which are in critical areas.

Finnish front. The Soviets continue to reduce the Murmansk perimeter, but their efforts are repulse by fully supplied defenders.

Further west a Luftwaffe penal battalion is retreated into Petsamo.

Leningrad Front:  Narva Sector; The attackers concentrate their attacks into two main drives. The smaller of the two including just one Guards Mech Corps with massed infantry and artillery drives directly West smashing a hodge podge defence of cadres and an 88 flack unit and hooks north to the outskirts of Tallinn trapping the Security division stationed there and the two divisions and engineers in the forested and swamp terrain near the coast. Any move east by these troops is barred by a screen of Guards infantry and Naval Gunfire support. 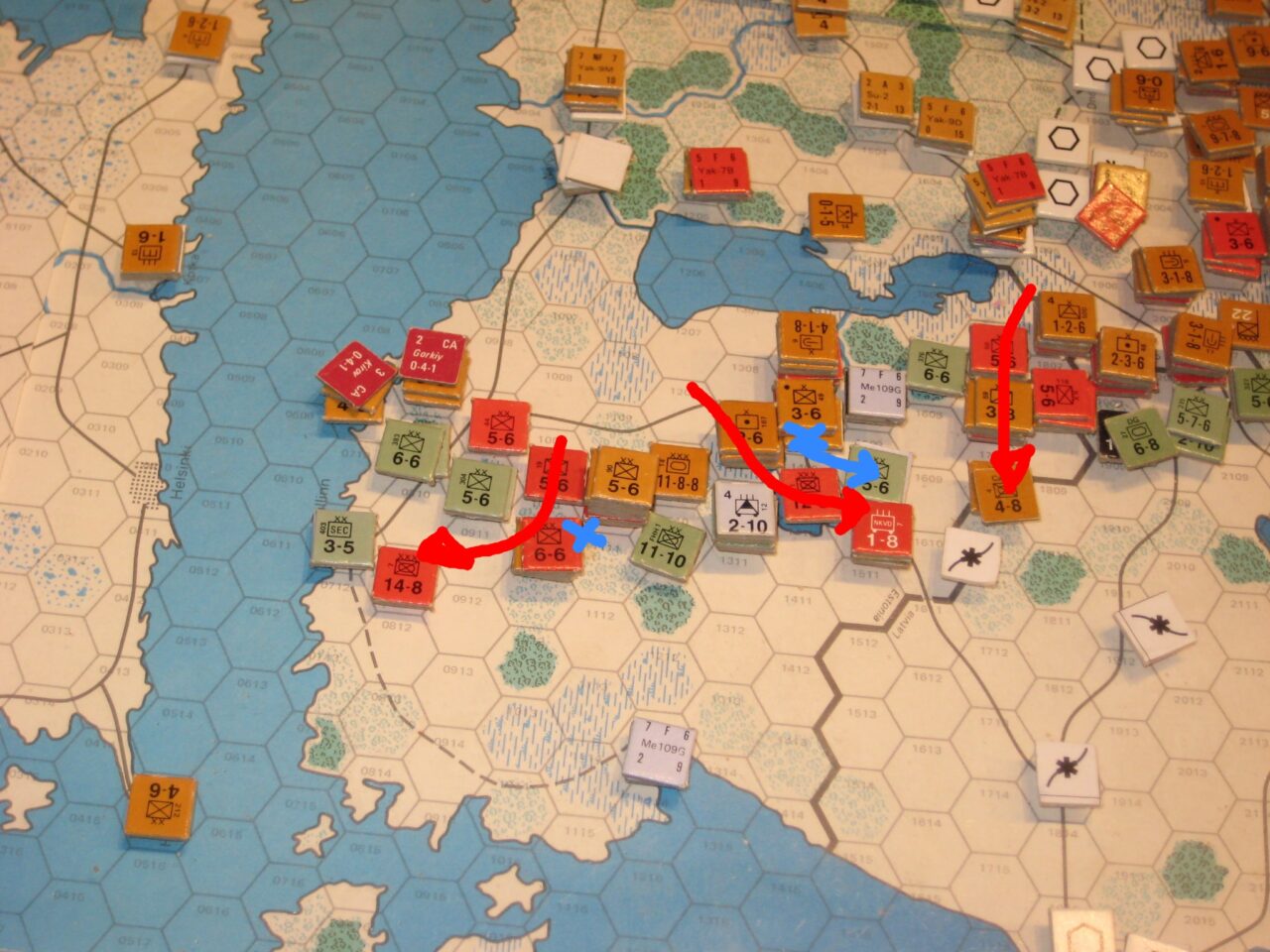 Pskov Sector; The unprotected gap courtesy of local Fighters out of Pskov driving off a Harassment mission allow an infantry force to advance 16 miles and a lone Cavalry division to penetrate 30 miles into the rear of the MLR. In exploitation a 4-8 mech cadre joins the Cavalry unit to prevent overrun and the advancing Mech/Tanks from Tartu move towards these units and trap and isolate a further 2 divisions and a 5-10 SS mech unit adjacent to Lake Peipus. A massed assault just south of there cadres a 14-10 pz.

Veliki Luki Sector: A direct assault south is mounted by two tank armies against a stack with a 12-10 pz as its primary defender. The German units retreat without loss but are now holding only 30 miles from the vital communication line serving the East/West MLR between Veliki LUki and Kalinin.

Kalinin Sector: An infantry pincer attack is developed by a new thrust close to the small lakes in the northern Valdai Eastwards threatening to meet the continuing drive West from north of Kalinin. The noose is tightening on the Axis hold of the forested junction just north of Vishniy Volochek a junction they have held against the best the Russians could throw against them all through the long cold winters of 41 and 42 and the summer before it.

Moscow Front: North Sector: A rescue attack is mounted against the 12-10 pz trapping the two Tanks corps west of it. To aid the attack the entire Moscow air defence is mobilised adding a full 35 points to the attack. The result only retreats the defenders, but the Tank corps and artillery xx is recued.

South of Moscow: A German fort which occupies the oxbow system between Moscow and Orel and is located East of the river is assaulted, ironically with some soviets attacking back East over the bend from their positions west of it. The hex is cleared as is a second on the direct route to Bryansk but the going is a slow grind with dire consequences for any single hex advances.

Outside Orel a lone 0-1-10 Flack unit passing supplies to a trapped 7-6 in an outlying fort is over-run and the 7-6 subsequently eliminated. Another assault against the fortified redoubt dispatches a Panzer cadre, light inf xx cadre and a 2-8 Stug. 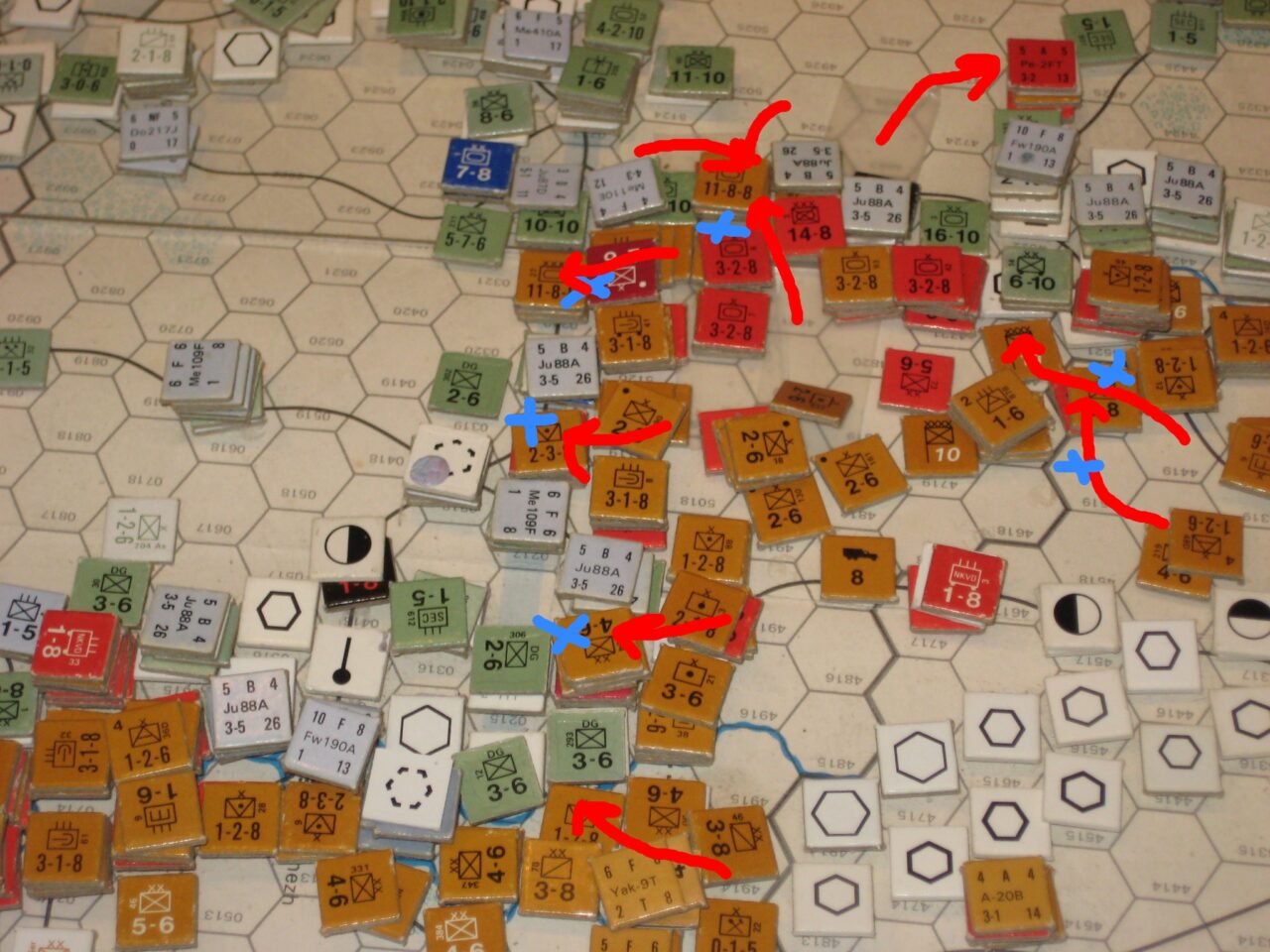 Along the Voronezh/Kursk road three attacks penetrate the line inflicting losses and retreats.

Voronezh Sector: The infantry/artillery drive continues south of the city and a second strong force advances West of the Don. 2 forts are eliminated.

Stalingrad Front; The soviets note the continual drain of units north but take no action. They are spread thinly in a defensive posture from the Sea of Azov to the end of the Major section of the Don with no offensive capacity.

Air Combat: The massive Moscow air operation is unopposed. The Soviets attempt to support the isolated Tank/Brigade formation outside Orel but two of the three Pe2FTs are driven off by interceptors although the VVS gains comfort by eliminating a Me410A’

Short and medium range Assault craft gain 2 rail hits in the Veliki Luki area and raid an Airbase Aborting a Ju87 on the ground.

The Long Range bomber force is less successful scoring only one rail hit in the Minsk area out of 10 missions there and against Polish and Lithuanian lines.