COUNTTER ATTACK! The German forces do what they know best utilising their mobility and concentrated firing power they carry out series of counterattacks to check the recent Soviet advances.

Finland and Army of Norway: The supported 3-8 mountain regiment which is west of the river adjacent to Murmansk decides it is too exposed and moves into the city contracting the perimeter to only three occupied hexes.

At Alta a fresh Mountain division broken down to supported regiments arrives with Res Points and moves towards the western end of the front line closest to the Swedish border.

AGN; Narva Sector: Units full back to Forested and Swampy terrain screening Tallinn and widening the perimeter as the right-hand flank moves to defend the river line at Tartu. The gap between these two forces is plugged by a 1010 mech xx

Pskov/Veliki Luki Sectors: Two Panzer divisions are transferred south to loop around the Soviet breakthrough by Strategic railing via Kharkov. Meanwhile weakened by weeks of battering and winkled out of their forts only terrain is now available to augment the defences’ Das Reich & Viking Corps therefore stay in the line adding the panzers to the defending forces.

AGC; North Moscow Sector; Just north of the city the unassailable Soviet drive is cut off at the base in a brilliant move which catches the Soviets completely by surprise, The Moscow city panzer defence force strikes directly north into the flanks of the Soviet advance while simultaneously from the west strong Panzer forces assembled from the Kalinin defence force and aided by part of the Moscow reserves attack the north flank.

South Moscow Sector: As expected the Axis forces crush the southern penetration using the balance of the Central Reserves. A 16-10 xx pz advances and stays in the line.

Orel Sector: A 13-10 pz XX loops around the westernmost units of the advancing Soviet units and Totenkopf Corp concentrates and strikes south from Oral. In the resulting combat a 12 8 Guards mech division is completely eliminated and the panzers advance south towards kursk. In this manoeuvre they are joined by the only German Mech unit south of the A/B weather line which has moved from Voronezh. In Exploitation a solid line of Mech and Panzer units isolate four Soviet tank corps west of the newly formed defensive line. 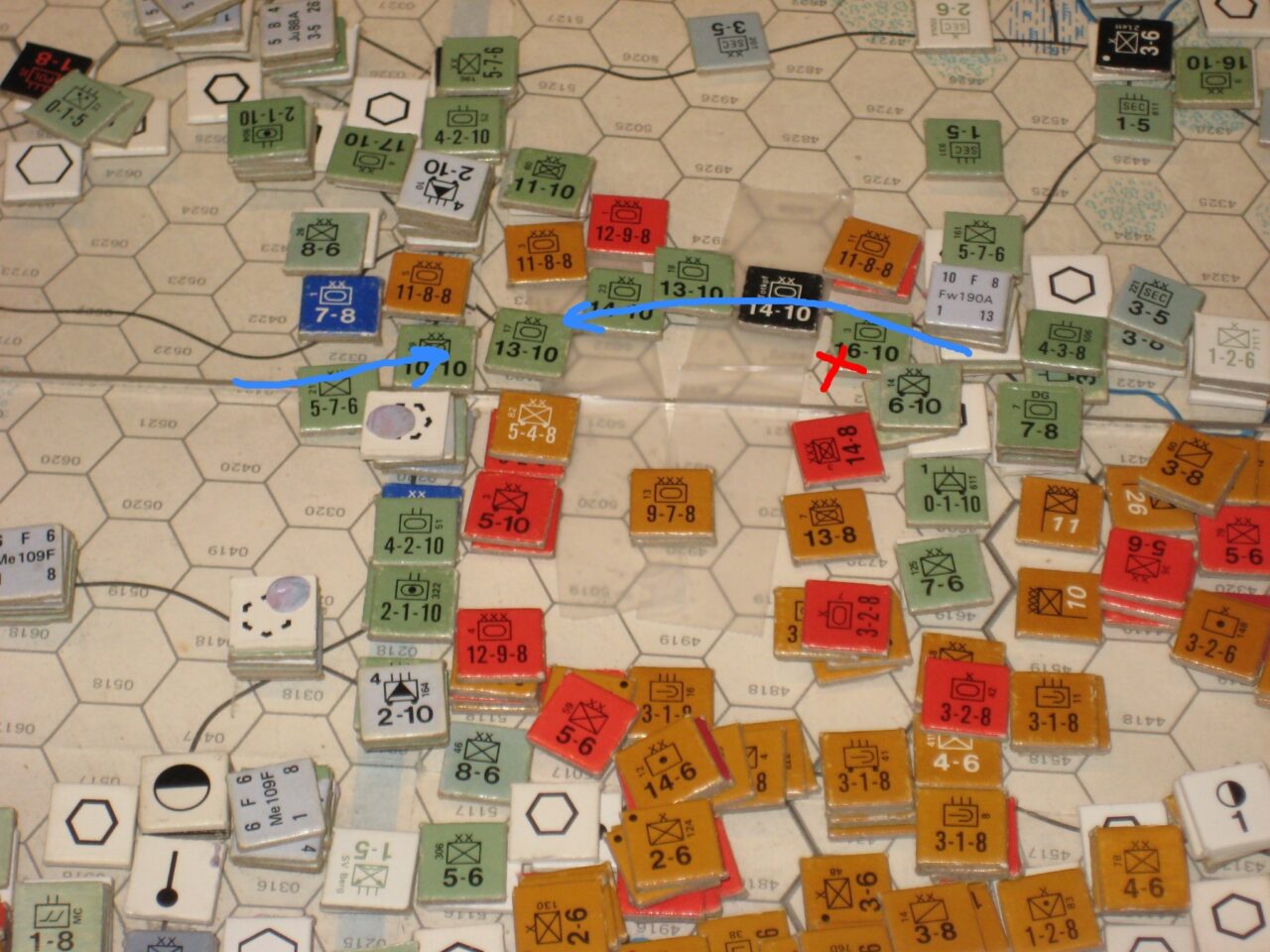 Counterstroke II: The Ais cuts off the tip of the Soviet assault

Southern Sector; Infantry and support units flee south trying to re-form the line together with units peeling off from the Voronezh defences. These units join the Security divisions along the Voronezh/Kursk rail line unsure at this stage where the Soviet intensions ultimately lie.

AGS: Only the Rumanian Tank division with an Italian Mot brigade and cadre are left as a mobile reserve in the south so the Axis units can do no more than contain the Soviet bridgehead over the upper Don.

Air Combat: A black day for the Luftwaffe; –  Most missions are DAS but Soviet air activity is intense and effective and in the worst week of exchanges in the war so far the Luftwaffe lose 6 air units for a single kill of a Soviet fighter. In other news west of Pskov a Harassment mission is Returned despite Fw escort which leaves a gap in the lines.