Hans Baur head of the Fliegerstaffel des Fuehrers pushes forward on the stick and drops the nose of the personal transport aircraft “Immelmann III” downwards. In so doing he sets off a chain of events that will seal his fate along with those of his passengers, family, Germany and the world. He does so out of respect for his precious cargo, none other than the Chancellor of Germany, the Fuhrer Adolf Hitler. Administrative duties now take up most of his time and he rarely flies the Fuhrer himself but occasionally, like today, he takes a trip to keep up his flying skills and credentials.

On first name terms Hans had been ferrying the Fuhrer and his entourage between various locations for over a decade now and he reckons he has got to know the Fuhrer’s moods. Today he is in a particularly dark one, troubled, no doubt, by reports from the Eastern front of Russian advances in Latvia and a breakthrough at Voronezh.

Hans reasons that a low-level flight over the picturesque countryside of Bavaria will lighten the man’s mood.

The Fuhrer’s personal secretary moves forward to speak to Hans about the deviation from the flight plan and ensure that the Chancellor will not be late for his meeting with the Hungarian ambassador later that evening. Just as he does so, two vials of frozen liquid of British manufacture, located in a briefcase in the hold, thaw; warmed by the Bavarian summer sun. They mingle and in so doing create a thermal reaction which ignites a larger mass of explosive compound in which they are embedded.

The resulting explosion engulfs the aircraft in a fireball which scatters fragments of the plane, its contents and occupants over a 10-kilometre radius of the Bavarian countryside.

Two days later Acting Fuhrer Martin Bormann receives the news that an examination of the charred remains of one of bodies has determined, from dental records, that it is indeed the mortal remains of this beloved Fuhrer.

After the confirmation of the Fuhrer’s death is announced there follows a chaotic period of reprisals and recriminations, at least one attempted coup and the settling of many old scores some tracing their history back to the start of the National Socialist movement.

The purge of middle and high-ranking civil officials and army officers that follows results in equal chaos in the field. Order and counter-order are confused and entangled as the various parties vie for the new leader’s favour or try to avoid his attention.  Whereas the new Chancellor does not share the same grand delusions of strategic military genius as his predecessor he needs and demands a victory to secure support irrespective of the feasibility or wisdom of such an operation.

As a result, the Eastern front in mid-August of 1943 is plunged into command paralysis and uncertainty resulting in a mishmash of moves and countermoves.

In Latvia Das Reich is offered no support and is forced to fight itself out of encirclement despite powerful friendly forces nearby. On the Kalinin front some units break and flee West while others stay to fight.  At Moscow the Moskauer Stadtpanzerverteidigungstruppe leves the city in order to attack a local breakthrough to the south but the odrers to return to the city (and certain anihilation) convieiently “fail to reach“ the Corps commander.

At the southern end of the active section of the Front, west of Voronezh however the demands for a victory result in desisive action

The Panzer forces in the Orel/Kursk sectors combine and hit the western flank of the Soviet armoured advance . Crashing into three Soviet Tank/Mech Corp and supporting arms they cadre one and completly eliminate two others by co-ordinated assaults and overuns. They press onwards linking with the Hungarians trapped 30 miles south of Voronezh

Despite this setback the Soviets are by no means a spent force and the world holds its breath as it waits to see who will emerge victorious from this clash of steel.

Army of Norway: The 6-8 mtn xx and a Res pt are evacuated leaving a 3-8 SS mtn cadre and some static AA as the only occupiers.

At the other end of the front a Soviet 1-8 ski is overrun by a light inf regiment.

AGN: The Axis receive orders to counterattack the Soviet Mech cops pinning 2 DR but these orders are countermanded and a 15-10 pz, 11-10 mech and SS Viking (14-10 pz) move over the Dvina to secure the route SW against any Soviet moves in that direction. A 5-7-6 inf however does advance to a forested hex to secure the flank of the surrounded divisions and cadres which are ordered to break out SE.

At Veliki Luki a newly arriving 16-10 pz from the Kalinin sector takes up position south of the city filling the fortified line together with the 14-10pz and 6-10 mot divisions trapped last turn. An 18-10pz from Kalinin moves into reserve at Veliki Luki.

At Kalinin some local commanders, in the absence of orders from Berlin, take matters into their own hands and begin to pull back to the fortified line built 100 miles in their rear. Some units though stay behind.

AGC: The corps commander of the Moscow forces, unnerved by the constant bombardment form Soviet rockets and artillery, the threats of breakthrough to the north and south and the constant harassment from the air decides to evacuate the city. One pz XX moves to Rhzev for refit while two others use the excuse of a counterattack against the 14-8 Guards Mech advance south of the city to leave and not return. In doing so the fate of the remaining troops in the city is sealed. 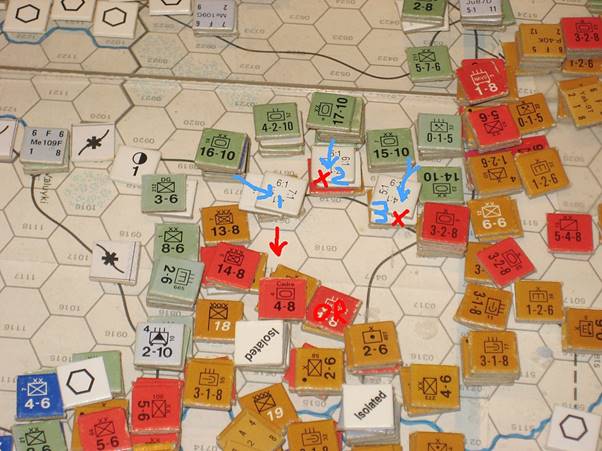 From there to Kursk the line is quiet with the mobile forces moving East just south of the weather line to strike at the Soviet advance West of Voronezh. The Soviets here were lured by the thrill of an overrun spree last move and have exposed themselves to attack in turn.

Single stacked in open country they present an ideal target for an armoured counterstroke and play right into the Axis hands. In a well-co-ordinated series of three 5:1(-1) attacks the Axis strike and after the dust clears from the dry Steppe the hulks of two Soviet tank corps, a 3-2-8 Guards tank brigade, 4-1-10 mot rkt reg, 3-8 mech brigade and 1-8 NKVD brigade lie in ruins. Not content with this victory, great in itself, the panzers press on overrunning the surviving cadre of one of the attacks and connecting with the Hungarian fort south of Voronezh. This move was ordered in an attempt to maintain the increasingly shaky support of Hungary who before the attack had no un-isolated ground forces left in Russia.

AGS: The mainly Rumanian/Italian sector in the Don bend prepares to move West and evacuates the extreme Eastern tip of the river. They formulate a plan to stage a phased withdrawal to the Donets river. This river is not currently fortified and will be a less secure position than the fortified “Stalino line” further West but has the advantage that it will allow Rostov to be maintained. Indeed it will be less secure than their current location but the Axis forces are increasingly concerned about the great imbalance in the Northern and Southern sectors of the front the latter of which is 100s of miles further East. It is also in danger of being split off from the rest of the front and isolated by a serious Soviet move SW from their current location at Voronezh. 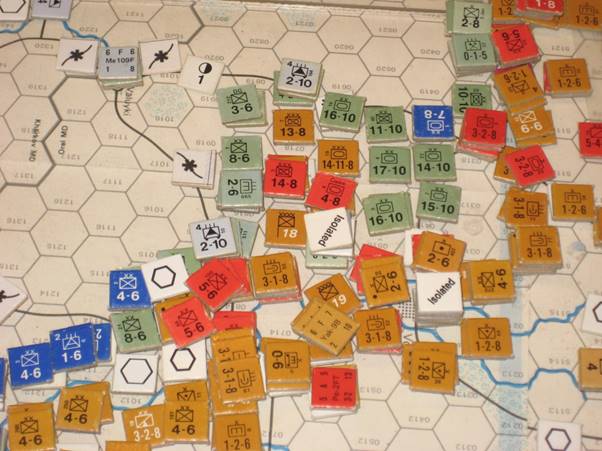 The Axis attempts sealing of the Soviet breach at Voroneszh

Air Combat: Nothing significant. The Luftwaffe suffers one lost air frame on a DAS mission and the Soviets two interceptors.