Breakout and Pursuit – In Estonia Soviet troops pursue the Axis forces to the Dvina line surrounding and eliminating the stragglers with overwhelming force. They contact the temporary Axis mobile defence line West of Veliki Luki and penetrate the line with an attack on a Panzer unit and push through. Exploiting from the West Soviet mobile units move through a gap in the Axis line and together these two arms catch the bulk of the German mechanised forces north of the river putting them out of supply.

In the south the Axis line is again demolished a few miles West of Voronezh where Soviet tanks exploit SW and overrun numerous regiments and a Security division. The exploiting units also move to connect with the infantry army pressing West out of the bridgehead on the West bank of the Upper Don and surround and isolate Voronezh and a nearby fort. 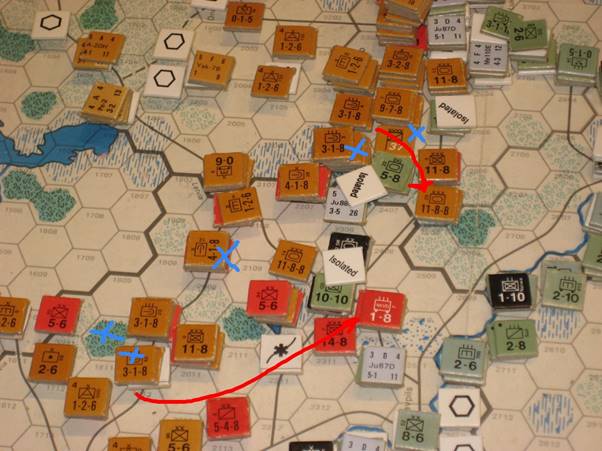 Partisans: To support the renewed offensive partisan activity is stepped up and 7 hits are achieved against rail lines.

Finnish front. At Murmank the Soviets take the offering of the single mountain cadre remaining outside the city and eliminate it. Only the city itself now remains in Axis hands east of the estuary.

In the West fresh infantry divisions laden with attack supply move up the road from the south to deploy towards Kautokeino.

Leningrad Front: Estonia: With only one ZOC the infantry division and cadres straggling back to the Dvina are surrounded and eliminated. From the Baltic coast west, the Soviets form a line just short of the Dvina at the limit of their movement range. In the West of this sector they move artillery divisions into place against the Veliki Luki fortified hub but do not attack. Their focus is on the Axis line set forward of the river. Designed to protect an infantry division and cadre moving south the Axis are confident the Soviets will avoid direct combat against their powerful defences. The Soviet tankers have other ideas. 3 Tank Armies combine their best units and attack a 12-10 pz cadering it. The advance pins a 14-10 pz, 6-10 mot stack to the East of the breach isolating it and the attackers have enough strength in the advancing stack to overrun the retreated cadre in exploitation. But here lady luck favours the Axis. The Infantry division which indirectly had offered up the panzer target now redeems itself. The division is attacked but only a retreat results. The unit is cadred due to ZOCs but ends its retreat on top of the Panzer cadre, thus denying the Soviets their prize! Such are the Fortunes of War.

Nevertheless, the resulting hole in the Axis line allows a further hex of exploitation. The Soviets swing in behind the German line and additional mobile units rush in from the West between the Dvina and the German panzers. In the resulting pocket they isolate (by ZOC) 2DR SS pz xx, 10-10 pz Gren xx, 5-10 SS pz gren, 6-8 pz cadre, 3-6, 2-6 inf cadres, 4-2-10 tk reg, 2x 1-10 mot ATs. The move caries some risk of a counterattack but most of the German units will be out of supply and Viking is out of position at Riga There is only a single 15-10 pz xx available outside the pocket to mount any counterattack so the risk is considered acceptable.

In a separate operation the Tallinn pocket is eliminated.

Kalinin Sector: The advance at the extreme NE tip of the German front continues to gain a hex a turn but a move south against the rail line east of Veliki Luki fails to make progress.

Moscow Front: With Artillery and Rocket Divisions now emplaced the Soviets again attack Moscow and again fail to make any progress due to the beefed-up defence which nullifies the Artillery point gain.

South of the city however cracks begin to show in the Axis line and with the bulk of the German armour engaged in the Orel/Kursk sector the Soviets are emboldened to advance and in one case exploit with a 12-8 Mech corps isolating a 7-6, 3-6 infantry fortified infantry stack. Kaluga is liberated.

Orel/Kursk Sector: Orel is assaulted and taken together with an adjacent fort.

In front of Kursk the advance is stopped dead by the German counterattack and units form a double defensive line. 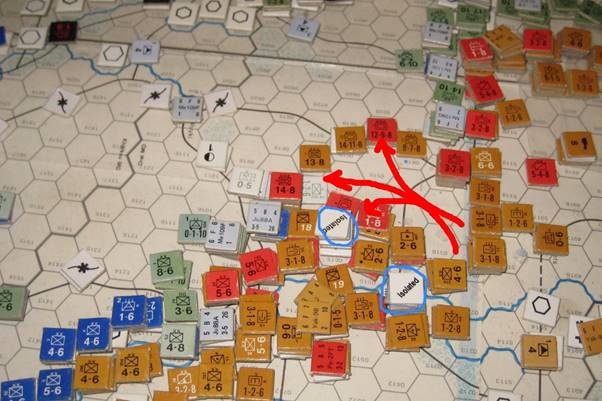 The Soviet Breakthrough at Voroneszh

Voronezh/Kursk Rail line:  West of the city of Voronezh the mixed Axis line is assaulted on 4 adjacent hexes all of which succeed in eliminating the defenders. Retreating cadres, security units and reinforcements in transit are all crushed in a series of exploitation over-runs. (Total Over-run haul is 1×3-5 sec xx, 1-5 sec reg, 1-8 Pol, 3-6 inf cadre, 0-1-5 eng, 1-6 Hung eng, 1-8 it cadre,.). The Soviet tanks form a defensive ring which extends to the Infantry Army advancing south of Voronezh moving West from its bridgehead over the Upper Don. This cuts off Voronezh and a nearby fort which together trap the bulk of the Hungarian army. These units will not return to active service when replaced until released so this is a great bonus.

Stalingrad Front: As the threat of any serious Axis armoured assault in the south recedes AT units are stripped from the front line and move north.

Air Combat: The Soviets employ air combat for 4 attacks this turn to nudge up the odd; the most for some time. Their preponderance of airpower and the dispersed nature of German Fighters in any one area allows the VVS to calculate quite accurately the number of aircraft needed even assuming maximum loss from interception. Only AA fire is less predictable but where present they add extra bombers to make the contribution from air power a near certainty.

An example of one such attack is against Moscow where German fighters decide to engage. 2 FW180s attempt to bypass the 6 strong fighter escort. One is aborted and the other Misses its target! 10AA factors obtain 2Aborts and 3 Returns but the 5 survivors of the 10 strong flight of Stormaviks, are sufficient to reach the required odds.