After the collapse in Aragon the Republic have been shoring up the defences in front of Barcelona north of the Ebro. They have the Segre and Elbro to fall back on and some are counselling that they should do so now well ahead of a new Nationalist offensive. This would allow them to build up strong doubled positions far more secure than the flimsy fortifications and defences on the current front line. Furthermore it will prevent any flanking attack from the West via the Valencia/Barcelona road to trap units  in such a forward position. The counter argument is that the Nationalists will always be able to force a passage and a voluntary withdrawal giving them some 50 miles of territory is a price too high. The Republic have some 18000 tons of supplies arriving via France for the defences and time to build up due to Franco’s ill-judged diversion of momentum  from this front to Valencia. Conscription is extended and three fresh divisions are raised and preparing to take the field ranging from 16 year olds which the veterans call quintadel biberon (the babies bottle) to middle-aged fathers, Nationalist prisons of war and technicians were added to help in the factories, however due to the lack of rifles, not enough to go around, such measures were more effective as weapons of propaganda than substance The newly arriving material was more suited to aviation, special arms and machine gun manufacture the small arms doing no more than replacing those lost in the long retreat from the north and on the Mercian front.

Weather;   Unchanged except for light squalls in the Med. (Rough). D=M. E=C , A= R, M= R
Supply:. Once again the Anarchist find their position at the far end of the line from their supply source to be a bad decision as they are cut off from their primary supply source and all become U1 because Barcelona is blockaded preventing the Naval supply element. .
Pacification; Gijon, Almeria
Movement: 1 Res pt spent to temporarily increase Rail Cap to 24.75 REs
Replacements: 1.5 SRPs, 0.5 (KL) SRPs recovered
CR.32Bis, HE111B replaced, 2-6 eng,  replaced.

The Nationalists resist the temptation to attack on the Zaragoza affront and continue to stock pile supplies and move attack formations into position ready for a massive offensive when the weather clears. 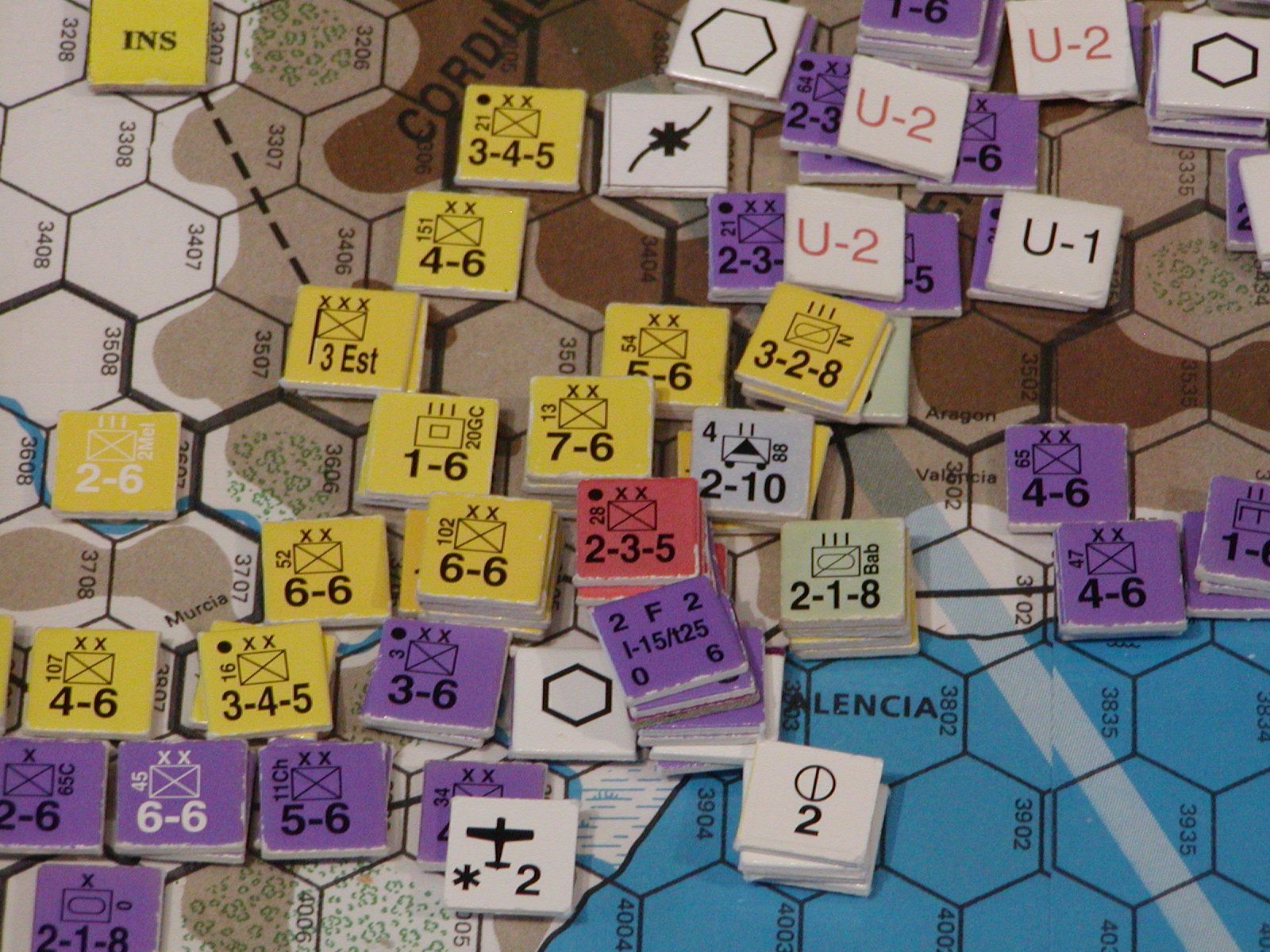 Sortie1: SB-2Bis out of Barcelona on Naval Patrol.

Movement. Sensing the end is near in Murcia republic forces move towards Valencia to mass for a link up with forces moving from Barcelona. The government is Alicante slips out by night to set up  the government in  Barcelona (3624)