The Nationalists face a dilemma at this point. The elimination of an entire stack of Catalan defenders produces a potential weakness that must be exploited to the full. The previous attack NW of Zaragoza had severed the Republican lines with the majority of the strike force including all the International Divisions plus most of the 4-6 Pa divisions U1 in the Pamplona area.

The Republic felt secure that their 13 point defensive line would hold and determined themselves to maintain their encirclement of Pamplona. The loss of this city to the National cause would be a great propaganda coup and may lead to the relief of San Sebastian. They did not therefore move troops south last turn.  The Nationalist having created a hole (and cursing the fact that their exploitation troops were still locked in combat with the Basques) need to isolate the point of weakness as best as possible. Their dream would be to slice directly East out of Catalayud to the Pyrenees thus trapping and isolating/destroying the cream of the Republic and possibly winning the war.  Their dilemma is how best to inhibit the ability of the Republican forces to escape. The initial one might say obvious method, would be to plaster the route south to slow any Republican forces in the North moving south. However most are ZOCed and have the Aragon River to cross which limits them to a one hex move south anyway.

The other forces North of Zaragoza will be needed to hold the line and route south anyway so are unlikely to want to move too much south knowing that any that do move would further weaken the defence and could allow a second attack against this long exposed flank.

No the best solution , the Nationalist leader decide is to blanket the area to the  West of Saragossa.

As luck would have it (for the Republic) they had attempted an attack from this area last turn so have some reserves in the area. It is these the Republic wants to inhibit and so it is here that the more significant harassment is targeted. Unfortunately all the air force is one factor short of ideal coverage which would allow only adjacent forces  to move into Zaragoza. Nevertheless with the current coverage only one 3-6 and one 2-3-5 can enter from the south adding to any directly adjacent forces which are limited. The mission is helped by the fact that there is only a narrow clear corridor North/South up the valley to Pamplona which limits the ability of the Republic forces to skirt around the harassment hits. All wait to see how the drama will unfold and if any significant gains can be made by the Nationalists before the autumn mud slows/stops operations. 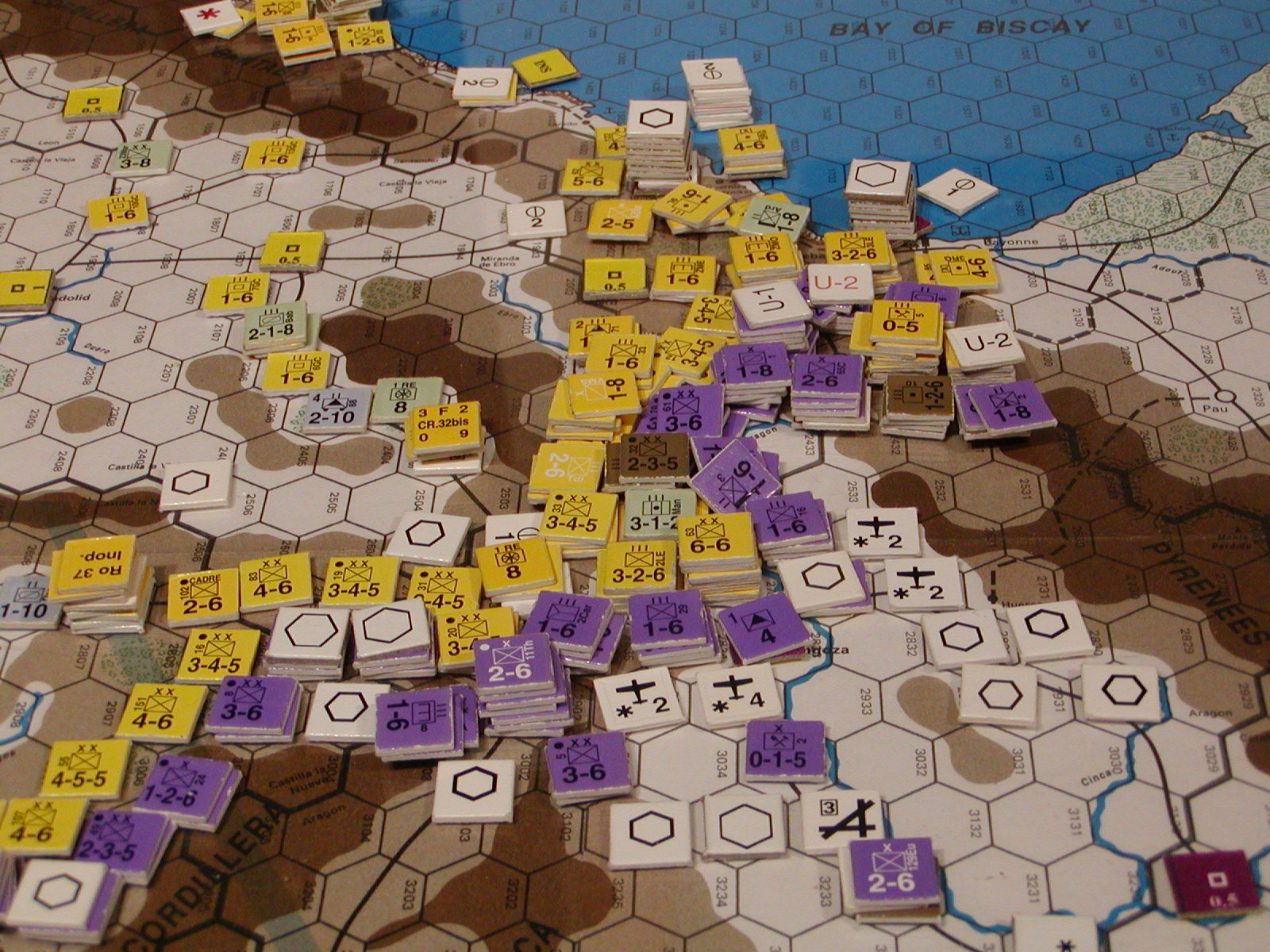 Initial Phase Air Activity; Nationalist launch massive Harassment operation in Initial Phase and inflict 2 hits each on 2632, 2935, 3034 and a 4 Hits at 2934 (Around Zaragoza).

Sortie 4 & 5; Airfield at 2707. 2X SB-2.  5pts AA fire ineffective but the withering fire throws off the bomb aimers and all bombs miss target.