Partisans:  News from the front and the approaching tide of their regular combat troops spurs the partisan bridges to new heights and 8 rail cuts are achieved this turn.

Finnish Front/Norway: A 4-6xx div turns the flank NE of Kautokeino and moves towards the coast with a view to stopping landward reinforcements from the troops evacuating the Kirkenes pocket. At the pocket an air assisted attack only results in a retreat against a German Mtn regiment. The Soviet attacker’s problem will soon be a paupercy of supplies as these need to be carted hundreds of miles across the tundra and there are few en-route.

Leningrad Front: Much to the Axis disappointment their foray north of the Dvina has been met with distain rather than alarm by STAVKA who only dispatches a single Tank Corps with Mot Rkt support to aid the defenders north of Dougavpils. The troops in situ are ordered to hold position to constrict the enemy advance with troops in transit and a few scattered reserves move in to surround the aggressors. Is this distain warranted or are the Soviets underestimating the Axis forces? With an airdrop planned and more panzer and panzer grenadier reinforcements in transit from Germany and elsewhere only time will tell.

Further east the slow, steady grind at Vitebsk continues with a bridgehead established over the Dvina west of the city.

Mixed forces continue to chew away at the Axis line north of Smolensk and a cadre stack including a 6-8 Pz is surrounded and isolated in exploitation.

Moscow Front: The hastily formed fortified line between Smolensk and Bryansk is mainly of earth and timber, there is little if any concrete in the construction and many sectors lack effective overhead cover. It is manned by cadres, regiments and only a few second-rate divisions, security units etc.  Despite a seasoning of Panzer brigades and Panzer cadres the belief of OKW that this can stem the Soviet advance is shown to be as flimsy as the earthernwork of which the line is constructed. A wave of tanks, rockets and large artillery pieces move to the line and crash over it washing away the earthworks and its occupants as easily as a spring tide might wash away a child’s castle of sand on a beach. The line is pierced in several places and in exploitation Guards and regular army tank and mech corps overrun a second line of engineers and emplacements. In addition, a tank corps hooks north and isolates two 16-10 Panzers. The only crumb of comfort is that a single stack of units comprising a 4-6-6 inf, 2-6 eng, 2-10 AA, 2-1-10 Stug and 4-2-10 pz II refuse to withdraw despite a full-strength panzer unit on their left flank falling back after losing almost half its strength.  These units form a breakwater splitting the Soviet tide and limiting its advance. Without this steadfast defence a 50-mile gap would have allowed the Soviets to advance well into the rear of the defenders and compromised the whole defensive line at this point. 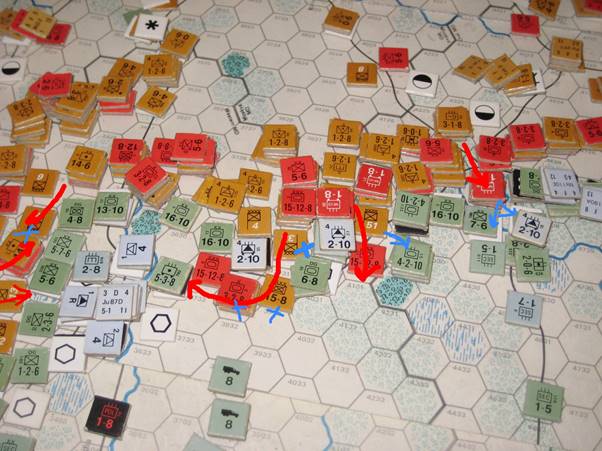 Even with this noble sacrifice (for it is difficult to see the infantry components of this stack surviving much longer) the position is grim for the Axis in this sector and the raison d’etre of the strongpoint at Smolensk is now in doubt.

In the south of the sector a set piece assault against Bryansk itself secures the city establishing a bridgehead over the river and splitting the Axis fortified line again. In exploitation a NKVD political unit moves into the city to ensure a no-retreat order is implemented.

Stalingrad Front: With the leading edge of the Soviet advance still out of supply in places and a large sector along the Donnets running short of ammunition and general goods the guns fall silent. Only a single ineffective attack south of the B/C weather-line is executed.

Air Combat: The Soviets easily replace the aircraft caught on the ground by the 563rd from their vast reserves but are experiencing a relative shortage of mid-range assault bombers therefore attacks are limited to a few top-up GS missions. The Leningrad LRBF range over the German held Baltic states and former Polish territory to try to damage rail connections to Dougavpills. In the 6 raids two aircraft are eliminated, and two rail hits obtained. Lucky defensive fire by an IL-4 aborts a Fw190.