Slick trick, or daring exploit? I hesitated to resolve the opportunity offered the 563rd AT battalion reported in the AGC section below. I am not a great fan of slick tricks which seek to exploit a rule or system weakness. After some internal debate though I decided to allow the 563rd its moment of glory. The Soviets had consciously left the “hole” as the line was stretched between two slightly divergent thrusts. They had calculated that no unit could penetrate in the mud but had not considered the effects of a weather change. The Axis could have pushed more units through with a wide sweep of “ants” but I deliberately limited the move to one unit. I reasoned that the Soviets to some degree “deserved” this but also considered that although no one action like this was likely or possible it could be said to represent an amalgam of many such low-level raids which will have occurred over the last 2 ½ years. Anyway Kelly’s Heroes is a great film and while it is not reported whether or not the 563rd found any gold bullion or had a marching band in support their advance is equally both as heroic and improbable so they are in good company.

Army of Norway: The loss of the port of Kirkenes forces the survivors of the Petsamo sector to pull out along the road SW. Meanwhile in the wastes to the east of Kautokeino the line is stretched to stop the Soviet envelopment of the left flank which could, if unchecked, threaten the withdrawal of the troops along the coast.

AGN: The Frost-hardened ground allows the Panzers to roll again. The predominantly German forces of AGN decide to launch a mini offensive north out of the Dougavpills bridgehead; an enclave north of the Dvina which the Soviets were in the process of fortifying their line against.

The panzers and panzer-grenadiers concentrate and attack in strength catching the defenders completely by surprise. They eliminate one stack and breakout into the rear. Second wave units in the follow up advance and exploitation overrun engineers and Res Pt stockpiles. They aim to strike North to Pskov in an attempt to split off the western end of the Soviet line and release pressure from Riga which has been under bombardment for 6 weeks. To support these endeavours an airdrop is planned to take Tartu in December. 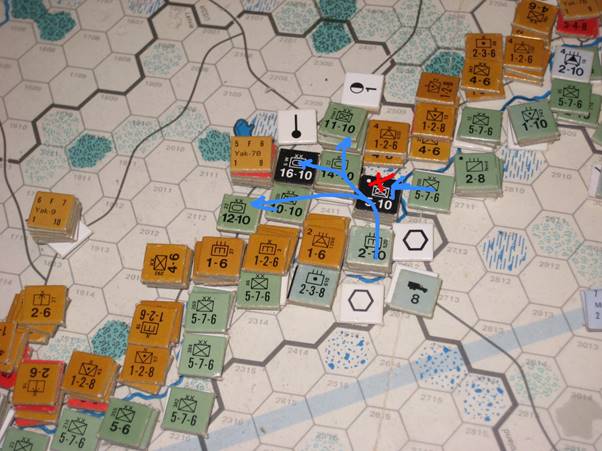 Action over the Dvina

Further East along the Moscow road an 11-8 Tank is cadred.

AGC:  Spoiling attacks continue along the line as opportunities present themselves but lacking anystrategic direction results are mixed with two retreats and one elimination resulting.

The March of the 563rd: In one of the most dashing exploits of the war, penetrating a weakness at the junction between two army groups, a lone AT battalion finds itself behind the enemy lines just north of Kursk. Soviet over confidence in their advance and a scrabble for glory to maximise the front line force for attacks has led to a complete and negligent failure to provide any rear security.  The advance and exploitation catch the Soviets completely unaware. Many aircrew cheer the 563rd as it races onto the airstrips before overrunning AA batteries and aircraft. Few manage to scramble to safety so compete is the surprise. Not until a Guards infantry unit halts the German battalion is the carnage ended. In all 5 Airfields and 4 Res Pts are overrun and 3 Pos AA units, and 10 aircraft lie in ruins. 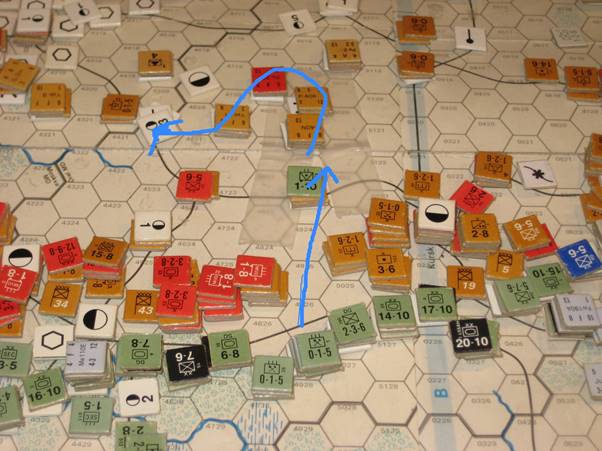 AGS: NE of Kharkov a stack of overextended Soviet advance units at U2 is attacked and eliminated.

Air Combat: Limited encounters result in no air losses this turn except those caught on the ground.