“Yuri, pass me some of that gut rot you call vodka.”   “Hey!! who’s calling my vodka gut rot it’s made from the finest potatoes peelings money can buy! I made it myself only last week!”   “Yes but it stinks and tastes of the tank fuel you boiled it up with!”

“Don’t worry my friend, a fascist bullet will get you long before my vodka will.”

“That’s what I like about you Yuri, always the optimist!”.

“Boys – keep your voices down, The fascists don’t know we are here yet. Keep quiet and keep moving”.

“Don’t worry serge Yuri whispered back, almost there and those pampered fools are too fond of their comfort to be out on a night like this; Still holed up in their bunkers I wouldn’t wonder”.

Yuri and his vodka swilling comrade moved further forward. Damp cold and hungry they slid rather than crawled down the ditch that the rain has turned into a small torrent.

Only the sergeant at the rear occasionally ventured to peep up over the ravine sides to ensure they remained unspotted. “Faster, daybreak is only three hours away.” He urged.

Their target was a small mound a few thousand yards ahead barely perceptible above the plain. The Germans had ignored the slight rise concentrating instead on the main defile which lead straight from the airfield perimeter toward the rapidly approaching Russian line.

Yuri and his comrades were the advance party of a company which had been ordered forward to infiltrate enemy lines and occupy the high ground. There they would wait until their strength had built and they could engage the enemy from his vulnerable flank.

Just before daylight the operation was complete.  Yuri and his comrades had occupied the slight mound and dug in. They camouflaged themselves behind the light scrub and the small ravines that coursed down from the centre and they had welcomed a light mortar squad into their ranks.

Seemingly oblivious to the cold and damp they waited.

At daybreak the sergeant, looking out through his binoculars, confirmed their infiltration had gone like clockwork. The German flack unit and the shattered German division which had moved back onto the airfield three days earlier were completely oblivious to their presence on the flank.

Two hours later the whistles blew, and they rose from their hiding places – “Here goes Yuri! Now we will see if a fascist’s bullet is deadlier than your vodka!!

Partisans:
Inflict 5 more rail hits this turn; some close to the front lines which together with strategic rail bombing has caused delays and frustration for the German quartermaster and transport corps and is holding vital reinforcements from reaching the defenders north of Moscow.

In Southern Finland it is a different story as the front explodes shattering the former Finnish main front line.  Advance Soviet armoured elements penetrate the line and trap two infantry divisions struggling through the mud to reach safety further west. One is smashed to a cadre the second, surrounded, is forced into a complete surrender. The Soviets now seem unstoppable on this front and the Finns urgently petition Berlin for more assistance. 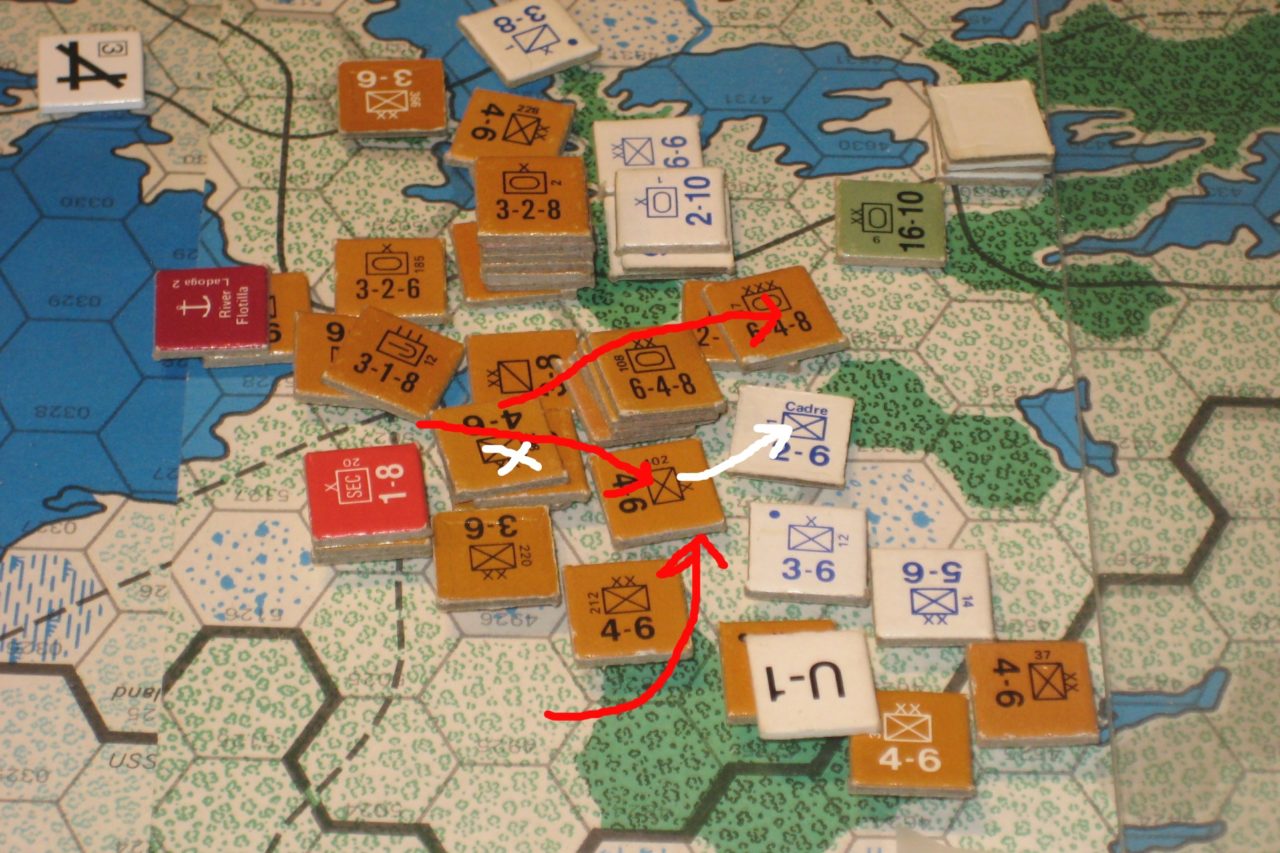 Leningrad/North Moscow Front
The German occupation of a second Leningrad/Vologda rail hex is a blow lessening the chance of a Soviet re-occupation of the line. They fear the 50 miles of unsupplied front could develop from a sore to a festering wound as happened at Kalinin last year. Units are tasked to move towards the sector to bolster the front but few are free to take up position in force and although they hope to have sufficient strength to resist further gains by the out of supply attackers they do not have enough strength to mount any sort of a counter attack.

On the main front units move to a defensive posture and brace for the inevitable German continuation of their main drive.

Army of Moscow
A new army group is designated under Timoshenko as the advance over the upper Volga continues. Unfortunately the initial hope of a drive into the undefended plains between Moscow and Kalinin is frustrated by the changed weather conditions. That same weather which stopped the German response to the attack now serves to prevent  the Soviet Tank corps from inflicting great damage on the mainly infantry defenders. Likewise the reduced mobility restricts the advance to 2 hexes. Nevertheless another fort and infantry division succumbs.

Voronezh Front
STAVKA realise a drive north from Tula at this point would put pressure on the German defenders and threaten Moscow but they simply do not have any spare offensive capability.

In time Infantry and AT units can replace the Tank corps defending against the main enemy drive to Vologda but currently the tanks need to remain to bolster the defence in this critical sector. For the moment, therefore, this Front remains quiet.

Rostov Front
The smashed force West of the Don flees back East but the single Mech division struggles to escape encirclement and reach safety. Doctrine prevents the unit retreating in the exploitation phase and its fate appears sealed. 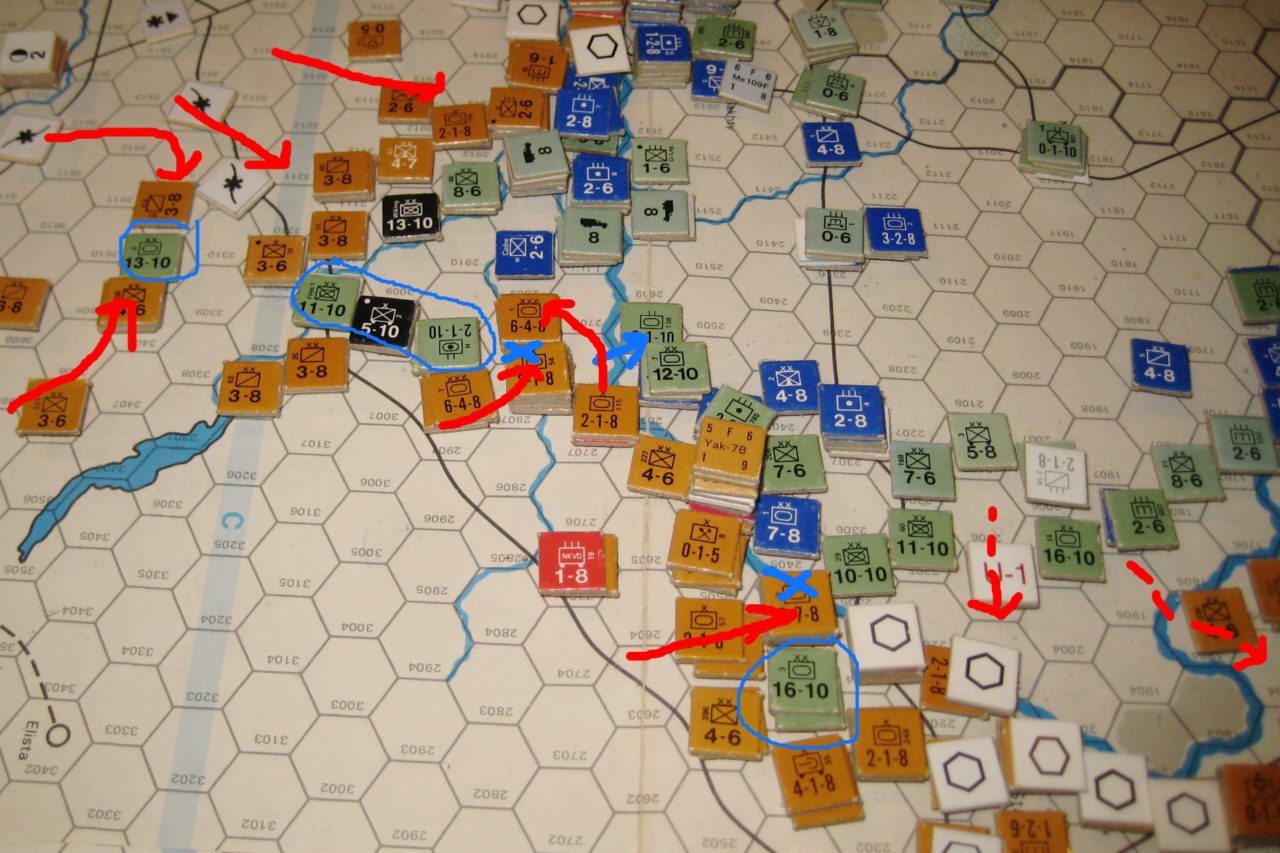 On the East bank however the Soviets counter attack with vigour. They eliminate the German bridgehead close to Stalingrad and trap once again the 3rd Panzer xx (16-10). Further south they drive into the weak German screen between the small lake system and the river Don and eliminate two Rumanian divisions pushing through and ZOCing 3 more Axis stacks. Units moving north from the Caucuses reach the Axis lines in force and clamp tight against the shrinking bridgehead immediately east of Rostov.

At Stalino the two surviving Guards cadres gain some reinforcement by organising other stragglers and survivors from the rubble of the shattered city into the equivalent of an infantry regiment. They brace themselves for the next, and final, attack.

Air War
In the north there is considerably more activity this turn as the Soviets send long range bombers against the rail net and try to eliminate Axis dive bombers and fighters by launching attacks against Moscow and Kalinin air bases. This new higher level of engagement is facilitated by an earlier period of airfield construction which places a large fighter and short range bomber force within striking distance of the front lines and enemy air bases.

To their great shock the Soviets encounter the German FW 190 fighter which eliminates and aborts two of the three squadrons sent to engage them without loss.

In the south activity is more muted due to few air bases and the bulk of the force transferring north to try and wrestle local air superiority from the Luftwaffe.