The door swings both ways. Displaying a finesse of strategic slanning and a flexibly hitherto unknown the Soviet Army of Moscow under Timoshenko faced with the German wall of steel in the West takes advantage of the freeze and rotates through 90 degrees. The Army launches a well-supported attack immediately to the east of the small lake cluster north of Moscow. Massed Tanks, and Guards infantry fords the upper Volga and drives north head on into the fortified German line. Waves of IIyushins fill the skies battering the German forts. Joined by a sustained rocket attack from the south banks the defences crumble and the stunned and much reduced defenders fall back. Soviet Tank Corps enter the breach and with motorised rocket artillery in support ride over the shattered survivors. Engineers and a lone artillery regiment in transit west are also crushed under the wide tracks of the T34s.

Follow up forces pass through with lead elements reaching to within 10 miles of the Valogda/Veliki Luki rail line with others overrunning the southern tip of the large German airbase cluster straddling the rail line. They catch a ME109 squadron on the ground; few aircraft escape. A further drive reaches the outskirts of Kalinin trapping a low grade German infantry division in the bend of the adjacent oxbow lake. Second echelon guards mech corp support the operation occupying the NW bank of the river and protecting the right flank.

The pattern of attacks and destruction is repeated all along the northern line of the German bulge and numerous breaches are made.

It appears Hans’ optimism was misplaced.

Partisans:  To Support the regular army’s activities partisans launch a series of raids achieving an impressive 6 rail hits. They also score an airbase hit which had been vacated as support troops rushed forward to shore up the Moscow defence line. They aborting a ME110 on the ground in the process.

Finnish Front: Soviet Arctic Command continues to drive out along the northernmost E/W rail line. Circumventing a German 6-8 mtn they eliminate a Finish bdr guard and German rocket unit to the north and push west parallel to the rail line. 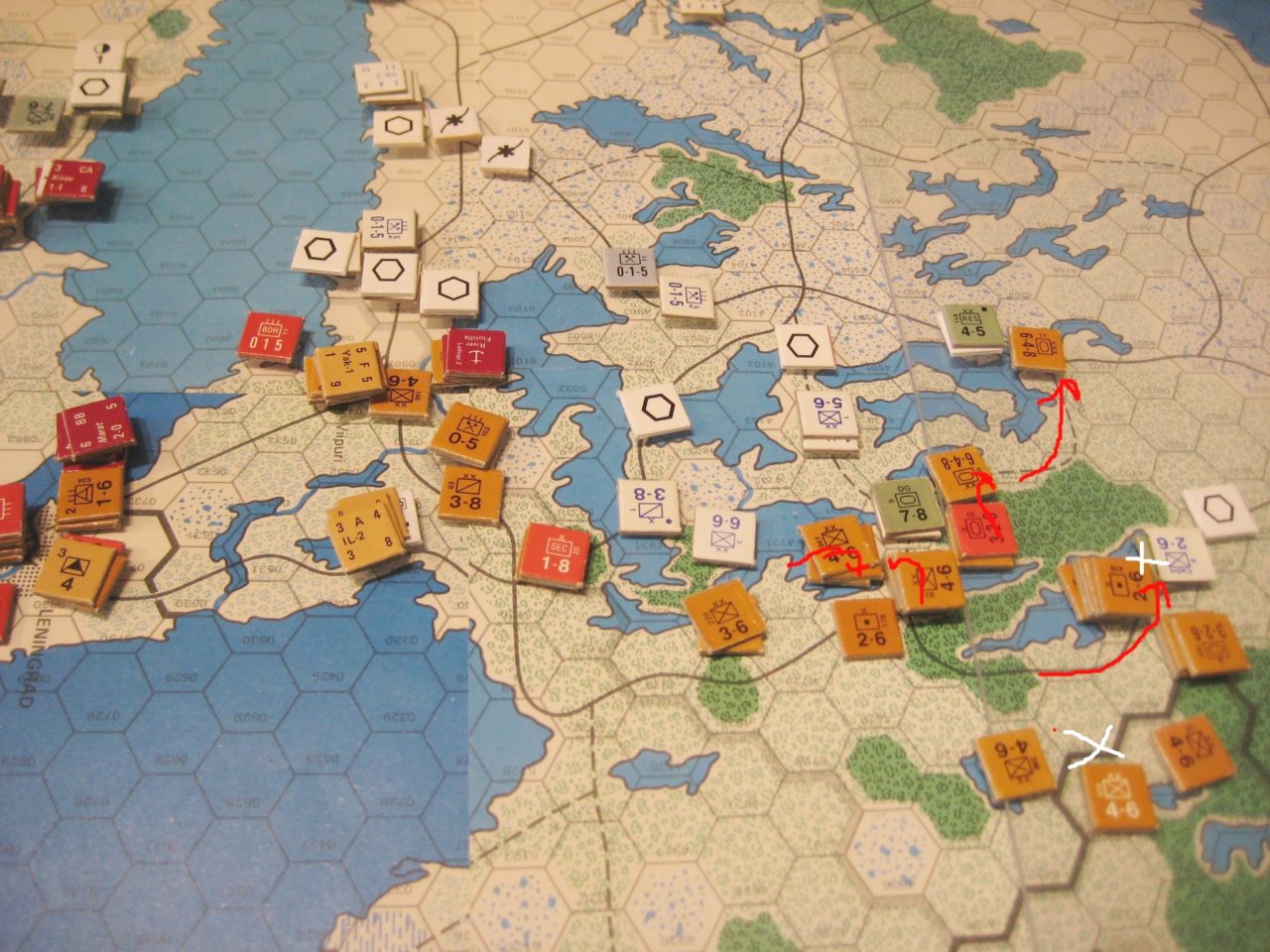 The 9th Panzer cadre continues to deny the Soviets the breakout they are looking for holding firm against another determined attack on its position at the northern end of the central lakes system. However Soviet motorized units infiltrate the lines seeking the more open terrain of the interior and occupy Kupio overrunning a 0-8 flack unit and eliminating a MS406 on the ground which fails to escape. Meanwhile a surrounded Finnish Inf XX cadre stranded in the woods to the east succumbs to an automatic kill as the main drive cadres another Finnish 5-6 inf XX.

The newly arrived 9-6 Artillery XX adds its firepower to a direct attack south towards the vital crossroads and winkles the German defenders out of a fortified wooded hex. The defenders fall back in good order.

To the east of the NS rail a a risky low odds mixed attack strikes directly East in a bid to trap a large group of infantry struggling south from their previous position astride the Leningrad/Vologda rail line abandoned a month ago. The attack succeeds is driving back the defenders and the advance narrows the gap through which the retreating infantry need to pass to safety. Another attack further east along the line make similar headway.

The mass of Soviet armour defending the objective of Meatgrinder are re-tasked for offensive operations and take on a 12-10 panzer at the NE tip of the contracting German leading edge. They cadre the panzer. 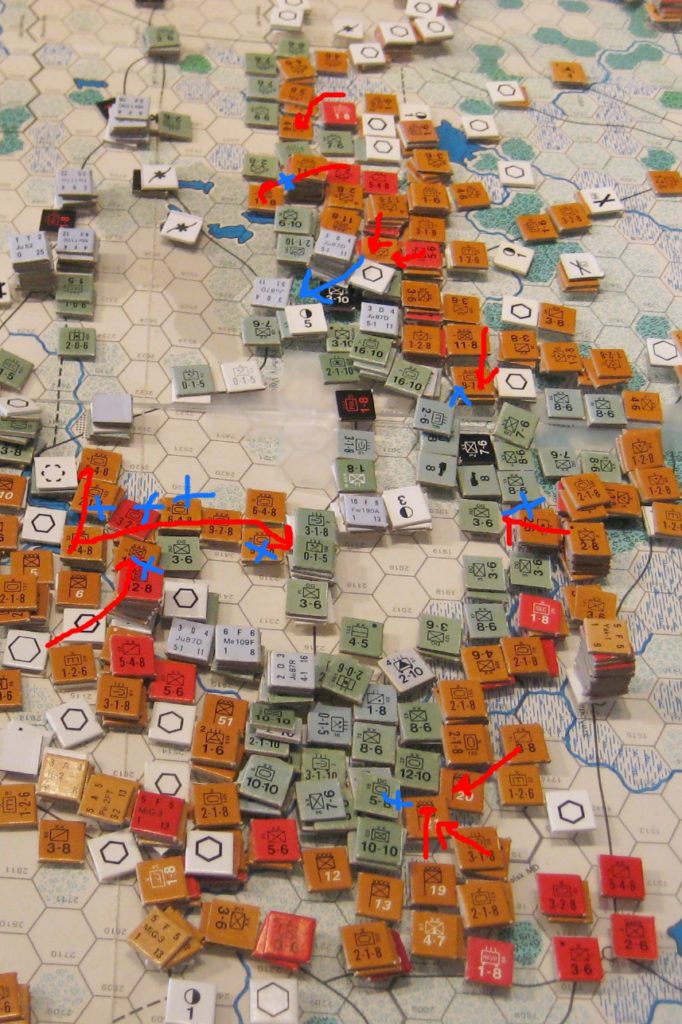 Moscow Front: The preamble above covers this attack which has placed the leading edge of the German bulge in the east out of supply. If the Soviets are able to link with their comrades pushing south this will isolate around 30% of all German mobile forces on the Eastern front

Voronezh Front: Nothing to report.

Stalingrad Front: Soviet forces press the German defenders still south of the Don but there are no attack opportunities.

Engineers continue to rebuild the shattered infra-structure of the region. Some armour corps move north but the Soviets retain a mobile reserve as a contingency against any renewed Axis aggression.

Air War:  Southern Finland is subject to some rail bombing raids to impede Reinforcements reaching the front and to prepare the way for a planned attack along the south coast in the spring.

On the main front some deep raids are made but these are ineffective as the long range force has been whittled down over the year.

German fighter squadrons rise in force to engage the GS supporting the attacks over the Upper Volga but suffer another defeat. 8 interceptors by pass the escorts but outnumbered over 2:1 two are returned by the escorts. When the fighters engage the bombing force a 109 and 110 are eliminated for the return of a single Lend Lease A20 and the GS is sufficient to keep the odds favourable.