Weather:  Snow spreads south from A to B in the south Rain and Mud persists.

Finland & The Army of Norway: Murmansk front no activity.

In the centre the Axis straighten the line but do not attack.

In the south the 9th pz cadre holds position to allow Finish forces further south pull back west as the threat of encirclement from infiltrating Soviet troops grows.

AGN: (Leningrad sector) OKW has determined that despite the rapid Soviet advance further south from the direction of Moscow the main effort should be directed against the Soviet drive south from Leningrad. The Soviet advance here is slow but poses a greater threat. The Russians have a higher force concentration and are driving down a supplied rail line. So it felt that if this is main threat. In addition the German positions here have some fortified sections and are in generally good terrain. Further still as the northern bulge contracts this allows for a greater concentration of force.

Nevertheless German infantry on the left flank abandon their forts and try to exfiltrate south to avoid encirclement from a Soviet mech corps which has now reached the Valdai lake system. Just 16miles East of that corps’ thrust south a 6-10 Mot xx/Artillery stack is forced to surrender its position without a fight and withdraws under threat from superior Russian forces,

The Soviet thrust north Moscow has already outran its supply chain and is thinned. With substantial Axis forces moving West it is believed that the genie can easily be put back into the bottle.

The troops in the East fall back in good order protecting the slower infantry and artillery units. Fortified units remaining against the Upper Volga river (now frozen) hold their positions and a brave infantry division moves out of its redoubt to ZOC and impede the neck of the Soviet spearhead.

Even so the situation along the Veliki Luki Railroad is delicate with only light forces guarding the line. 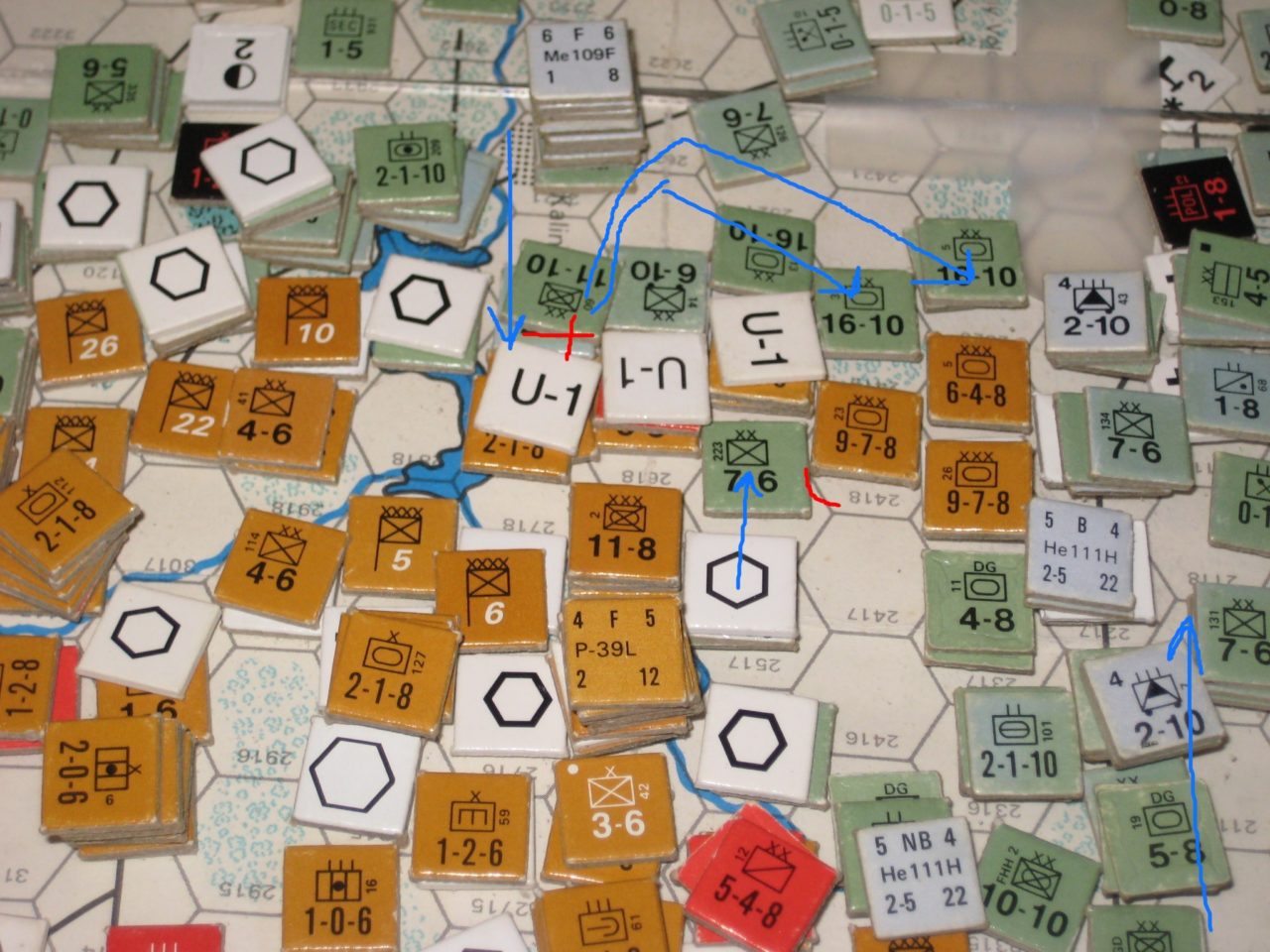 AGS: With the majority of offensive capable ground troops transferred north the Axis forces engage in local moves and redeployments to optimise their defence of the great bend of the Don River. They do maintain an occupation of the swamps immediately south of the river to the west of Rostov as a trip wire defence against any Soviet attempt to try to retake the city. Mobile forces meanwhile re-deploy to reserve leaguers at rail nodes.

Air War. Dive bombers assist the attack against 34thxxx and medium and long range units move to provide DAS at critical weak spots in the line. 2 Hits are made against the Leningrad/Kalinin line. The northern force receives a mass reinforcement as fighter and bomber squadrons transfer north from AGS and AGC.