There has been some recent exchanges regarding weather absolute losses or relative losses are more important in determining the relative performance to date of the combatants and what losses might be expected at this stage.

Thus I have started noting the loss ratio which I will add to each of the combat reports on a turn by turn basis.

I thought it might be interesting to some to include details of the losses to date at this approximate half-way point in the game and the following charts show absolute losses and relative losses (expressed as Axis/Soviet per turn). 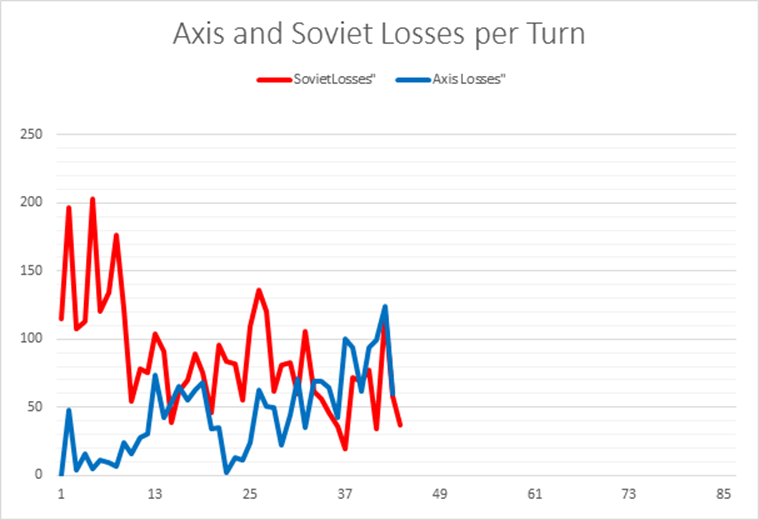 A few points to note about the charts and figures:

I have not played/recorded Scorched Earth enough times to be able to give any significant insight into the figures although any insights or observations others care to give would be interesting and useful. What is clear however is the shift from Axis to Soviet in both gross losses and in particular loss ratios. The latter from approximately 10:1 to 5:1. 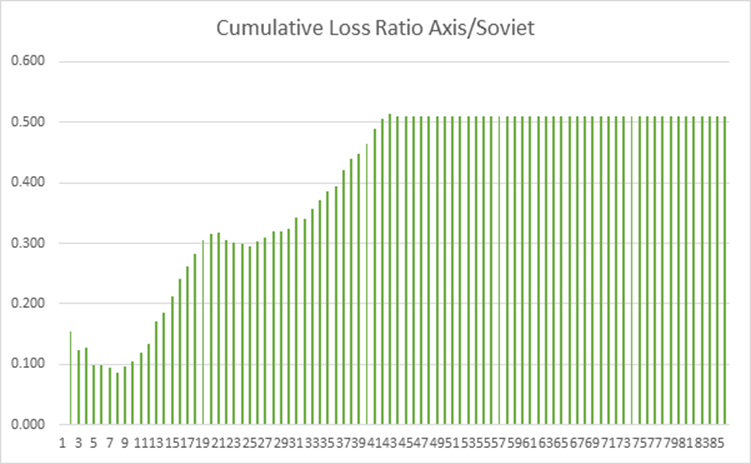 Surprisingly there does not appear to be any weather related differences that can be seen in the figures probably because both combatants have sustained offensives throughout the poor weather seasons.

Finland & Army of Norway: The defensive perimeter established around Murmansk gains some much needed supplies by sea

In the south supplies arrive by Transports and Gliders to feed the German part of the Helsinki defence force. Finish fighters abort the lone guards fighter which tries to penetrate the transport stream. The transports and gliders land without incident.

The Finns take advantage of the repulse of the Soviet last attack and a brave 5-6 inf XX exits the city to a certain death in the hope that it will buy another week of resistance for the city by shielding the approach of the Soviet hoards. 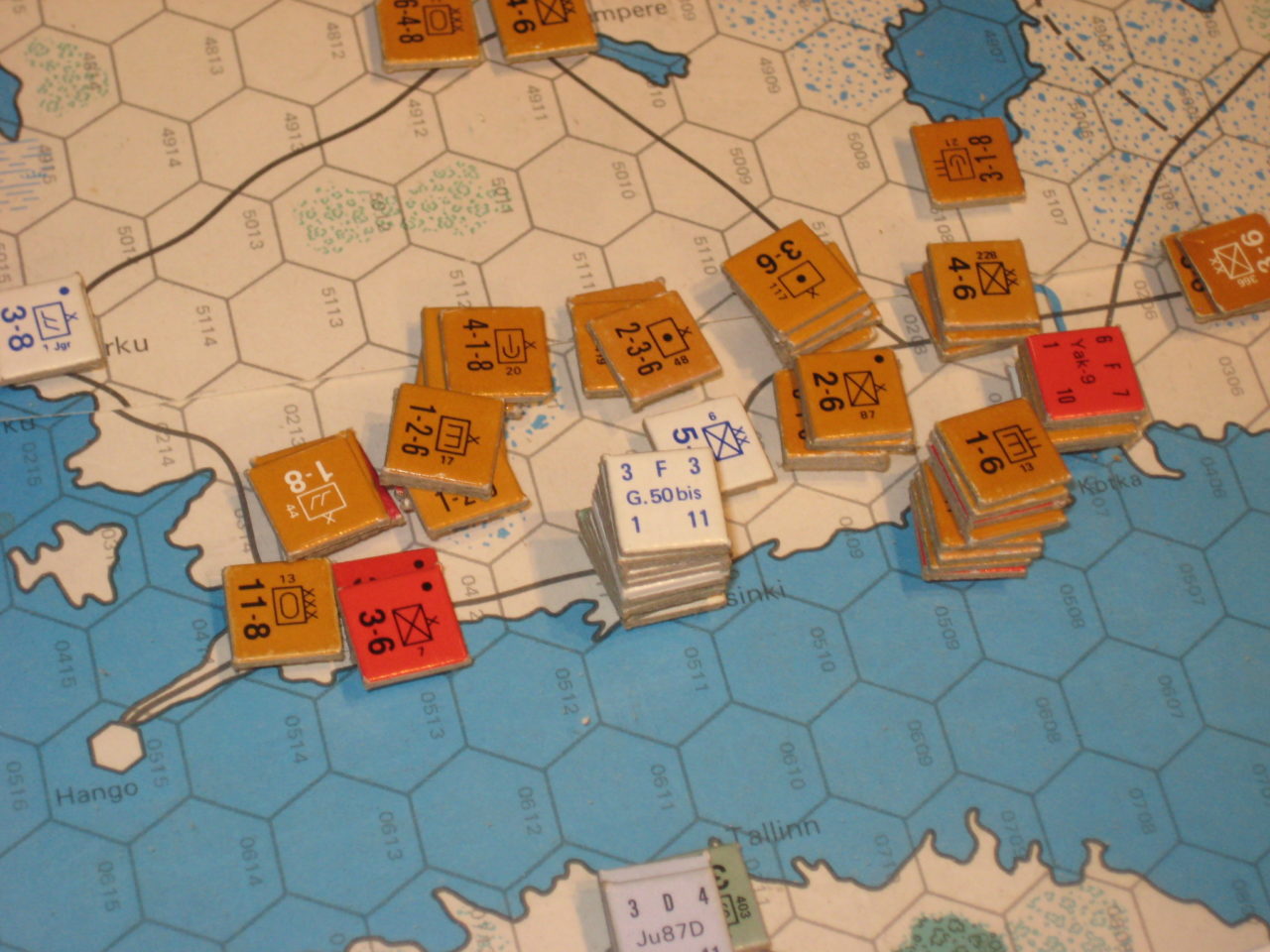 AGN:. The Axis face a dilemma do they fall back another hex to straighten the line following the penetration by the Soviets or nip off the one hex bulge? They decide the latter and all available forces mass against the intruders.

The similar bulge into the German lines south along the Leningrad axis is still too strong to attack with local forces but itself cannot breach the defenders line so is left unmolested.

AGC: No activity other than fort construction as the Axis build up defensive hubs around Bryansk, Orel, Kursk etc.

AGS: Thinned by the exchange against the Axis forces the previous turn the Soviet defenders crumple east of Voronezh and the Axis establish a tight ring around the city isolating within the ring both the city and an adjacent fort.  The ring is strong and the Axis are confident that it cannot be breached. Reich minister Goebbels prepares a speech announcing the fall of the city. 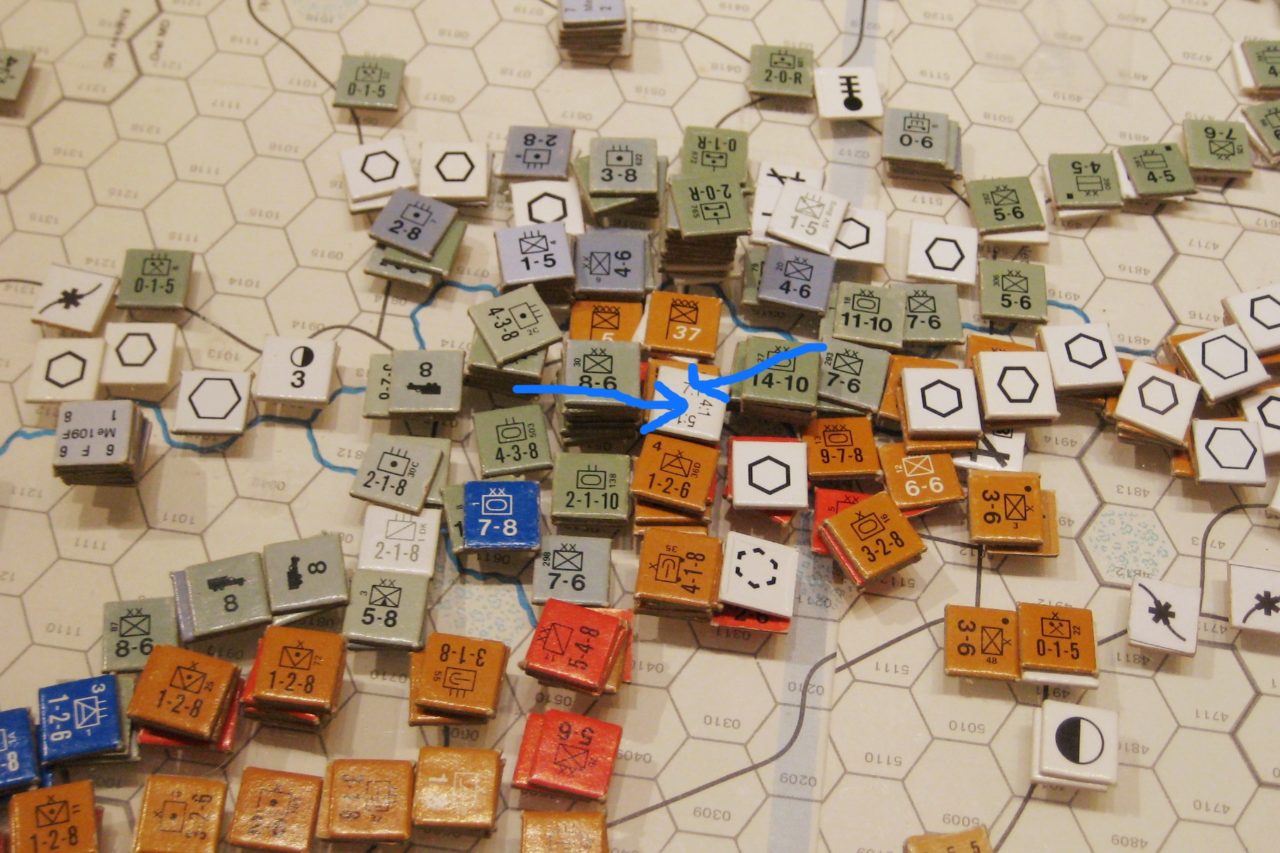 The Encirclement of Voronezh

Air War: Most Axis air activity is establishing and protecting DAS with some rail bombing around Voronezh although the latter fails completely to inflict any hits.

The Soviets decide to employ a “fighters First” strategy and in all intercepts mass against defensive fighters. This back fires in one significant engagement where a lone FW190A eliminates all 3 interceptors sent against it; (Mig3, Yak7B, Hurri 2B)