“This is radio Free Finland transmitting. The Bolshevik attack started 3 hrs ago and we are already receiving reports of enemy breakthroughs across the entire perimeter. We advise you to lock your doors and stay away from windows. Use a basement if you have it.

About half an hour ago we witnessed a large air battle and our air corps displayed courage and their heroic deeds beyond their duty fighting through swarms of fighters and downing by my count over 30 enemy aircraft, others fell to AA fire from the Kapyla batteries. The skies do now appear clear and it is equally clear that the enemy will draw no aid from the air for their attack”

I do not know how long we can continue to transmit; I can see a column of tanks moving towards us with brown clad troops marching along each side, squads are breaking away periodically and clearing the building down Alexsanterkatu.

As a result of our airmen’s tenacity and determination we have heard that ministers have been safely air lifted out of the city and are to continue the fight from Turku where the remainder of the army stands to protect the government. Commander-in-chief Mannerheim however has refused to leave the city and is staying resolute with the heroic defenders of our proud city.”

“A few minutes ago I saw enemy troops enter the ground floor of our building, There is  commotion now on the stairs and a lone rifle shot has been answered by a long burst of automatic fire.

This is Free Finland transmitting for the last time from Helsinki, Continue the fight”
BANG!!
“Nyet Radio!!”
“do not give in,”
RAT TAT TAT; “do not surren ….” TAT TAT

Finnish Front: In the far north the inexorable march continues and the last remnants of German resistance in the centre are eliminated.

In the south the lone Finish division outside Helsinki is crushed and eliminated but fantastic action by the Finish air force (with some help from Tallinn based Luftwaffe units eliminates or returns all Soviet GS and drops the planned odds from 3:1 to 2:1. Engineers are on hand to avoid a potential rout and the attack goes in . A HX secures the city for the Soviets.

Only Turku and Ponri remain in Finish hands. 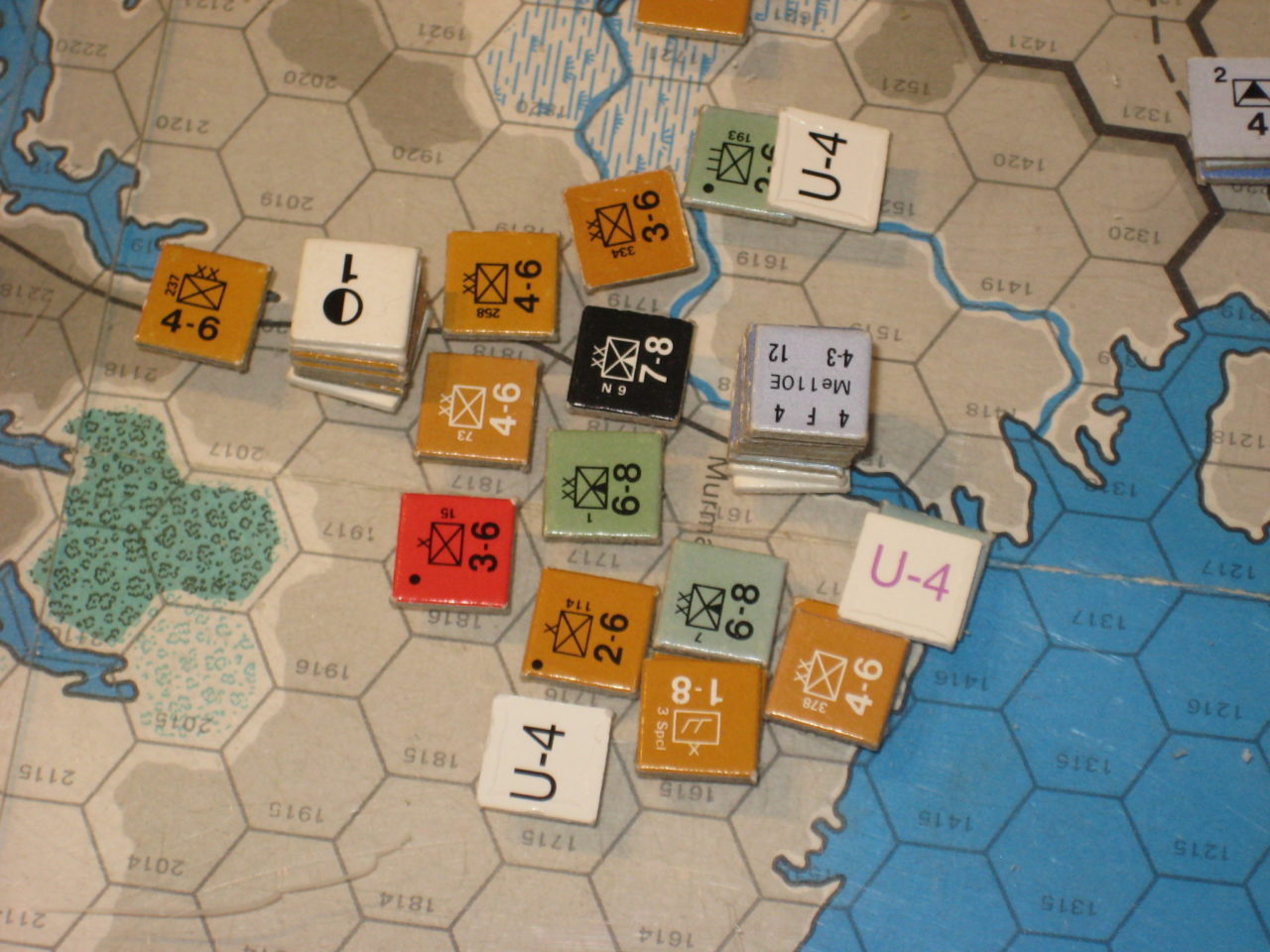 The front around Murmansk

Leningrad Front. The Soviets have practically suspended operations south of Leningrad and move the remaining mech forces back to Leningrad for refit/redeployment. A desultory opportunistic attack at the west end of the line results in an NE.

On the Kalinin axis a single attack against the German MLR unseats a large stack from a fort but the German forces retreat in good order.

Moscow Front: The Soviets content themselves with redeploying artillery and other units to central Moscow with a view to a future attack against the last hex in Axis control.

Voronezh Front. The German encircling ring enclosing the city of Voronezh is too powerful to attack directly but the opportunity to strike against the weaker flanks is not lost and two large stacks are attacked one eliminating two German infantry divisions. The second attack and a series of others south of the besieged city prove less successful and result in a series of NEs and DRs against the defenders.

Air War: The Finish air force prove once again that their effect far exceeds their paper strength and numbers. A MS406, F2A, G50 square up against 2x Guards Yak9s and a Yak 1 allowing two accompanying ME109Gs out of Tallinn to sweep away 2x IL2s.  The remaining Il2 is removed by accurate AA fire. Whilst a great victory that causes some consternation to the attackers by dropping the attack a column all is in vein as a HX results from the resulting 2:1 attack.

The majority of Soviet air activity on the main Front has been forward deployment and transfers to new airbases to keep up with previous advances.

In the Moscow area this was attempted by mounting a large raid on the German held Hex’s airbase.

A costly exercise: Of the 12 aircraft involved 3 are eliminated, 2 aborted 1 is lost to flack and the survivors fail to achieve a single hit!