The game reaches a critical phase as the Axis forces approach their objective to the north of Moscow.
So this turn is one of decisions.

For the Finns – do they fall back as fast as possible to defend the capital or do they fall back slowly in the expectation that their foe will be crippled by events further south and they can resume their attempt at restoring the losses of ‘39.

For the Germans attacking along the rail line to Vologda – Do they continue their assault East plunging out of supply to obtain their objectives or…
Do they turn inward and eliminate the bypassed forts to their rear to secure their supply lines or…
Do they turn southwards and join with the force thrusting NE from Moscow to surround the East bank fort line thus trapping yet more Soviets.

For the small force moving from Moscow – Do they try to nibble away at the East bank forts, or
Do they attempt to breakthrough to the NE.
If they succeed – Do they play safe and slowly grind forward or
Do they exploit and spread out to create maximum disruption in the Soviet rear?

For the Axis in the South – Do they attack the Soviet tankers head on in a clash of armour or
Do they try and strip away the tanker’s infantry support or…
Do they reverse direction and turn inwards to eliminate the fortified line at their rear?
Either way do they then consolidate their gains or push onwards to Rostov?

Finland and the Army of Norway: – The Murmansk force continues to push south but only manages to retreat a 3-6xx, however this is driven west of the lake system and away from the rail line.

Level heads prevail in Finland. The Fins decide to pull back one hex on the main front to shorten the line. A 3-6 German inf cadre leaguered in Tallinn for possible rebuild is given new orders and sails to Helsinki releasing the Finnish Cavalry brigade there which reaches the North bank of the rail causeway behind the Soviet Tank corp and cuts off the rail line to Leningrad. An infantry division from the main front joins a 6-6 infantry xx pulled from the defensive fort line shielding the approaches to Helsinki and together they ZOC surround the Soviet breakthrough force 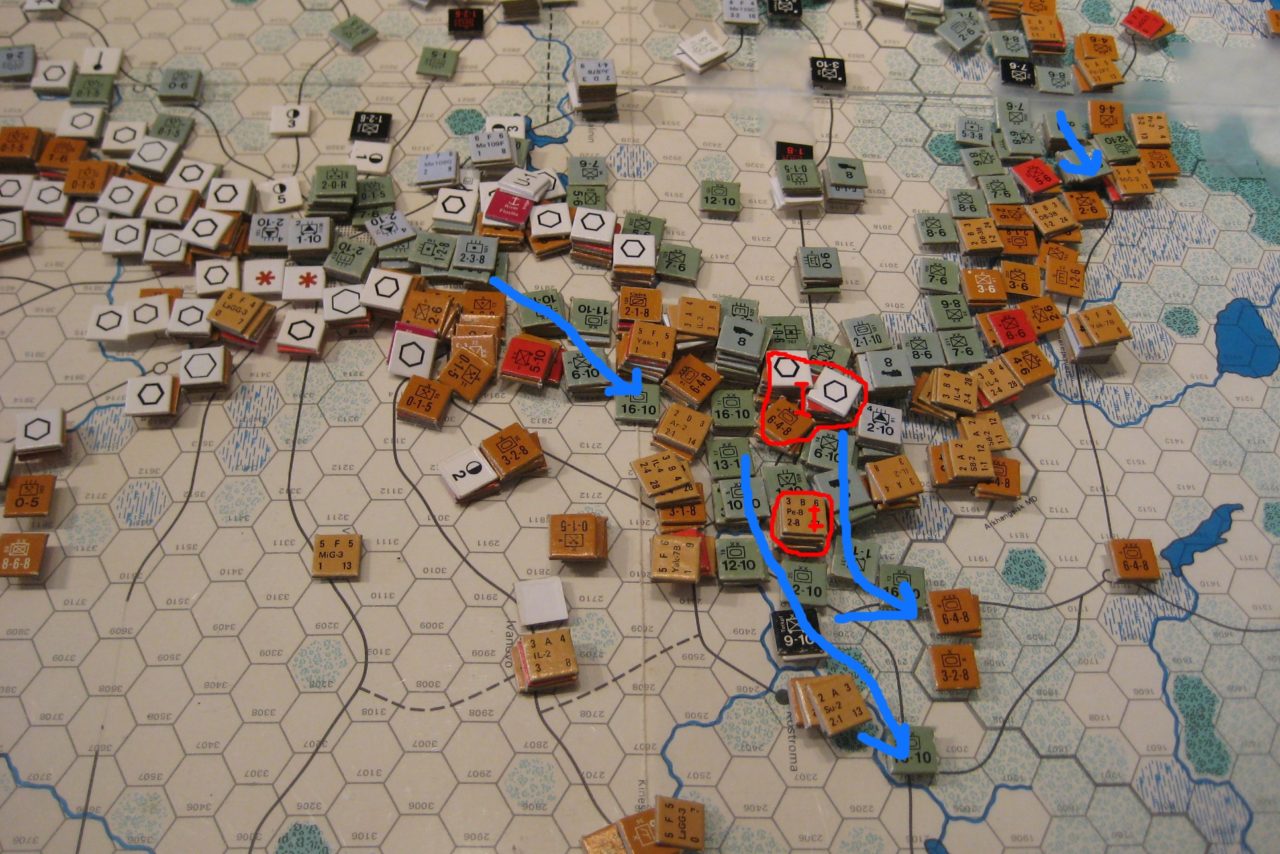 Advance units reach two of the objectives of Operation Meatgrinder

AGN. The Germans north of the Valdai mass and gain another forested hex but still only have a single foothold on the Leningrad/Volodga rail line.

In a heated exchange which almost costs at least one Field Marshal his job the German Officers who favour a methodical approach with fort reduction are overruled by an agitated Fuhrer who insists that the eastward momentum must be maintained at all costs. So the panzers drive East in two parallel columns. Both attacks succeed and advance units occupy the river bend adjacent to Ivanovo and 30 miles north. A lone 16-10 pz detaches from the rest and occupies the vital wooded rail junction at point 2107.

The Fuhrer is vindicated as Leningrad/Archangelsk and the North are cut off from the rest of Russia.

The drive NE from Moscow continues at a more cautious pace.  A 6-4-8 is reduced to cadre and retreats into an empty fort behind. This however is a costly victory for the attackers because a 10-10 pz is cadred in the HX. The relief of the Soviet remnant is short lived however as the cadre is overrun in the exploitation phase.  Caution prevails however and the Germans halt and pursue no further content that their advance places another fort out of supply and closes the gap to the main line of advance to 16 miles. 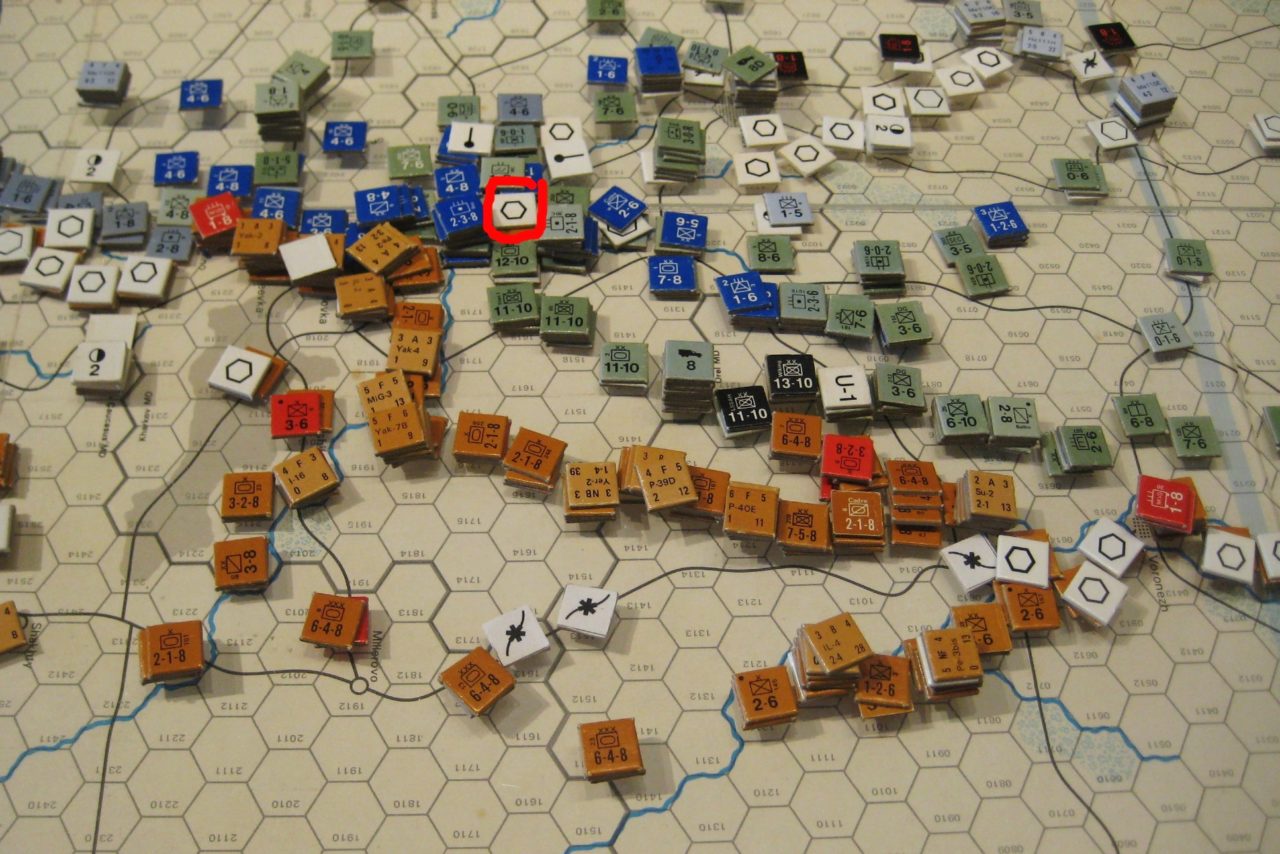 Axis forces consolidate in the South

AGS: Contrary to action in the North the Axis forces here turn inwards and eliminate the by-passed fort line. All but one of the forts are annihilated by a combination of massed infantry and artillery over the river and attacks from the Soviet’s rear by the mobile units. Most fall to automatic surrounded attacks. The Axis forces here are strengthened by the Rumanians from Odessa who can now fully engage in the attack. Territorial gains are limited to a penetration of some 80 miles but the attack as desired has drawn of at least 50% of Soviet armour and eliminated the fortified line over a 180 mile frontage. In exploitation the Axis consolidate and form double stacks of divisions which should prove immunity to any Soviet counter thrusts.

It is up to the Bolsheviks to make the next move.

Air War: Some attacks are aided by GS particularly in the north. Soviet rail lines in the south are targeted with some success to try to prevent the Soviets rapidly re-deploying their armour assets from the South to the North.