Do they fight to save Leningrad or
Do they start evacuating the North?

Evacuation now while most units still have full mobility would be wise and help to save the army for another day and Leningrad only contributes 3 IRPs per turn and whilst it does still have a factory this now trapped.

On the other hand the troops of the Leningrad Front are well emplaced under forts and/or good terrain along most of the area to be evacuated and are roughly at parity in terms of strength points with the German forces opposing them. Should they remain and drop to half strength the Germans would not necessarily break through at will or in too many places sufficient to initiate a rout.  In addition holding fast along this long front does tie up many German troops

However the arrival of 4x 9-7-8 Tk XXXs three of which can engage the enemy forces in the Moscow/Kalinin area decides the issue. The Soviets decide to hold firm and strike back at the German panzers.  The Soviets can still pack a punch and although they have been dealt a hefty blow they are not out of the fight yet.

STAVKA sifts through the various reports and finds weaknesses in the German dispositions where they have thrust forward with parts of the line of advance held by infantry and support troops and some by lone AT battalions.

They thus prepare their counterstroke and commit all their re-enforcements and last reserves into the battle.

The fate of Mother Russia will be decided over the next couple of months.

Finish Front: The line south of Murmansk falls back again and reaching superb defensive line around the lakes of the Kola Peninsula they decide to make a stand. Due to the increasingly alarming situation in the Kalinin sector the offensive into the heart of Finland is suspended. The isolated tank corps retreats back south the way it came but finds the Cavalry brigade blocking the path home. North of Ladoga the Soviets attack a lone finish infantry cade and eliminate it in a HX.

Leningrad/Moscow Front; The Soviets are not positioned to be able to clear the crucial rail-lines interdicted by German advance units so they devise an indirect approach. They launch a wave of attacks aimed at the weak points of the German advance targeting the enemy formations as close to their main line as possible to cut off as many units as possible and thus minimise the German’s capacity to counter attack. In this they are aided by 3 of the newly arrived/ upgraded 9-7-8 tank corps and many existing 6-4-8s. They also employ massed katyusha batteries. With colossal air support using every airframe which can reach the battles at standard or extended range most attacks gain at least one and some two column shifts for GS. (In one particular battle they miss a shift for the sake of 1/3 GS point, such are the fortunes of war and flak die rolls). 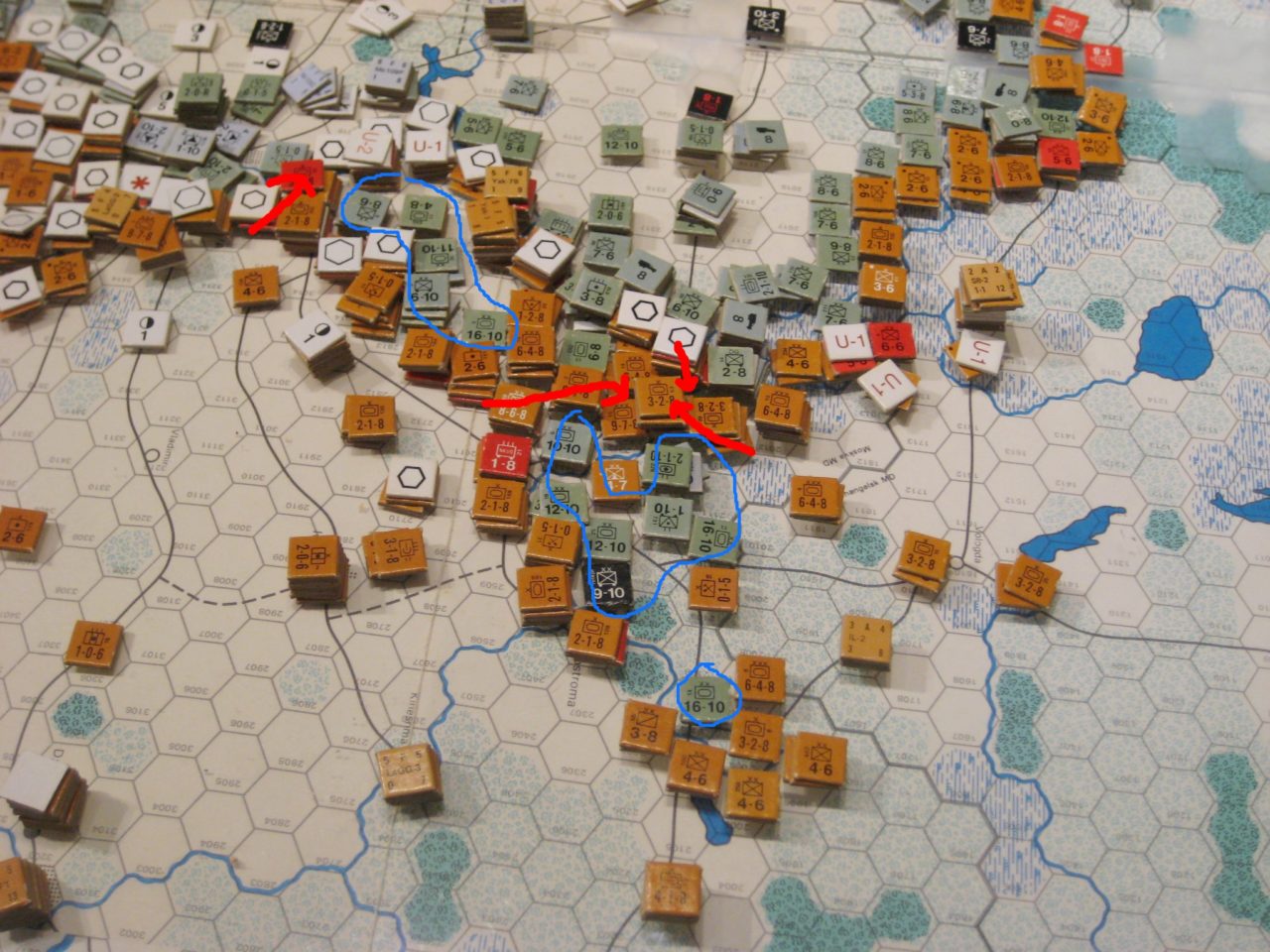 Jul I ’42 – The Soviets strike back NE of Moscow

They set up 4 attacks and lady luck for once is on their side. Every attack is successful many gaining DE results (rolling 3 sixes in a row did help).

Attack 1 – Aimed at the German infantry/artillery stack at the bridgehead NE of Moscow this attack completely eliminates 2x inf xxs and a mot art brigade. This isolates 2 other German panzers, one mot div and artillery assets which are now trapped behind the Soviet fort line and high value defensive stacks blocking the path east.

Attack 2: Targets a 13-10 panzer holding the southern ring of the doughnut shaped advance past the pair of forts on the east bank of the upper Volga astride the rail line to Yaroslavl. This is eliminated and the cadre retreats back towards the German front lines.

Attack 3: This goes in unsupplied from inside and outside the Soviet pocket with massive air support. The Soviets attack a mixed stack of a 6-10 mot div, 2-10 eng, 2-1-10 stug, and crucially the forward-most Truck. Again a DE eliminates the stack with the mot cadre falling back westwards.

Attack 4: A bypassed stack attacks out of supply against a lone 1-10 AT units holding a channel open to supply the Axis spearhead at the start of the turn. It is eliminated.

The difference this time when compared to previous such counter-attacks is that the Soviets now have sufficient mobility with the new Tank corps to exploit into the gaps created and form a very strong armoured wall. This wall cuts the Germans off from their comrades to the West and fractures the German swerpunkt into a number of cut off sections. The escape South for the panzers is barred by troops lining the river around Yaroslavl. The way East is blocked by fresh reinforcements railing from the Urals and the way North is blocked by the last reserves from Leningrad and from units pulled out of the line against the Finns.

Time will tell who finally gains the upper hand.

Voronezh Front: Due to the emerging crisis far to the north approximately 2/3 of the Soviet attack corps/katyusha combos rail north. In this they are greatly hindered by some strategically placed rail breaks courtesy of the Luftwaffe which slows the redeployment. 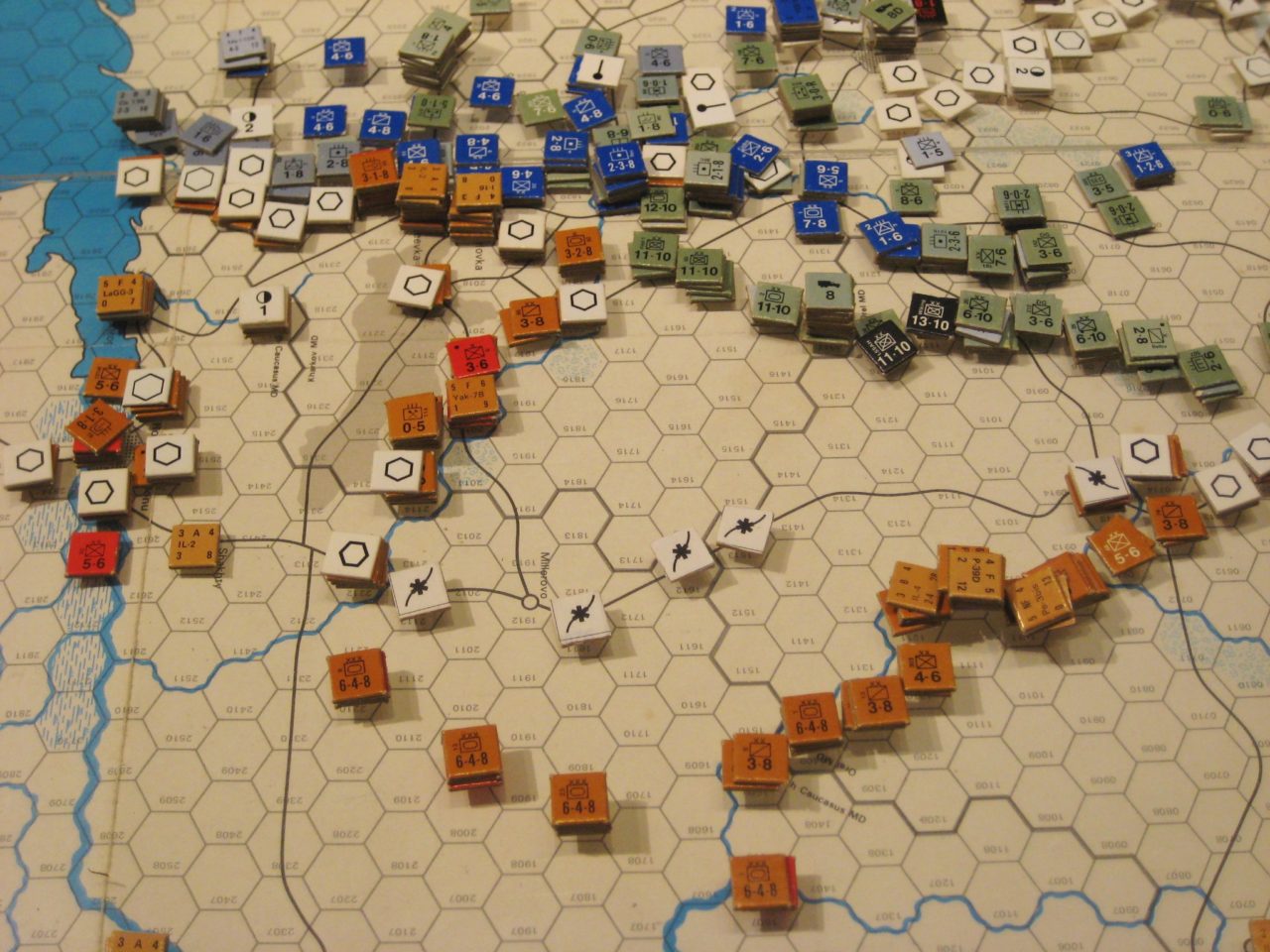 Jul I ’42 – Soviets call retreat in the South, awaiting the Axis next move

Consequently the Soviets call off their attack much to the annoyance of local command who were keen to inflict more losses on the aggressors.

Infantry/cavalry/AT combos fall back behind the river lines north and south of the breach and the reduced number of armoured corps move SE in the direction of Stalingrad just out of range of the bulk of German motorized assets. This forms a large inverted bulge in the line tempting the Axis to move East into it. The Soviets sit back behind their defensive wall and wait for the Axis to make the next move.

Air War: All attacks gain massive air support except for the attack immediately NE of Moscow where massed Me fighter squadrons stationed in the city make this area a no fly zone for the VVS.