The failure to inflict any casualties on the main front last turn, the potentially disastrous isolation of the Leningrad spearhead and the melting snows convince STAVKA that it is time to call a halt to the Winter Counter Offensive.

The results are disappointing yet for a time were tantalisingly close to success. The capture of Bryansk was perhaps a pipe dream but certainly it was hoped that Kursk and Orel would both fall allowing two interlinked bulwarks to keep the Nazis at bay. With only Kursk at that right in the front line the plan fails and so the whole line is ordered to disengage.

South of Leningrad the drive south just failed to reach the vital Moscow Road which would have caused a lot of problems for the Axis if it would have been taken.

In this secondary drive south from Leningrad the offensive is over due to enemy action and the initiative is lost. The spearhead moves to extract itself without combat while relief reinforcements move south to aid safe passage but constant harassment from the air prevents any direct intervention.

The Soviets review their options for the coming year.

Their plan is defensive and by nature must therefore be reactionary. However a defensive plan is to be put in place to limit and contain Axis aggression.

The Soviets have maintained throughout the winter a fortified defensive line stretching now from Mariopol on the Sea of Azov to the Volga Canal north of Moscow where it joins the swamps. There is a small E-W section north of the Valdai and then the line is solid from Dno to Pskov where the lakes mark the front line north to Narva.  Planned extensions are to place a fortified ring around Tula which with the remaining Moscow hexes will form a defensive hub. The line is manned with a minimum of 7 points throughout its length.  The Soviet plan calls for the withdrawing attack elements to leapfrog the line and take up interlocking islands of resistance to the east of it. Infantry will form a continuously ZOCed second line with islands of resistance at strategic rail hubs and river crossings.  Motorised elements with Katyusha support will form Kill Squads to isolate and eliminate any Axis penetrations of the line (that is the theory anyway).

The continuing resistance of the Hero City Odessa is one of the great successes of the war and it is hoped that the city will continue to defy the Fascists particularly as it is tying up an entire Rumanian army.

The tactics in north of Moscow on the Leningrad front are constrained by terrain so here massed infantry with AT and tank battalion support will form defensive lines and protect open avenues and river crossings. Fortification is continuing in the area.

In Finland the Finish advance is of some concern and will need to be met with greater force than has so far been spared, The Soviets still maintain the belief that if Finland can be knocked out of the war by a strong attack into the country this will a great advantage and if possible this will be their aim for 1942.

Finnish Front: The Soviets leaguer outside the German lines at Murmansk and glare sullenly at the defensive ring around their city now firmly in German hands.

In the centre of the long line north they push back launching two assaults and while casualties are light they gain ground in both cases.

The main Finish assault is now within 30 miles of Petrozavodsk so reinforcements arrive and prepare to counter attack. 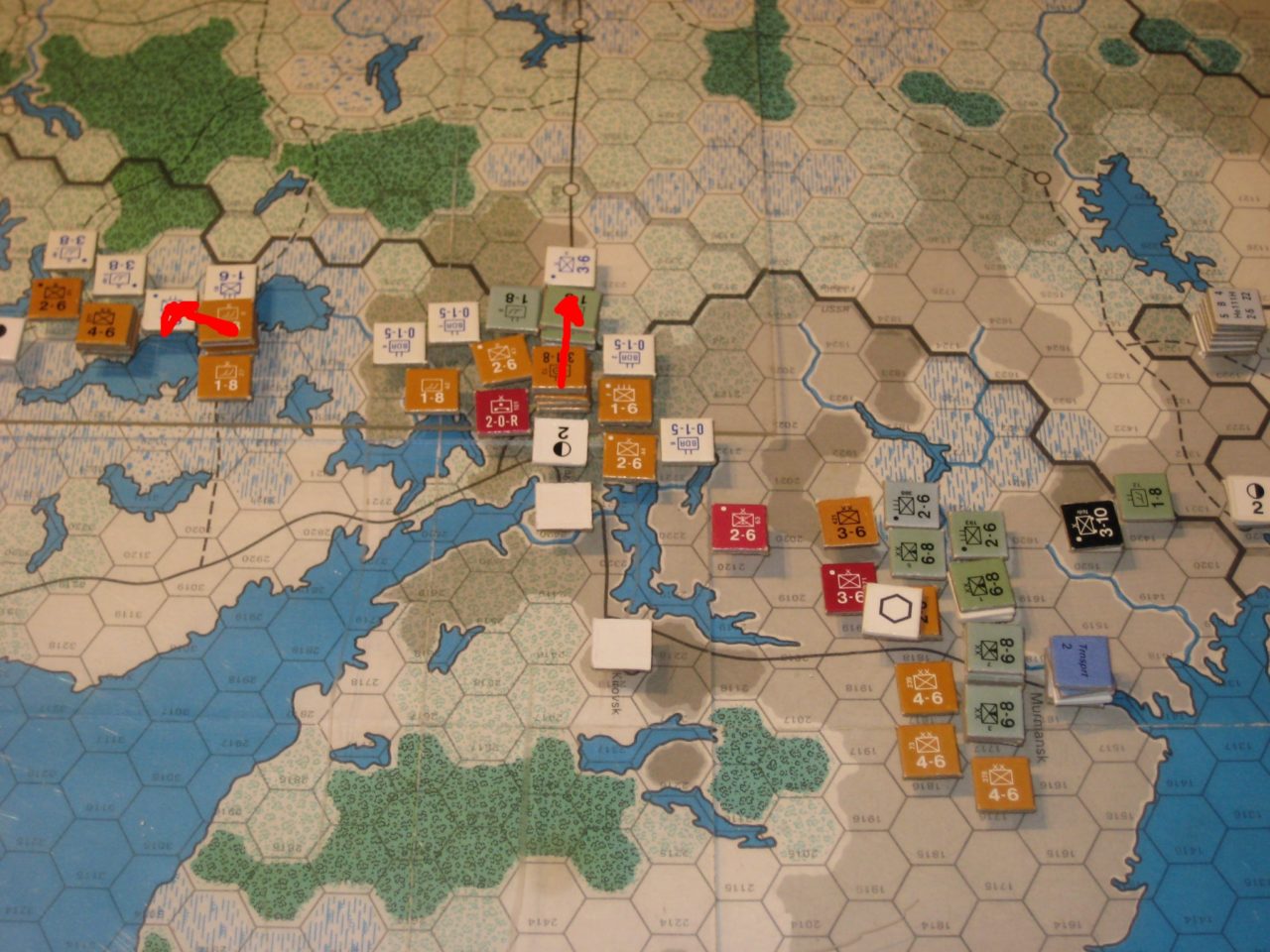 Action in the centre of the north Finland Front.

The troops further north moving west from Narva are only able to force a retreat from the defending German light division.

Further west troops slowly move south through the swamps to plug the gap north of Kalinin but the imminent loss of the vital junction in the forest there will enable German troops to gain full supply without having to rely on long truck columns but this is necessary to prevent the whole line being rolled up. A NKVD infantry division agrees to form the rear guard.

Moscow Front: The Volga canal is fortified and engineers put in place to extend a fortified ring around Tula.

Voronezh Front: The attack force is now reduced to a single line as the rear echelon over the last few months has been fed into the meat grinder. This pulls back as far as possible. Where it will not create holes in the line Katyusha brigades and mechanised troops pull back ahead of the infantry to take position behind the fortified MLR.

Crimea and Odessa; The Crimea offensive is called off and forces retreat to the narrow neck 80 miles west of Kerch.
The Black Sea Fleet is recalled to provide supplies and two CAs are dispatched with ammunition and food to the city of Odessa.

Air War:
A number of deep and medium raids aimed at Axis communication networks produce no meaningful results. The air bridge to Odessa meets more organised resistance than previously and only one transport makes it through although this is at the cost of a ME110c.