Hitler smashes his fist on the map table causing pencils and note pads to fly into the air.  “Kharkov! Kharkov! What do I want with Kharkov? Moscow is the key.”

“But Mein Fuhrer”, stutters the boldest general, “Kharkov is vulnerable now, with Kharkov we unlock the south and eliminate the supplies to Kiev.”

“The Luftwaffe will deal with the supply transports.”  What do I need with another city?  I would rather capture an army than a city. Moscow is the key! Moscow is where Stalin will defend!  Moscow is where he will gather his forces and Moscow is where I will crush him!. 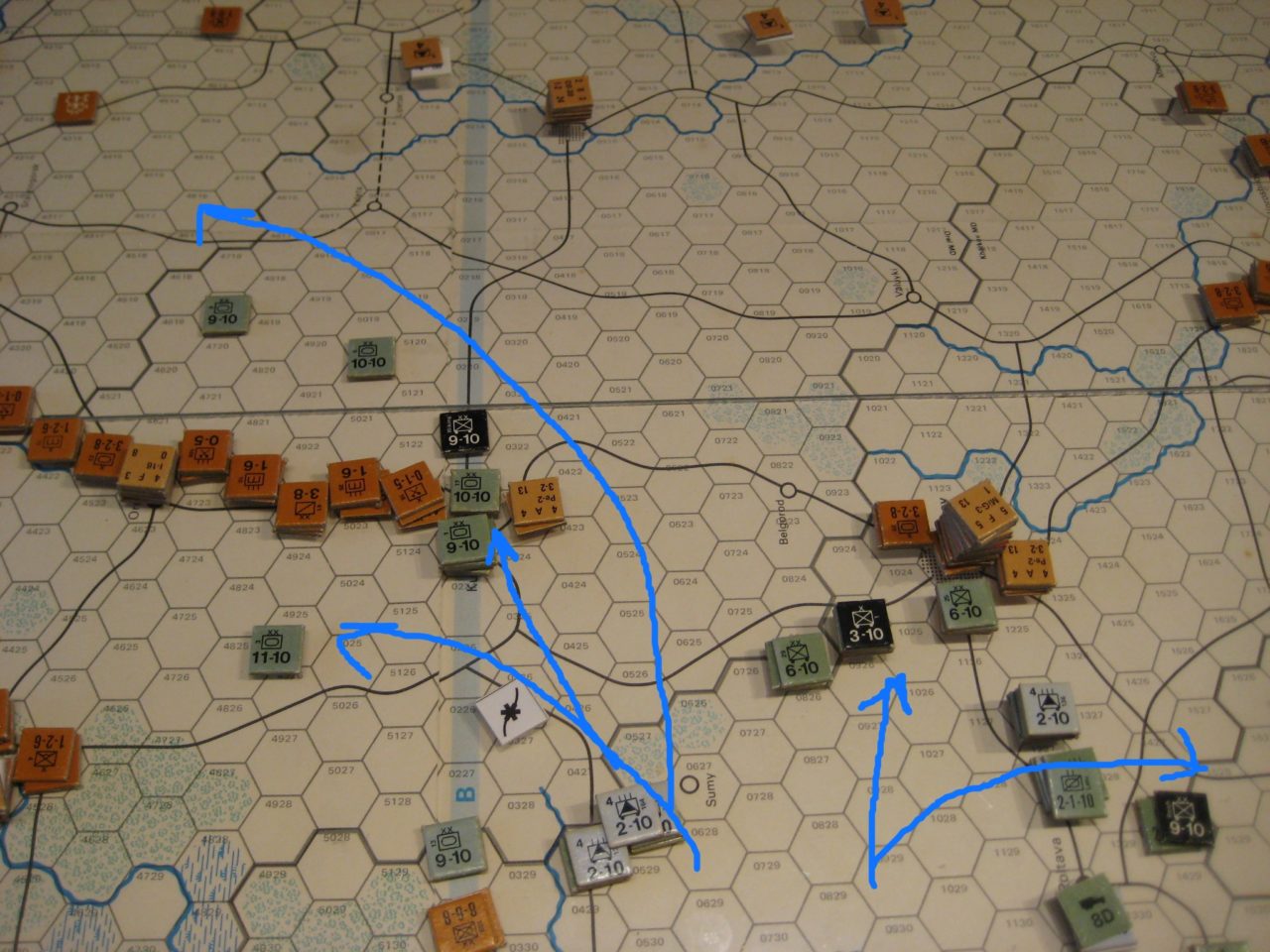 Finnish Front; Army of Norway anticipating a cut off Murmansk advances and penetrates the soviet river defence line. The Fins however withdraw from the Murmansk/Moscow rail line due to the continued attacks from 10th Mech and the arrival of a Tank division from the north.

AGN/AGC; The Soviet mech divisions moving slowly East, blocking infantry from Moscow and Harassment attacks from the air successfully prevent an attack on the Soviet MLR because the panzers cannot reach the line in sufficient force to mount a credible attack. Instead they turn back to trap the Mech and eliminate the infantry units.  To further unsettle the Soviets a mech division penetrates the Valdai to block the Kalinin/Dno Rail line.

The fortified redoubt in the river bend immediately SE of Orsha as a result of accurate AA fire against both Ground Support and a bombing mission to sink the River Flotilla reduces the anticipated odds from 6:1 to 5.96:1 and survives the assault. 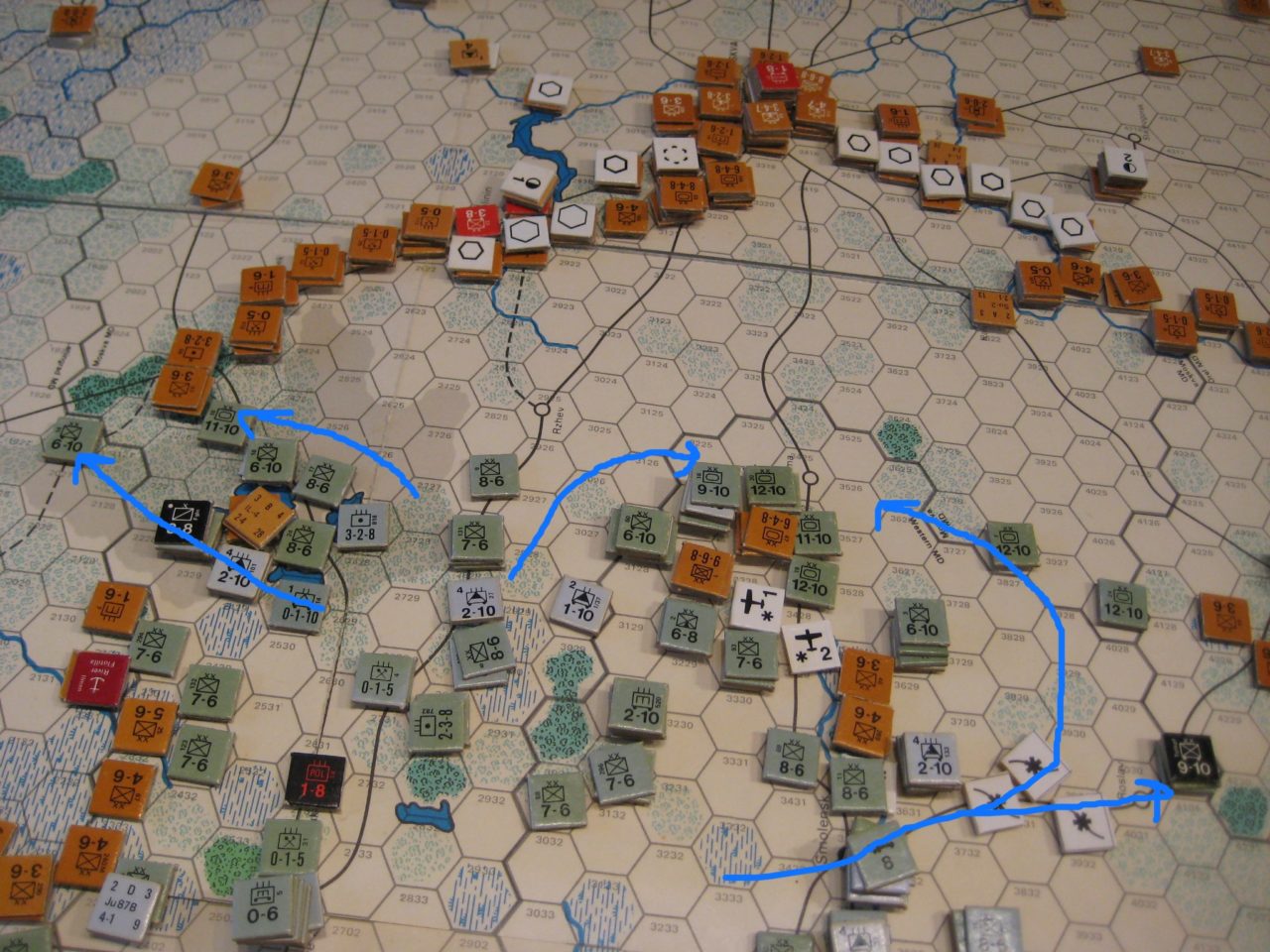 AGS: Here is a different story. Other than some isolated stragglers the Germans face an open expanse of steppe with only Kharkov as an island of resistance between Kursk and Dnepropetrovsk. There is a great temptation to surround the major southern city while vulnerable but in the end the panzers swing north to roll up the southern soviet line which is hanging in mid air. NKVD political troops almost prevent the fall of Kursk but the 3-6 remaining after a DH result is overrun in the exploitation phase and panzers move to the North and East of the MLR to hinder any general retreat East. Unfortunately there is no Truck accompaniment so continued good weather is vital to prevent a dangerous backlash from the Soviets. Time will tell.

In the West two of the three inner forts at Kiev are eliminated and It is hoped Kiev will fall Sept II. The air-bridge is supplying 8 REs of units at the moment so around two thirds of the defenders will diceing for elimination and survivors will be half strength. 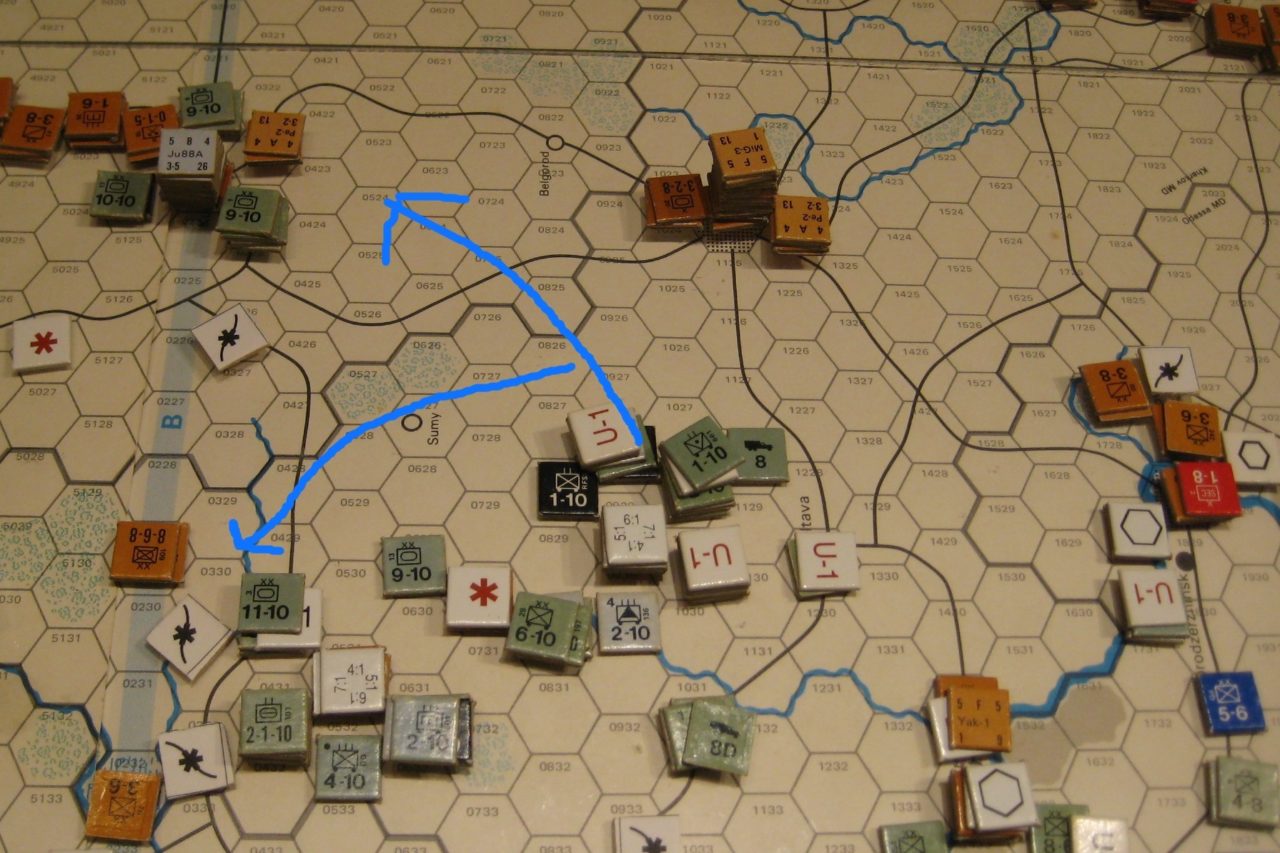 11th Army; Odessa remains defiant as a large stack with Naval Gunfire Support retreats in good order into the city.

Mech units re-cross the lower Dnieper to free the trapped U1 2nd Panzer which then moves East to maintain the blockade of the Crimea trusting the Soviets will not counter attack for fear of becoming trapped and eliminated in turn.