Hans Gruber scans the distance through his Zeiss optics.  His black tankers uniform is a dull brown from the dust of the steppe; that same dust covering his improvised facemask and turning his hair the colour and texture of straw.

His attention is caught by a chevron of shapes cresting a hill with a scattering of birch in the mid-distance.

“Armour piercing!” He yells to the gunner below. “Five remaining” is the reply. Damit, that engagement two days ago had taken its toll, and supplies had been patchy of late. The Ruskies now seem better trained and lead and more resolute. The tanks better employed in nimble regiments, not the unwieldy divisional mass they had out manoeuvred so easily over the previous months.

As he pondered his possible fate, a trail of smoke arched up from the lead shape and drifted down in a green haze. Just at that moment the radio cracked to life.

It was a German voice “Unit to our north, unit to out north, are you receiving this?”

Could it be, yes!, they were German.  As the dots resolved themselves he saw the familiar shape of a Panzer IV.  It was a breakthrough unit from Army Group South. They had done it!  although 16 miles ahead of the main body their recon mission was accomplished.

Surely now the Russians would accept defeat and perhaps there was time for him to be sitting around his home fire with Greta and the kids for Christmas.

Then it started raining. 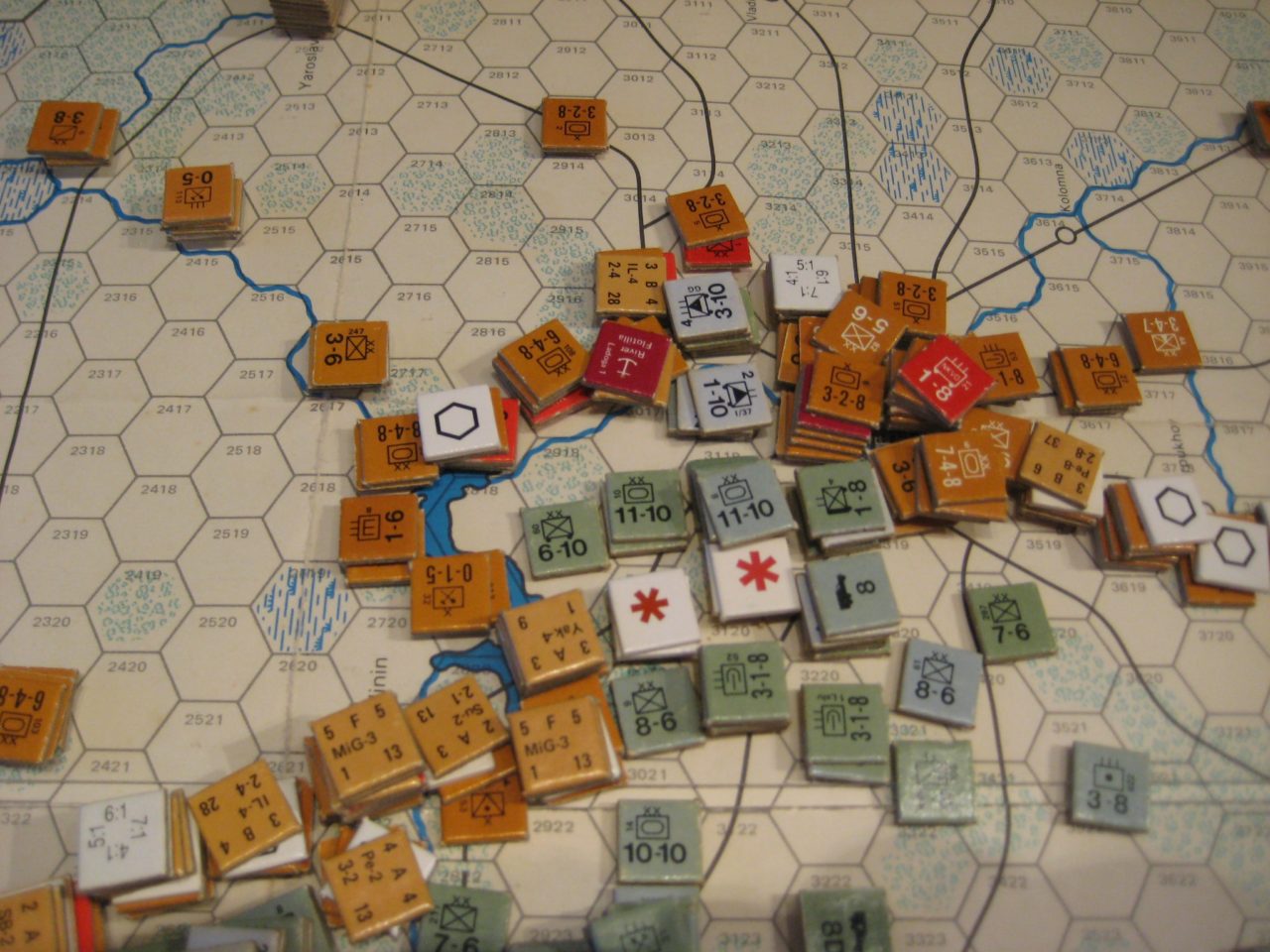 Finland: Despite the mist and rain the Mountain divisions of Army Norway press home their attack to Murmansk forcing the 2 brigade defenders West of the river over the river/into the city.

The Fins are completely defensive on their front.

AGN: The push through the Valdai to the Mosow/Lenningrad road breaks through a Guards division cadreing it and eliminating the cadre in the exploitation phase. The Panzer/Motorized divisions decide not to exploit but sit on the trail line. A lone AA regiment moves along the rail line towards Leningrad.

An infantry attack tries to breakthrough just north of Kaliningrad and whilst the defenders evacuate their fortified defences they retire in good order stopping any exploitation by the motorized support troops.

AGC: The panzers mass into the one hex bridgehead over the Volga canal and strike at the Guards/Tank Regiment defenders who are eliminated. The cadre is overrun in the exploitation phase and the panzers reach the Gorky/Moscow road.

In the rear of this attack other units eliminate the Soviet “peninsular” south/West of the lakes on the Moscow Kalinin road.  Meanwhile the last Soviet Mech corps West of the MLR is finally eliminated.

AGS: The mass of Panzers at Kursk drive forward and slam in to the Soviet line between Tula and Voronezh ripping a 50 mile wide hole in the line and exploiting north and west. The Northernmost Panzer unit crosses the river at Kolomna and the whole soviet line between Tula and Moscow is surrounded and cut off. However the heroic Guards unit who fell defending the Volga Canal bridgehead has prevented a full link up and only an empty ZOCed hex seals the pocket East of Moscow. 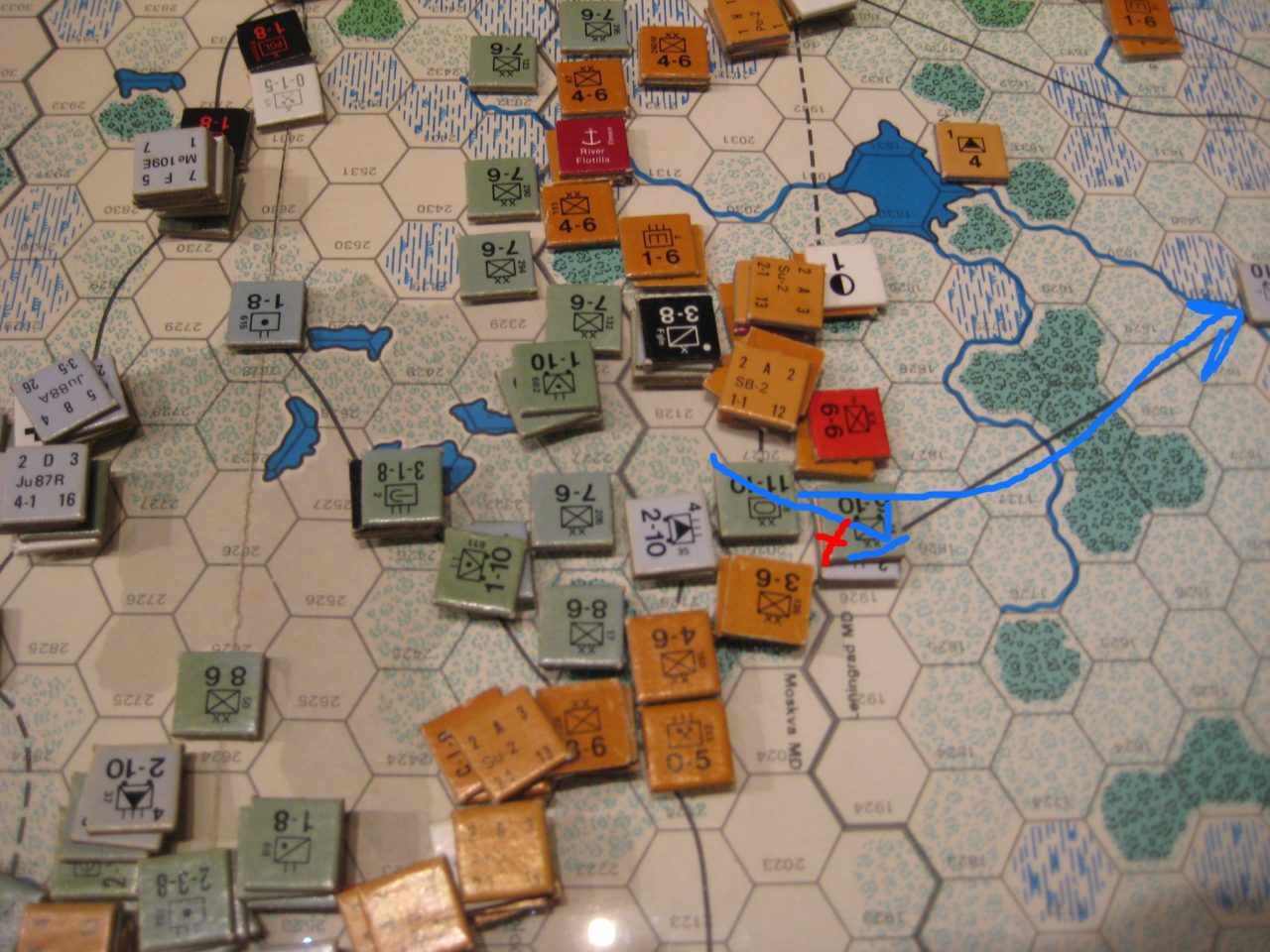 11th Army: The Odessa defence is reduced to the city only and the Luftwaffe causes more damage to the fleet. The single Panzer attached to the army (U1) drives East pursuing the fleeing Soviets from the Dnieper line and with advanced infantry units eliminates the fleeing remnants. The Crimea continues to be simply contained until sufficient troops arrive to push through the bottleneck at the entrance to the region. 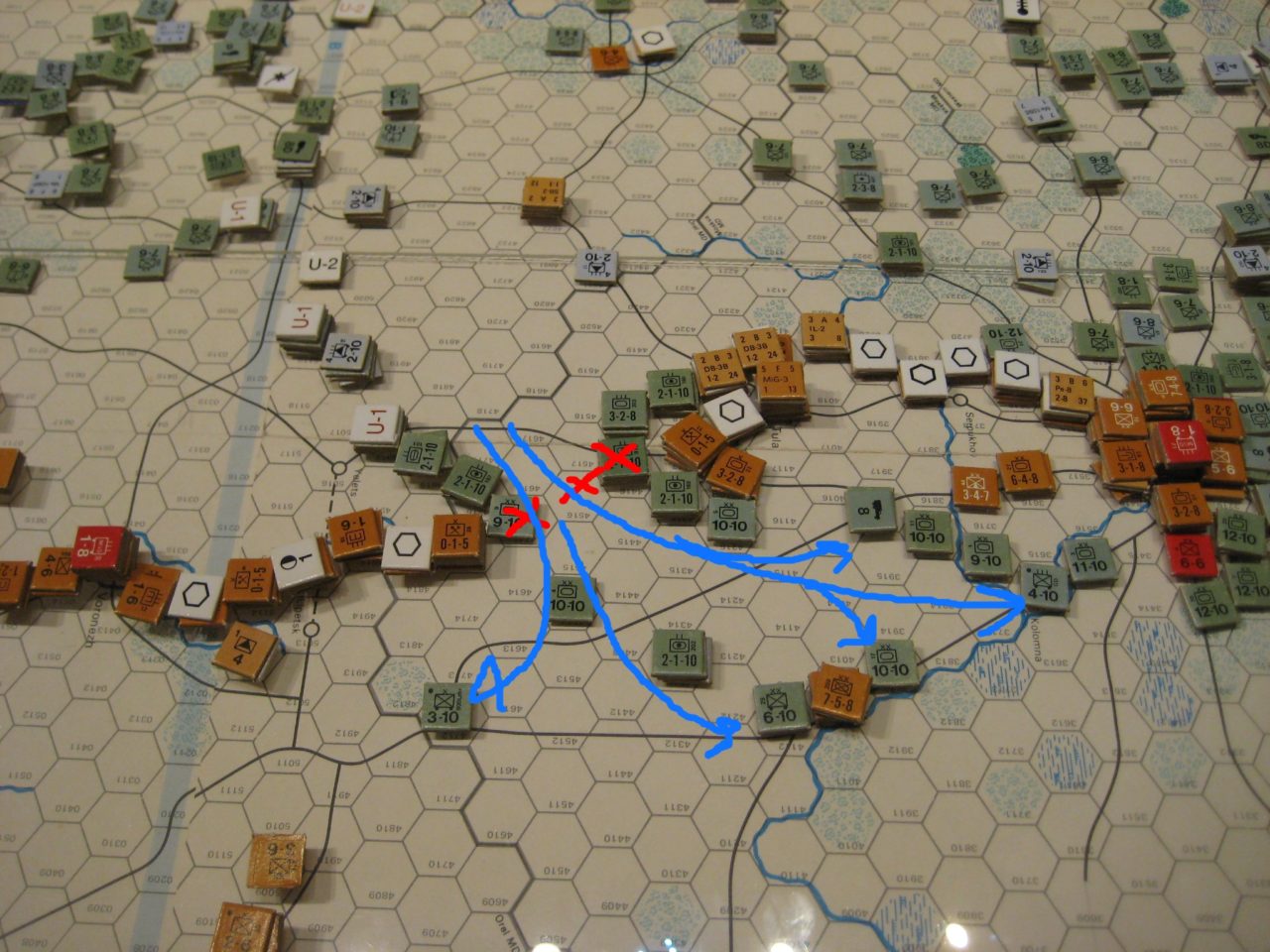