No! not one step back, those are my orders!  The commanders of any unit which retreats will face the firing squad!”

“But Mein Fuhrer!” protests the assembled top brass at the Wolf’s Lair situation table, “We have lost contact with an entire corps who are very low on supplies and we fear are surrounded. The Bolsheviks have already overrun the 17th. Now the 1st, 11th, 17th, 5th and 29 Mot div are cut off.”

Cowards! they have no backbone!  They should stand and die for the Fatherland!

But mein Fuhrer! they may short of supplies but I assure you they are not on short of National Socialist Fervour!

Guderian leans forward over the situation map, “If I may, Mein Fuhrer, we can break the Soviet line here at Podolsk and demonstrate once again our superiority of arms and will.   I have the 24th Panzer division with artillery support and infantry divisions”, Guderian’s hand hovers over the map then jabs at a spot 20 miles North West of Podolsk,  “here,  awaiting your orders.”

“The corps to the East will strike from behind, eliminating anything in their path and join with the 24th from the West. We cannot fail to smash the line and link up with the missing corps and secure our position.

Hitler studies the map and ponders for a second. “Permission granted – but do not ask again.”

Finland: The Finish front after months of relative inactivity bursts into life. The arrival of a German infantry division marching overland from the Helsinki front, a fresh replacement division and a reserve infantry division released now that the Soviet 20th Mech  is made impotent by the mud, allows the Fins to launch a massed attack against the south anchor of the soviet line on the north shore of lake Ladoga eliminating the stack.

Further north an Army of Norway attack wastes precious resources pushing back a lone bdr regiment while in the centre a soviet winterised regiment is eliminated.

AGN: AGN is transferred responsibility of all action south from the Baltic coast to the lakes north of Moscow. This will allow co-ordinated action to eliminate resistance between Dno and Kalinin.

The mixed armour and infantry assault through the Valdai cannot progress further East but continues to enlarge the foothold on the Moscow Leningrad rail line.

Similarly the penetration of the Soviet line just north of Kalinin is also stalled in it’s Eastern advance and is content to widen the breach.

The southern tip of the line is nibbled further to widen the bulge between Moscow and the lakes to the north.

In all 4 hexes and 3 forts are gained/eliminated as the out of supply Soviets around Kalinin weaken. 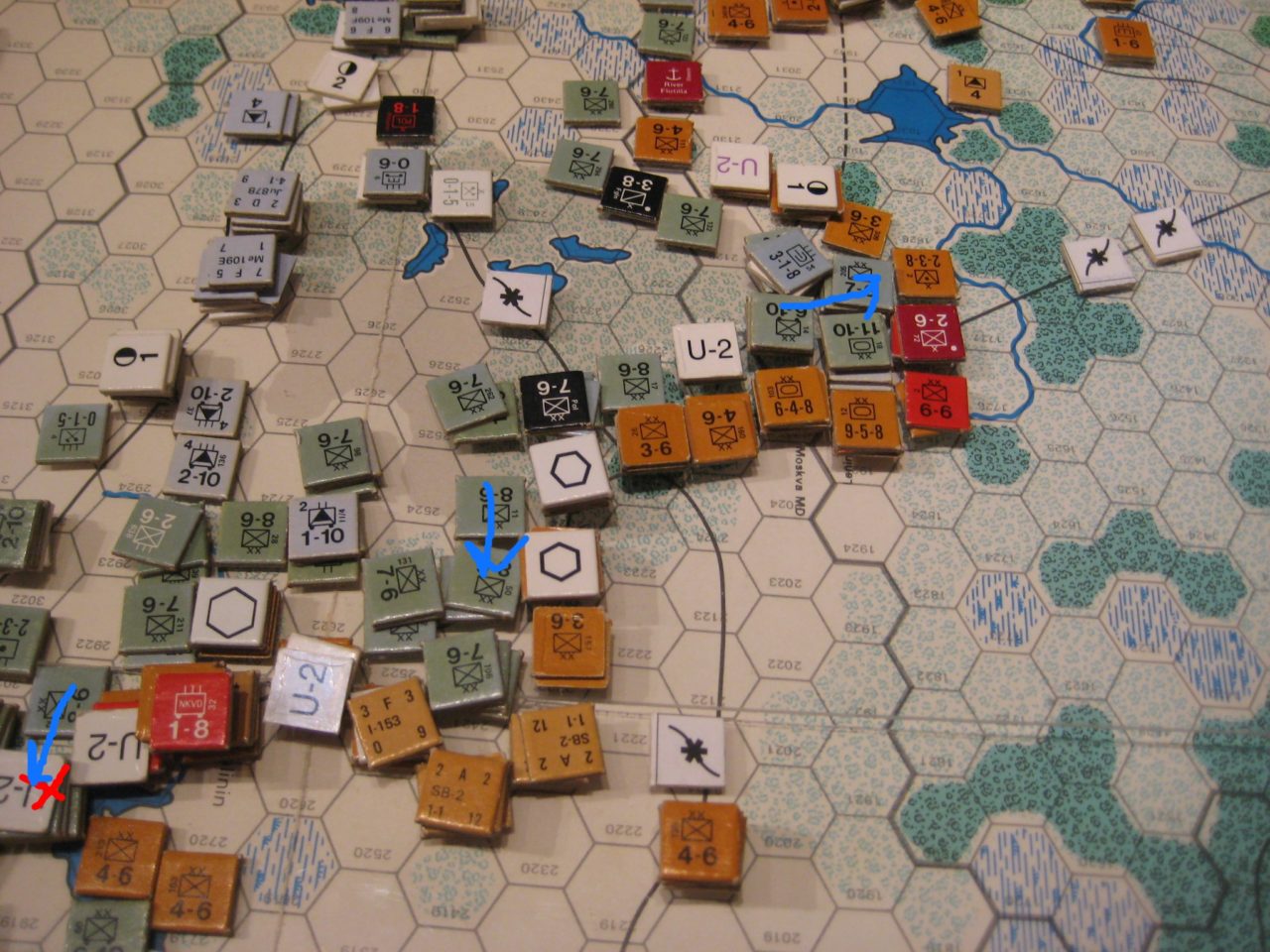 AGC: The panzers north of the Soviet link up to Moscow pull back northwest 2 hexes to consolidate. They hold there as supplies are moving west and they are only a month away from full supply with trucks available to fill the gap.

To the south the cut off corps realise that they cannot hope to survive as the Soviet troops mass and close. They thus move west eliminating a lone Soviet mountain division caught in their path. In a surprise move the 24thPanzer with fresh infantry and artillery support eliminates a soviet fort in the MLR just north of Podolsk and pushes through to link with the beleaguered panzers. Still unsupplied the nemesis of elimination from isolation is averted.

Further south around Tula other stragglers from the bold but over extended German advance manage to reach the main lines and all formations are accounted for. 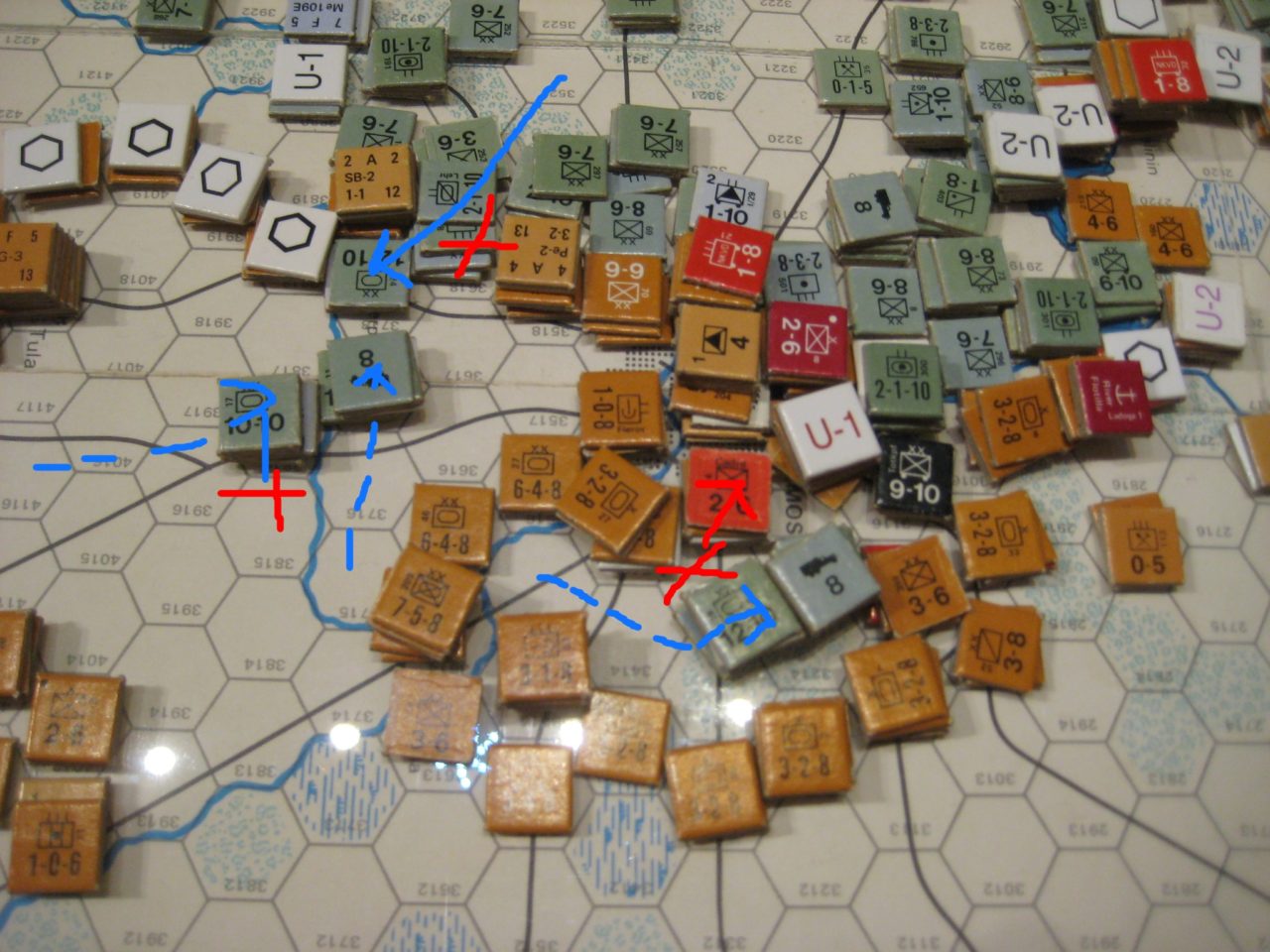 AGS: Minor actions up and down the line keep pressure on the soviet replacement system by eliminating a couple of stacks where targets of opportunity present themselves. One such is the elimination of the Orel garrison and the city’s capture.

The Soviets outside Kharkov are eliminated and a tight ring around the city established. Still unsupplied the Axis await rail conversion, supplies and rail guns before considering an assault.

Axis forces eliminate the garrison at Zaporizhzhia and capture the city, leaving Kharkov as the only island of resistance west of the Soviet main line.

11th Army; The Axis manage to breach the line at the neck of the Crimea but exploitation is minimal simply encircling a stack in the front line and pinning them against the sivash.

With reinforcing cavalry divisions crossing the Kerch straights the Axis realise that the resources allocated to the 11th army are not sufficient and make preparations to reinforce this sector. 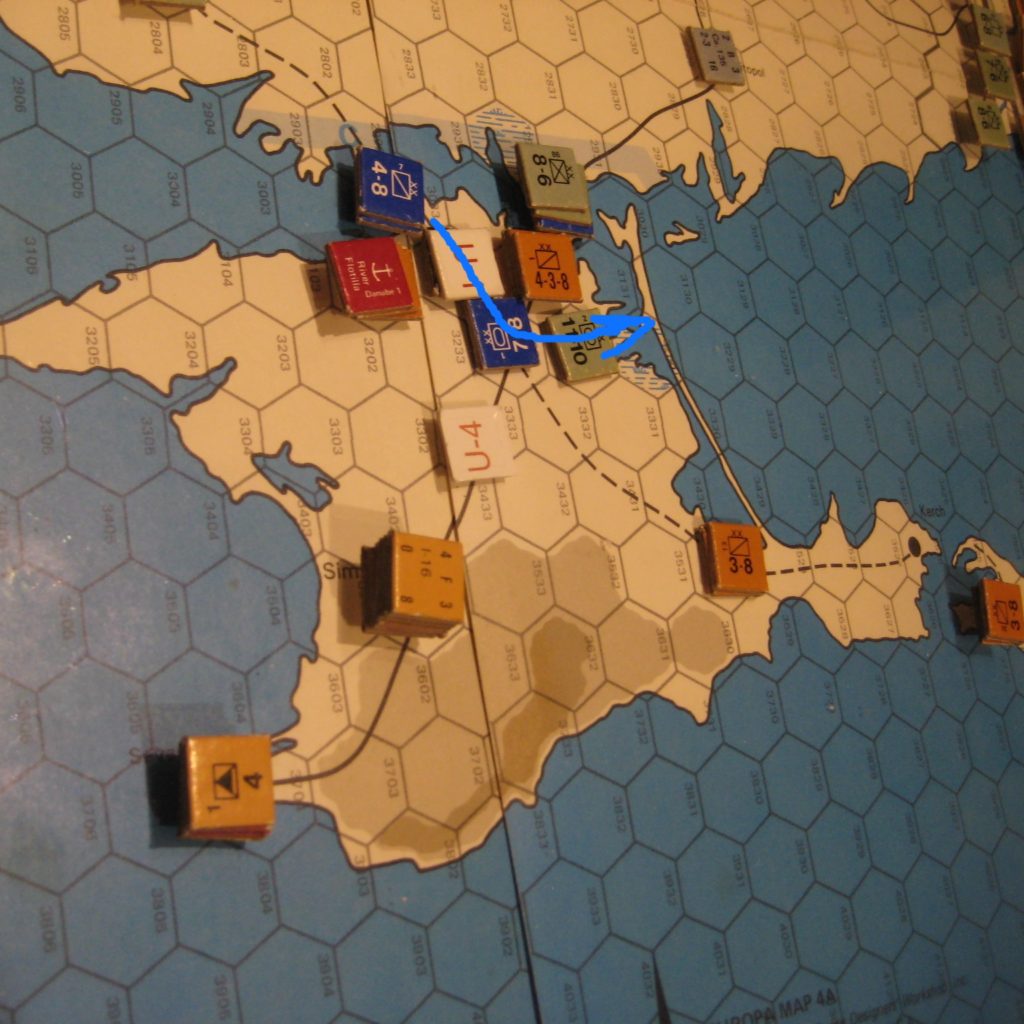