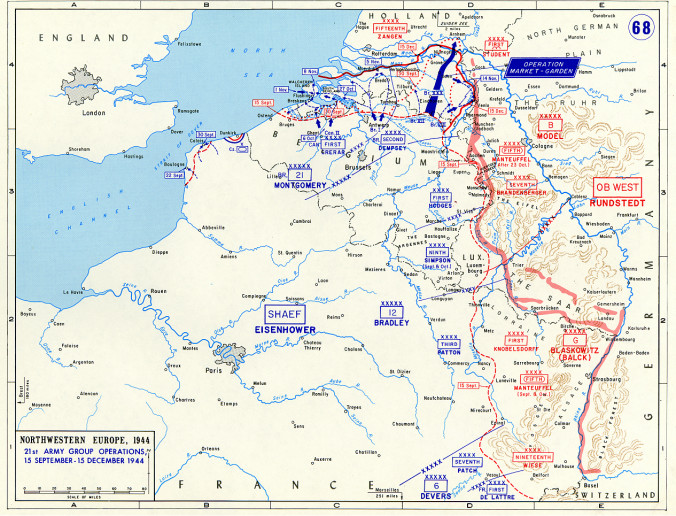 Following the August breakout from Normandy four allied armies rushed across France, and by September, over 200 days ahead of schedule,[40] they had outrun their supply. Though the great port of Antwerp had been captured intact, German 15thArmy controlled the Schelde estuary leading to it and German stay-behind forces still held the important channel ports.  Montgomery, Patton, and other field commanders pushed General Eisenhower to assign them a priority which would allow continuation of an advance in their sector. The margin of supply was so tight that a priority in any one sector would force a halt everywhere else.  The Supreme Commander continued to insist on a broad front, over a narrow thrust strategy.

Eisenhower offered the newly created Allied 1stAirborne Army to both Bradley and Montgomery as a means to speed the faltering advance.  Bradley turned down the proposal, but the newly promoted Field Marshall eagerly embraced the opportunity.[41]  On September 10 Montgomery proposed a bold plan using 1stAllied Airborne Army to get across the Rhine.  The plan so impressed Eisenhower that he insisted it be carried out as soon as possible.  He told Montgomery Ill give you whatever you ask to get you over the Rhine . . . .[42]  By approving the plan Eisenhower necessarily delayed operations to clear the approaches to Antwerp, and opening of that port to Allied supply ships. Should it fail the Allies could expect to encounter continued supply shortages, and a war that dragged through the coming winter.

Several factors combined make Montys plan so appealing.  First, many believed that one more good push would crush the German Army in the west, and end the war in 1944.  Conversely, anything more than a short halt by Eisenhowers armies might allow the Germans to reorganize their defenses.  As it was, supply problems had almost brought the combined allied armies to a halt.[43]  German defenses had begun to stiffen in front of Pattons 3rdArmy, but there was as yet little organized resistance confronting Montgomerys 21stArmy Group.[44]  Secondly, Generals George Marshall, Chief of Staff of the US Army, and Hap Arnold, commander of US Army Air Forces, wanted Eisenhower to employ his airborne forces in a major operation before the war ended.[45]  Those forces, recently organized as 1st Allied Airborne Army, had been created at a high cost, and much was expected of them.  Time was fast running out, and though several major drops had been planned, ground forces reached each of the objectives before the airborne operations could be executed.  Finally, German V-2 rockets started hitting London on September 8 and intelligence believed the launch sites were in western Holland.[46] The V-1 sites had just been overrun, and it was not known how many V-2s might be fired at London over the next few months.

Lieutenant General Lewis Brereton, commander 1stAllied Airborne Army, learned of the proposal on the afternoon of September 10, and immediately put his staff to work on it.[47]  21stArmy Group issued orders to carry out Market-Garden to British 2ndArmy on September 12.  The major limit to Market, the airborne portion, was available air transport.  At hand were 1,250 C-47 Dakotas, 354 bombers converted for transport, and about 2,500 gliders, enough to deliver only two of the planned three divisions in one drop. Supply problems were the cause of concern for the ground plan (Garden). Lieutenant General Miles Dempseys British 2ndArmy would be delayed unless Montgomery received absolute priority of supply.  In response, Eisenhower granted Montgomery the supplies he had long sought.[48]  Allied staffs had only seven days to plan the largest airborne operation ever attempted.  They had lately developed so many plans that one could be produced on such short notice. Operation Comet, scheduled and then cancelled in August, was similar to Market, and much of that work was incorporated.[49]

Market would employ three Allied airborne divisions or about 35,000 soldiers, commanded by Lieutenant General Boy Browning, and his British I Airborne Corps.  Browning, Breretons deputy, had a great deal of experience, and was considered Britains leading authority on airborne operations.  His corps headquarters however, had recently converted from a purely administrative role, and had little chance to work on staff procedures. There were no Dutch or air liaison officers at I Airborne Corps and the signal section had only been created on September 2.[50]

Market would employ three Allied airborne divisions or about 35,000 soldiers, commanded by Lieutenant General Boy Browning, and his British I Airborne Corps.  Browning, Breretons deputy, had a great deal of experience, and was considered Britains leading authority on airborne operations.  His corps headquarters however, had recently converted from a purely administrative role, and had little chance to work on command and control procedures. There were no Dutch or air liaison officers at I Airborne Corps, and the signal section had been created on September 2.[51]

At a September 9 briefing Montgomery told Browning that XXX Corps would link up with 1stAirborne Division at the Arnhem bridge in two days time, however: The (airborne) carpet is very long so it will necessarily be narrow.  The essence of the business is to capture those bridges intact.  And this will mean dropping as many men on to the bridges as possible from the word go.  Downing replied We can hold it for four, but I think we are going a bridge too far.[52]  Meteorologists predicted good weather would begin on the 17th, and that day was named D-Day.[53]  Only the most optimistic assumptions about the weather, German capabilities, and their will to fight made Market-Garden feasible.

Previous Allied airborne drops had occurred at night, but there was no moon during the planned landing period.  Therefore, landings would have to take place in daylight.  Brereton, whose preceding assignment was Commander, US 9thAir Force, had never commanded ground forces.  Fearing aircraft losses of up to 40 percent in a daylight drop, he sided with his air transport commanders on two critical decisions.  Due to the lack of night training, and need for crew rest and maintenance, no more than one lift mission per day would be attempted. This meant that at least three days would be needed to complete delivery of the airborne divisions and 1stPolish Airborne Brigade (attached to 1stAirborne Division).[54]  This presumed three days of good flying weather would coincide with the operation, something experienced aviators could have hoped for, but not planned on.  Additionally, heavy German flak defenses in the Arnhem area so concerned the aviators that Brereton agreed to locate British 1stAirborne Divisions drop zones 6-8 miles from the target. As if to make up for this, the Polish Brigade was to be dropped on the marshy ground one mile south of Arnhem Bridge on D+3.  Somehow a drop zone that was unworkable on day one was then acceptable.[55]

Brigadier General James Gavin and his 82ndAirborne Division were tasked to capture first the Groesbeek heights east of Nijmegen, and then the bridge at Grave and two more at Nijmegen.  This section of carpet was 10 miles long. While the Waal River bridge was a primary objective it was located in the middle of Nijmegen, a city of 90,000.  With the approval of Browning, Gavin assigned it the lowest priority.  82ndAirborne needed artillery, and managed to get transport for some of it, as well as all three parachute regiments.[57]  Browning, accompanied by his chef, wine cellar, and I Corps Headquarters would arrive in the 82ndDivision area by glider.[58]

Major General Roy Urquhart had drawn the perilous northern end of the carpet.  This would be his first chance to command the division in combat, and though he had lengthy combat experience, none of it was with the airborne.  His 1st Airborne Red Devils were assigned to take the Lower Rhine highway bridge at Arnhem, as well as nearby pontoon and rail bridges.  Unlike the two American divisions, his units would land 6-8 miles from their primary target, which itself was located in a dense urban area.  Urquharts inexperience may have led him to accept the landing zones assigned by higher, and supposedly better informed commanders.  He remarked that Many of my own commanders were quite willing to land on the southern side, even though it was marshy.  Indeed they were ready to risk injury by parachuting on the north side – on the town itself.[59] 1stAirborne was afforded the fewest transports, and also had to secure its distant landing zone. 1stParachute Brigade, supported by a motorized recon squadron, was to seizing the bridge at Arnhem. Meanwhile, half of glider borne 1stAirlanding Brigade would secure the drop zones so that supplies and the rest of 1stAirborne could be lifted in the next day. Urquhart did bring half his artillery and anti-tank guns, but only about one third of his division was in the initial lift.  The British Airborne Division was smaller than its American counterpart, with only three brigades, instead of four regiments.  Consequently, Major General Sosabowskis 1stPolish Airborne Brigade was attached, and would be dropped on day three near the southern end of the bridge.[60]

Garden was primarily the responsibility of British XXX Corps, commanded by Lieutenant General Brian Horrocks.  2nd Army would provide supporting attacks with XII Corps on the left and VIII Corps on the right.  Guards Armoured Division, with about 13,000 men and 200 tanks would lead the attack out of a bridgehead on the Meuse-Escaut Canal, just south of the Dutch-Belgian border.[61]  Horrocks corps of approximately 100,000 men and 20,000 vehicles would have to advance 64 miles along a single road, on a front two tanks wide.  Cross-country movement was severely restricted by terrain, much of which was reclaimed bog.  The flat terrain and narrow front would lend strength to any organized defense.  All traffic would be one-way, north.  Horrocks tactical headquarters, 43rdand 50th Infantry Divisions followed Guards Armoured closely, but engineers were further back in the long column.[62]