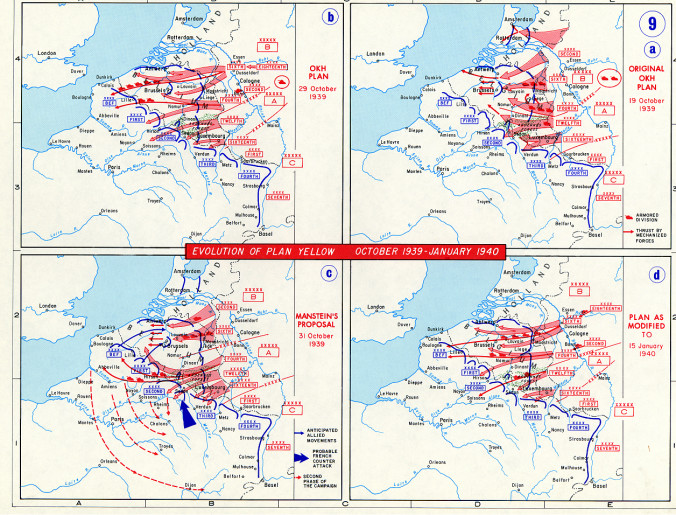 As the summer of 1939 turned to fall, Europe drifted closer to war.  In response to Germanys occupation of Czechoslovakia in March, the Dutch government granted state-of-war powers to General I. H. Reynders, Commander in Chief of the Army and Navy.[1]  On August 23, 1939 Germany and the Soviet Union entered into a non-aggression pact. Belgium began mobilizing on August 26; Poland began calling up her reservists two days after that.[2] The Dutch ordered a full military mobilization on August 29, quickly calling up about 250,000 troops.[3]  General Reynders, unable to agree on basic strategy with the defense minister, resigned in February 1940.[4]

The quick German victory over Poland came as more of a surprise than the actual attack. On October 9, shortly after the last Polish center of resistance surrendered, Hitler issued his first directive for an attack in the west. German armies would attack through Luxembourg, Belgium and Holland at the earliest possible moment.[5]  Good reasons existed for an attack through the Low Countries. First, the Germans feared an allied move into the Low Countries giving the enemy a chance to attack into Germanys vital Ruhr industrial region. On the other hand, German possession of the same area provided a way around the French Maginot line. Finally, Hitler wanted air and naval bases close to England.[6]

Early in the planning stages for his western campaign Hitler directed that airborne forces be used to speed the advance through Belgium and Holland.  The original German plan called for the main thrust (Schwerpunkt) to cross through
southern most Holland near Maastricht and into Belgium south of Liège.  When partial copies of the invasion plan fell into Allied hands the operation was revised, greatly reducing the part played by airborne units.  The fact that the officer who lost the plans was the commander of the parachute school may have contributed to the reduction of the airborne mission. Lieutenant General Kurt Student, chief of airborne forces, immediately began lobbying for a bigger role for his Fallschirmjaeger (paratroopers).  He proposed to use 7thFlieger(Airborne) and 22ndLuftlande(Airlanding) Divisions in Holland.  Proceeding up the chain of command from Army Group B commander through Army Chief of Staff with no luck, he turned to Hans Jeschonnek, Luftwaffe Chief of Staff, who had direct access to Hitler.  Jeschonnek told Student There was considerable argument over your proposal – it was called an act of Columbus – but it is agreed that we should try.[7]  Student was also tasked to take out Fort Eban-Emael in Belgium and secure bridges leading to it. Student is credited with carefully and methodically planning the airborne operations in Holland and Belgium, personally specifying landing zones and objectives down to company
level. [8] He preferred what he called the short method of dropping right on the
objective. Thanks to Students careful planing and extensive rehearsals, most of the operations succeeded, if not always precisely according to plan.

The German Eighteenth Army had the task of conquering Holland, and it was directed to do so quickly with strong support form the Luftwaffein the form of paratroopers and aircraft. General Georg Kuechlers Eighteenth Army included the 9thPanzer Division, one SS motorized division, six infantry divisions and the German Armys only cavalry division, along with corps and army level troops.[10] Although the Dutch had more troops (ten divisions and several independent brigades and regiments), the German force possessed total control of the air, superior firepower and maneuverability, and the initiative. The campaign plan called for the Luftwaffeto drop 4,500 paratroopers and land 12,000 troops in transport planes. This airborne operation was to seize key bridges, and capture the Royal Family, government and Dutch high command at The Hague. Commandos, wearing Dutch uniforms, would capture bridges along the frontier. Strong armored and motorized forces would advance across the frontier, proceed south of the Maas and Waal rivers, and link up with the airborne troops deep in Holland.[11]

The Dutch defense plan was fairly straightforward. Holding the 200-mile long Dutch-German frontier was an impossibility. The Dutch Army would delay along the frontier and again along the Ijssel river in the center. Approximately two thirds of the 250,000 available troops were deployed along the Grebbe and Peel lines.  The Peel Line, situated behind the Peel marshes, was the main line of resistance south of the Waal.  The Grebbe Line (Grebbestelling), placed behind inundated areas and more heavily fortified and carefully planned than the Peel Line, served as the main line in the center. In the north the Dutch planned to hold any attackers at the eastern end of the Great Dike (Afsluitdijk). Behind the Grebbe and Peel Lines lay Fortress Holland, first used by Maurice of Nassau as a center of resistance in the sixteenth century. This last redoubt contained the major population centers of Amsterdam, Utrecht and Rotterdam, along with the capital. Fortress Holland was anchored in the south along the Maas (Meuse) estuary and in the east by extensive flooding and modern fortifications (the East Front or Holland Water Line).[12]

When the Germans invaded Norway in April they used small numbers of paratroopers and landed transports with reinforcements.  The new Dutch CinC, General Henri Winkleman, moved troops to guard airfields and had vehicles parked along straight stretches of road to prevent any attacker from using them to land troops.  In actuality, Dutch intelligence obtained information on both the airdrop, and the armored attack.  Unfortunately, the disbelieving General Reynders locked them in his safe, and failed to brief his replacement, General Winkelman. Major G. J. Sas, the Dutch Military Attaché in Berlin, sent another report outlining the German plan two weeks before the attack, but this information somehow got lost.[13]

The Dutch asked Belgium to support their southern (Peel) defense line, but received no firm answer. Disheartened by the lack of Belgian cooperation, the Dutch pulled most of their southern forces back to the north, behind the Waal river.[14] This increased the distance between the Belgians and Dutch, and unknowingly opened the way to Rotterdam for German mechanized forces.

After the initial invasion scare of November12, intelligence on the ever-changing German invasion dates, and associated postponements, continued to cause tension and occasional alerts. On May 4 the Dutch received information that Germany planned to invade within a few days. This was confirmed the next day, and Major Sas soon reported the invasion date, May 8. Leave was again canceled, and all forces were on full alert. When the attack failed to materialize, the defenders relaxed. They had witnessed the last of twenty-nine postponements. Late on May 9 Major Sas received word that the final German attack orders had gone out that afternoon. He made a last call to The Hague with the message Tomorrow morning at dawn![15]

Before leaving his office on May 9, General Winkelman issued an alarm to Dutch forces along the frontier with Germany, including permission to destroy some bridges along the frontier. Regrettably the CinC left alert levels in other areas up to local commanders. In particular, the Dutch Air Force was not placed on alert, nor was it notified of the first German incursions.

[1]Frederick S. Pearson, The Weak State in International Crises: The Case of The Netherlands in the German Invasion Crises of 1939-40(Washington: University Press of America, 1981), 48.