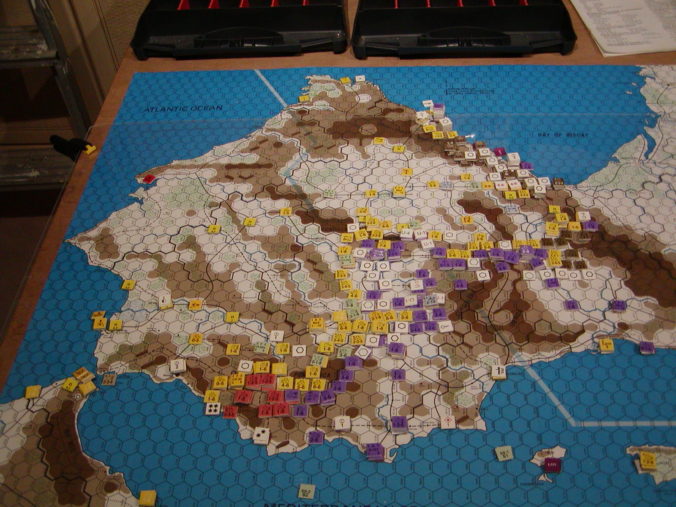 Carlo Benes picked up the pile of files on his desk and rushed down the marble stairs bounding them two at a time. Papers flew out of his arms and fluttered like leaves in autumn down past the ornate balustrade of the stairwell to the terrazzo floor below.  He was briefly re-united with them as he reached the hallway before bursting through the double wooden doors into the central courtyard.  The building surrounding him on three sides was the government offices where he had resided as governor of the West Madrid district for the last 4 years. Without stopping he flung the files onto the raging bonfire in the centre of the courtyard and raced for the archway to the motor pool. As he rounded the corner he saw the last of the cars laden with his comrade clerks and minor functionaries disappear in a cloud of dust down the main street to the East. The bastards!. Four years as comrades together and they could not even wait for him. Such was the terror instilled by the imminent arrival of the Nationalists which rumour placed a few streets away to the West.  He ran in the direction of the disappearing dust cloud, his legs pumping for all he they were worth, his arms extricating them from his uniform as he went for it would not bode well for him to be caught in his governor’s jacket by the rebels.  The shot rang out from somewhere behind him hitting him between the shoulder blades and propelling him forwards. Stumbling downwards into the dirt he knew that at least he would be spared the ignominy of the firing squad.

Note: The Narrative will now continue on a Monthly basis over winter. 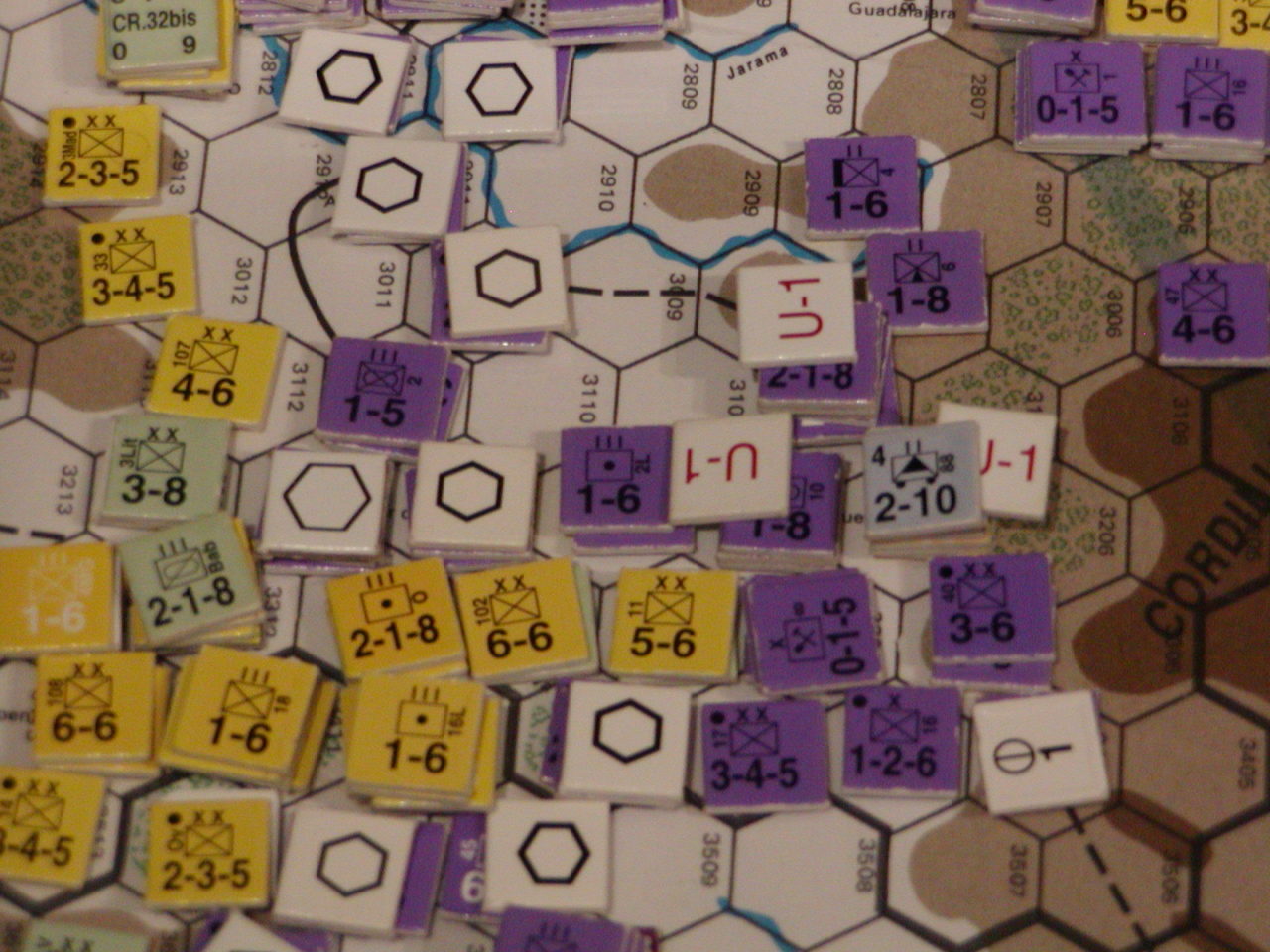 Naval Activity: Following the effective destruction of the Republican air force. All Task forces return to station in the Med to interdict the ports.

Italian Navy called out for on map operations blockading ports. 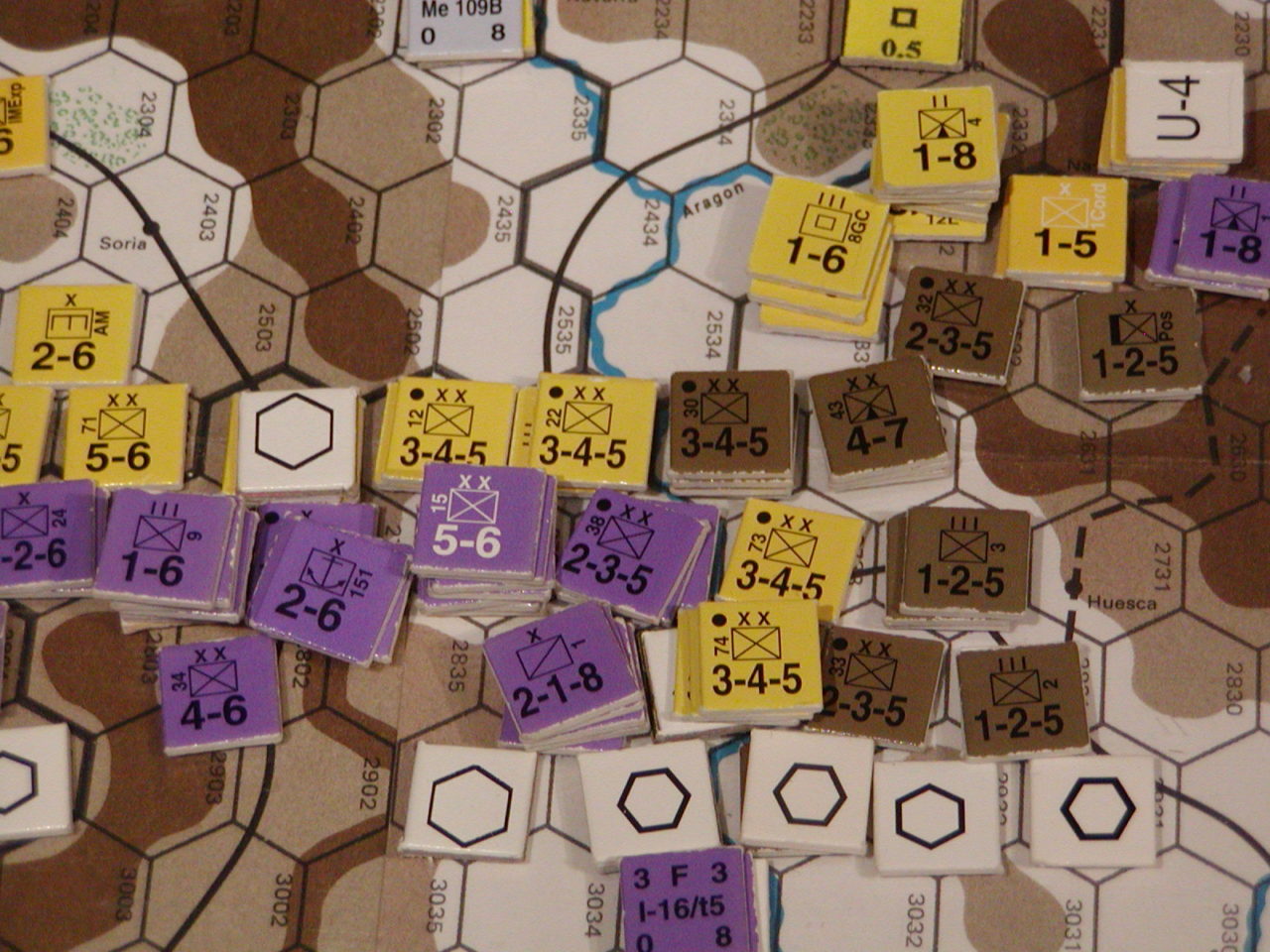 VPs; Rep (+15 VPs) for lack of goberneto collapse
French border: Open
Supply: Nationalist breakthrough at 3207 (Cuenca) is U1
The Republican redoubt in 2412 (mtn pass on the Medina to Campo/Madrid rail line) Rolls for elimination (U4 isolated) final unit 2-6*IV succumbs.
Large section of the Republican line is U1 (3209 around Madrid to 2607)
Left flank of Republican line adjacent Grenada is U3.
Reinforcements: Supplies are routed to France to avoid interdiction.
Replacements; 2 SRPs recovered. R-5 repaired.
Guerrillas: Nationalist uncover guerrilla cell in the Guadjana valley East of Cordoba which is dispersed without causing damage.

Moves: Republicans pull out of the 2 extreme left flank hexes (Motril and adjacent).

The main line contracts and pulls back to Aranjuez and units move to reinforce Madrid.

Elsewhere units pull back to seal the breach and isolate the Nationalist spearhead at Cuenca but are not present in sufficient strength to attack.