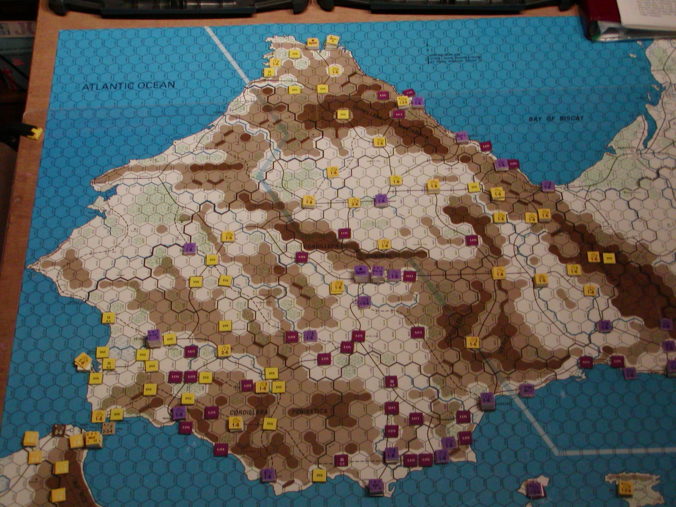 On the morning of the 18th at the barracks of the 2nd Regiment of the Legion Extranjera Miguel Abarca was roused from his sleep around 5 a.m by cries of “Revolution!”. Soon he was lined up on the tarmac at Ceuta airport with his comrades and a rag tag collection of transport planes awaiting the hour flight to Cordoba. Before they had cleared the terminal there the planes were taxying for return to the colony and a further cargo of troops to bolster the revolution.

Alejandro Gonzalez did not like the sea or boats and was glad to climb onto the wharf after his 700 mile voyage from El Ferrol. The previously undisclosed destination was apparent to him as soon as the transport rounded the headland into the river mouth and he saw the long distinctive double tier Muelle del Tinto thrusting into the channel; Huelva. His comrades of the 35rd Regiment were soon formed up on the quayside. Nationalist sympathisers greeted them with news that the Civil Guard had remained loyal to the government and he prepared for a fight. It soon became clear as they marched to the town square however that the mere sight of the 35th was enough to persuade the townsfolk of the rightness of the Nationalist cause and the garrison joined them without a fight.

In Madrid chaos followed premier Caseres Queiroga’s resignation and indecision reigned.  Reports of nearby Toledo supporting the revolution caused orders for the Self Propelled Armoured Cannon regiment to move against the city while elsewhere the army was paralysed by cautious probes away from their barracks in all directions. Reports from Barcelona were even more disturbing with armed mobs scouring the streets for dissenters rather than taking any sort of co-ordinated moves to confront the rebels at Zaragoza.  Furthermore the Basques were arming, no doubt in the hope of creating a separate state in the north.

Intention: To move against Valladolid in force from Salamanca and Burgos. To secure link to Ovideo. To gain as much territory east of Granada. To contain Seville and Cartagenan forces.

Other Colonials move towards ports and airfields.

1-6 inf 33 crosses straits from Cadiz to Jerez.  All available forces converge on Valladolid from Burgos and Salamanca. Other mainland units fan out to secure territory with 1-6 Sec 10GC in Ovido occupying Mieres.

Intention; To hold Seville to delay Nationalist moves north.  Madrid force to capture Toledo in preparation for a move west to cut Nationalist N/S communications and prevent reinforcements from the north moving on Seville.  Ideologically Purify Cartagena and then move to Bilbao via Zaragoza. Northern Gobernetos to await relief from Catalonian force driving north west from the Barcelona area.

Moves: Barcelona, Gerona and Tarragona’s troops begin Purification, others in Catalan take up positions to Purify next turn.

N52 stages to Seville. A101 attempts to bomb transports at Tetuan but fails.