Narrative: The War to Date

Front Line (Loyalist):  Since January the Loyalists mainly with Anarchist units has pushed West into Andalucía and now controls Motril and surrounds Grenada on 4 sides.  The line then follows north and west along the mountain chains to 3712 (30 miles West of Albecete).  The line then turns north through  Alcazar de San Juan which the Loyalists still hold to the Tajea River then straight west to include  the mountain redoubt at 2616.The line then curves back east with the Loyalists occupying the Cordilla Cental.  At around 45 miles short of Catalayud the line south and around a 2 hex intrusion of Nationalists at the head of the Jiloca River turning east to the outskirts of Zaragoza which is now contacted on 3 hexes.  From Zaragoza the line runs east then north hooking over the road to the French town of Pau.

The Asturians control just 2 hexes, Gijon and immediately east.  Santander and Euzkadi are as yet free of Nationalist troops..

Nationalist View of the war since January.  Disappointment at the lack of progress from Jean. The initial attacks went well with some breakthroughs and yet the Loyalists still control the key town of Alcazar de San Juan. Progress has been made North and Toledo captured but without Alcazar any further move will be unsupplied even in summer.  Zaragoza still holds but the Republic is still a real and present danger and their attack towards Cataluyad has twice succeeded in cutting supplies to the Left flank and been beaten back only with the use of precious Attack Supply Points.

The need to contain this has meant that the attack on Euzkadi already far too late had been further delayed and the Loyalists are now amassing VPs for the loss of collapse of all 3 of the gobernetos (This is a result of solitaire play where VPs usually are not at the forefront of thinking. I should have abandoned the attack from Juan when it became tough and used the troops from the Fall of Seville to start attacking the gobernetos)

Plans for the rest of 1937 – Central Front to capture Aranjuez to eliminate Madrid as a source of supply and clear the railroad south to Alcazar de San Juan to maintain supplies to the troops around Toledo ready for winter.

To force the collapse of Euzkadi and Santander.

To use Navy more aggressively to starve Loyalists of supplies.

Loyalist View of the War since January– Very pleased with the stiffening resistance and blunting of the main Nationalist Attack from Jean and of the progress of the attack to Catalayud and on the secondary front at Grenada.  Allowing the loss of Toledo was a mistake but the breakthrough has been contained and force levels are building.  All Gobernetos are at full strength except for the shortage of art points which is preventing the Equipping of Divisions

Plans for the rest of 1937. Defensive posture to be maintained on the Central front with Madrid protected at all costs.   Local counterattacks authorised at full supply to stabilise the front at its current position.  No pasarán!

The capture of Catalayud remains the primary attack focus. Secondary front in Andalucía to continue.  Aim is to encircle Grenada and besiege unless direct assault becomes necessary.

The accrual of Gobernetos VPs is to be continued as long as possible. 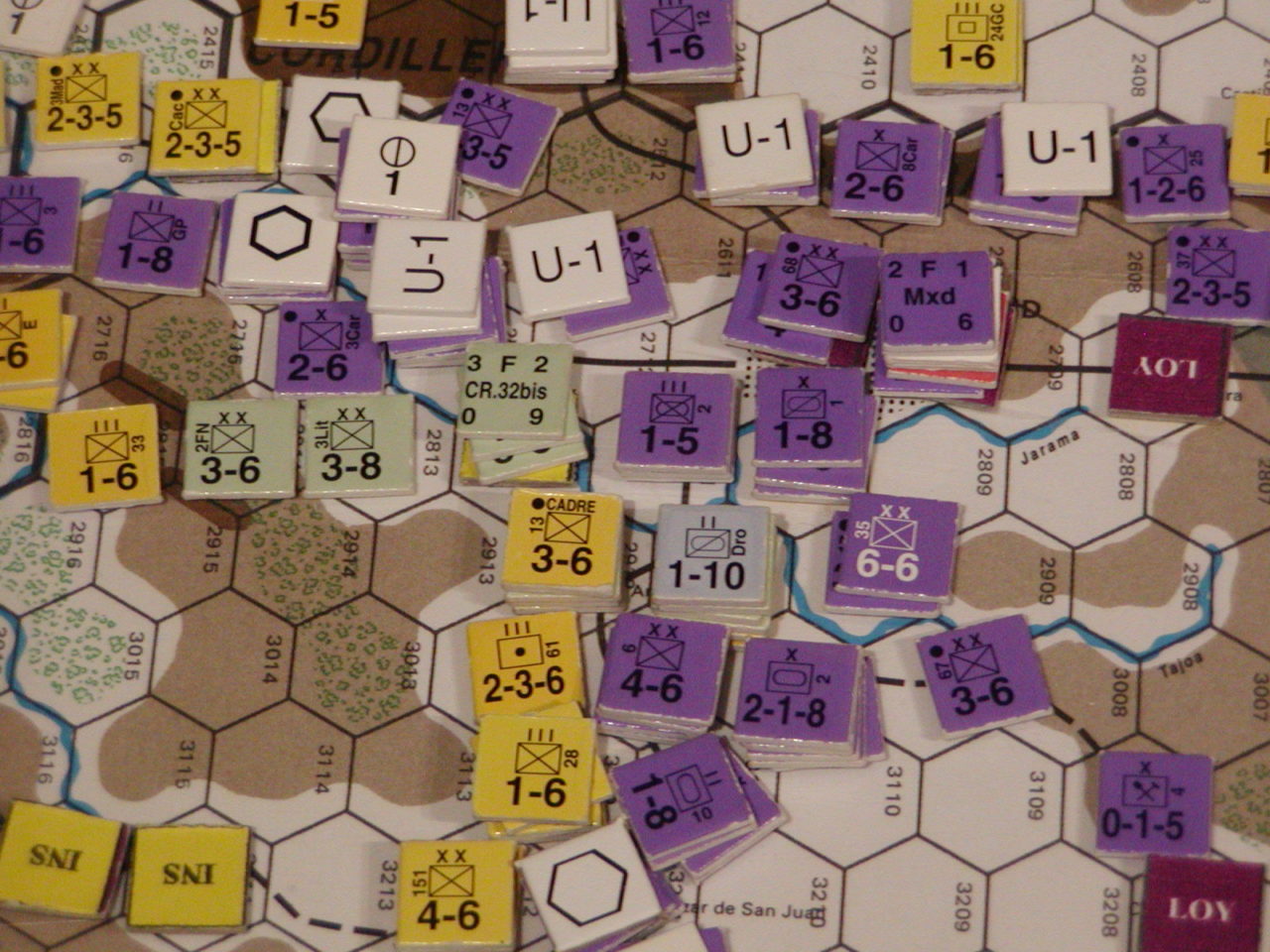 BBTF-1, CATF sail for 1832 (A 101 out of Cartagena fails to Contact) with the intent to prepare for NGS.  Reaction move by BBTF-3, LtTF-1 (Bas) succeeds initiating the first Naval Combat of the war.   Both sides allocate ships to main body.

Both sides elect to disengage. Loyalist TF sails to Bilbao.

Nationalist TF sails to mission hex and prepares for NGS.

Ideological  Purification;  Completed for all point and reference cities in Catalonia