Front Line: The south end of the Nationalist line is anchored on the coast at Motril (4120) and then follows roughly north along the mountain ridge with the Nationalists in control except for the Republican presence on the rail line at 3918. The line then turns East to the end of the mountains at 3714, NE to 3412 then straight NW to circle the Republican mountain redoubt at 2616.The line then then curves East with the Republicans controlling the Cordilla Cental. Up to this point all frontline hexes have units but from here both sides rely on ZOCs to control the front until at the eastern end just 30 miles short of Calatayud where the line solidifies again and turns south to Teruel. The Nationalists control a row of mountains on the western valley sides.  After returning north from Teruel where the Nationalists control one or two hexes of the eastern valley sides it reaches 2836 where the line turns directly east and thence through Zaragoza to the Pyrenees at 2639.

Facing the gobernetos there are 4 self supported divisions plus a few regiments in Asturia and minimal guards elsewhere with a few regiments occupying the southern portion of Ezukadi.

Nationalist view of the progress of the war to date: The Nationalists are pleased with progress to date. They met their initial objectives and are well on the way to fulfilling their longer term goals. The decision to isolate and effectively ignore Seville is not regretted.  At first the loss seemed a disaster but Seville is not actually on the main rail line to the rest of the country and so can be isolated with little effect on communications. Had they decided to deal with this outpost early on it would certainly have weakened them elsewhere and allowed the Republicans to gain a much larger territorial advantage early on and may possibly have allowed the Nationalist to be split in the Caceres/Badajoz area.  The decision is not free of consequences however and the loss of 6 extra attack supplies plus those still bottled up outside the city (early arrivals at Cadiz yomping cross country around the city) has required higher troop concentration to attack unsupplied at places and reduced the total number of attacks.  More damaging perhaps is the loss of the Seville Rail Cap. The Nationalists have had to expend 9ResourcePoints into replacing this (now at 9REs) so have very little spare for fort development. So with the promise from Il Duce of specialist artillery and troops has brought the capture of Seville to the forefront of Nationalist thinking for early 1937.

The Nationalists have managed to check the Republicans at Zaragoza and still retain a tongue of units down the Jiloca valley between Calatayud and Teruel however this is very tenuous (2 hexes wide at the neck) and is in imminent danger of being severed and isolated. They want to try retain this as an “anvil” on which the (slow moving)”hammer” pushing east from Jaen is to strike splitting Madrid from the rest of Republican territory but given the low force levels and tenuous connection to the main front it is looking increasingly unlikely that this area can be held.   The loss of the Jiloca valley will result in the Jaen offensive punching into thin air but yet if Madrid’s rail connections can be severed this in itself will limit the Republican’s ability to reinforce the capital in due course so the push east remains the prime objective for 1937

The one failure for the Nationalists is that they had hoped to compensate for the loss of the Seville factory by an early capture of Gijon but Asturian resistance just seemed to keep ahead of them by a turn or so. Just when the attack troops were sufficiently strong (and naval task forces were on hand and rebuilt at El Ferrol for NGS) pressure from the Republicans moving NE from Catalonia forced the attack to be called off and troops moved south to bolster the Army of Aragon.  So while the Asturian hinterland has been cleared and the ground prepared for a renewed assault in the spring new forces will need to be assembled for this task. Nevertheless this remains a secondary objective for 1937 but may need Santander clearing in preparation for a full scale assault on Gijon. 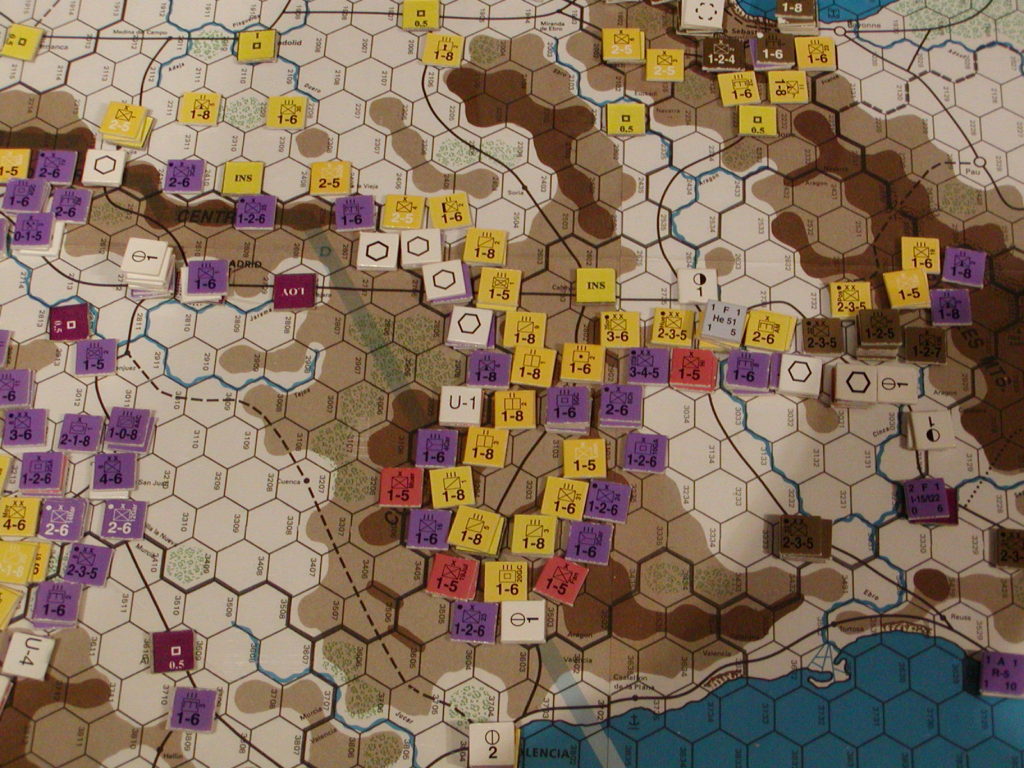 Republican view of the progress of the war to date: The Republican view is one of disappointment and lost opportunity but with some relief in the North. The early hopes of a swift suppression of the revolution by splitting the Nationalist forces and establishing link to Seville proved beyond their capabilities. The thrust west from Madrid was halted and Seville remains a lone isolated outpost.  The plans for an amphibious landing at Huelva required the forcing the blockade of Nationalist subs, capital ships and the CD at Ceuta so at best the plan had a thin chance of success. The early onset of bad weather and the mine hits on BBTF-1 reduced the chance of success to close on zero so the operation was cancelled.

Their main objective of thrusting north from Catalonia via Zaragoza was derailed by the AE on the right flank which occurred due to a combination of a low militia reliability roll and an equally low combat roll resulting in the elimination of most of the Catalonians from the front line. This stopped the offensive cold and the one month respite before replacements were available allowed the Nationalists to reinforce the front.

The only bright spot in this catalogue of doom was the fact that the renewed offensive obliged the Nationalists to call off their attack on Gijon and send troops to hold the line at Zaragoza.

Gijon has now assembled a good defence and has maintained a coastal strip where divisions can be formed and fed back into the city which will make Gijon a tough nut to crack for the Nationalists.

The Republican objectives for 1937 are therefore to continue to thrust northwest from Catalonia, taking Zaragoza and Calatayud thus protecting the eastern approaches to Madrid and at the same time isolating and eliminating the Nationalist at Teruel. However the chance of linking up with the Basques is now considered remote.

The Nationalist thrust east from Jean will be contained with minimal force and the Anarchist thrust towards Grenada will be supported as troops are available although this is seen as a spoiling action to siphon off Nationalists reserves from their own attack further north.

Moves: Nationalist front now becomes continuous around the perimeter with units and ZOCs.

*The Form within garrisons seems to cause some problems such as what happens when some units used to form a division in a garrison are released but others are not.

More significantly the Asturians are allowed to form a number of divisions but then certain “formed” divisions are released some with supported sides.  The OB seems to assume that the artillery units or art RPs generated at Gijon will be applied within the garrisons but I have the art regiments the field and in ZOCs which prevents Forming. Rules state that divisions can be formed at either side and presumably this applies to the garrison divisions but is there any significance to the fact that some are shown supported while most are not? When the units are  Released from the garrison e.g. Oct I  presumably if still in the Form box these are “released” to the General Pool Form box. If the garrison has already been released then normally “available” units are treated as reinforcements but presumably divisions not already formed are treated as “available” forms.  Does anyone have any intel on this? .  There have been some OB corrections to remove certain upgrades which act like forced “Equips” and possibly these “forced” forms should also be removed.

Sortie1: A101 out of Seville and Bre.19 out of Albecete combine to attack Airbase @ Jaen.  CR.32bis intercepts and “Returns” BRe19. Attack aborted.