Decision time for the Republic!  (If you do not want to know why until you have read the turn details skip this section and return afterwards) The Republic now have something of a dilemma. The whole arc of troops north of the breakthrough to Cuenca around Madrid is U2 so half strength and the Nationalist attack thrusting south immediately north of Madrid has found a weak spot where there are insufficient troops at hand to counter the attackers. The dilemma therefore is do the Republicans maintain the front between Aranjuez and  Alcazar de San Juan or pull back tight around the city. Holding the front line will prove difficult but winter is on the way and if muddy conditions return in the South this will compensate for the U2 status halving the defence thus  it may be possible to hold the line and throw any reserves and new recruits to the Defence of the capital. This is attractive because the Nationalists can mass a higher density for offensive moves and a weak front will collapse more quickly.

The counter argument is that maintaining a strong line sucks more troops North to Madrid and eventually these will be cut off. Pulling back allows the Republicans to amass sufficient troops such that even unsupplied they will have sufficient strength to counter attack and breakout south and this allows more troops to escape thus preserving precious manpower for the summer of 1938.  The overriding backdrop to the dilemma is the superior manpower pool of the Nationalist forces will allow them to sustain losses while the Republic is seeing their Replacement Pool grow monthly..

The disadvantage of pulling back is that Madrid will probably fall a bit quicker. However the Nationalists have a higher troop density and can pierce the lie at multiple points so a reduced front at a higher density is preferable.

Thus the desition is made to pull back the line in a phased withdrawal into an “Egg” defence around Madrid taking advantage of the rivers to the south. The bulk of the troops will attempt to break the Nationalists deep but narrow penetration East towards Cuenca and to move South with as many troops as possible. To minimise Nationalist gains in dry weather this withdrawal will be phased leaving a nominal defence line gradually falling back East. However the northern wing will be allowed to loose contack with the Madrid defenders until it halts along the foothills of the Cordillera  Iberica.  The move will not be entirely passive and a counter attack force will be retained aroud Cuenca to try and reduce “The pocket”.

Looking at the bigger picture the Anarchist move to Grenada (frustratingly never getting the resources needed to capture the city) will be abandoned and eastern Andalucía abandoned.

On the Right wing offensive efforts to eliminate Zaragoza will be supplied but other than that the intension is to conserve SPs in winter except where local counter attacks are needed to seal any significant Nationalist breakthroughs. There will not be an attempt to hold in situ if falling back allows higher troop concentrations. In other words the Republic are resigned to the fact that they will not be able to hold the front static in in its present extent 1938 as they had successfully done throughout the summer of 37.  If however  they shorten the line and increase the average stack value from around 4/6 defence factors to 6/8 they hope that will stabilise the line for the 1938 Nationalist summer offensive. 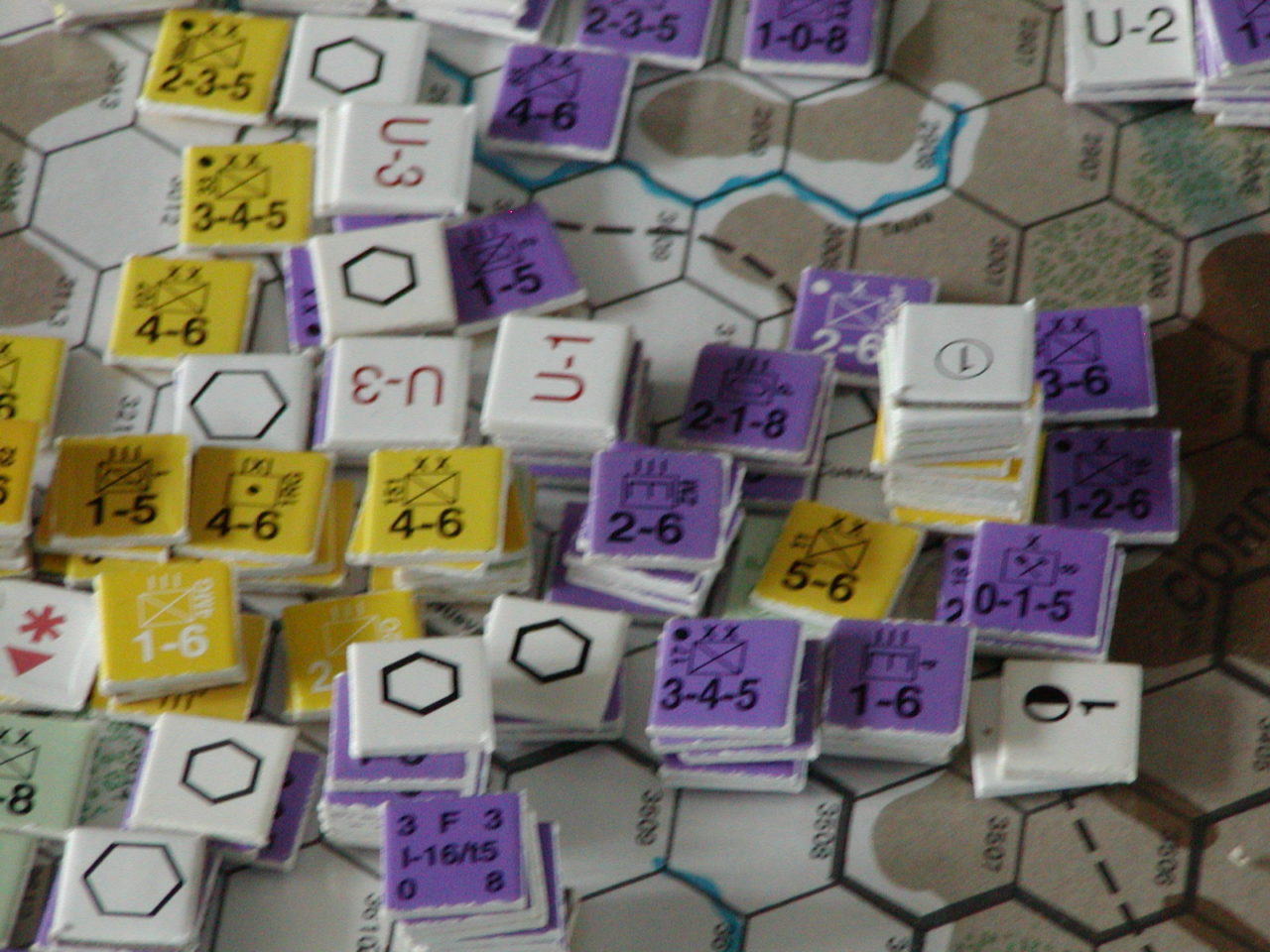 Exploitation: Bab, B to Cuenca

Guerrillas;  (Initially. Hit Airbase at Cacares aborting the  SM.79- stationed there. However after rules check and thought , I have “ruled” that an intrinsic garrison prevents a guerrilla attack because it represents a  military presence in the hex. RAW in 39.D defines a garrison as “treated as a Static (Unit Type) “ so there is some ambiguity there . What do others think? Changed to rail hit at 3221

Moves: With no prospect of an early capture of Cuenca or the Madrid/Catalayud rail line the Republic decides after much debate to withdraw into Madrid and pull back behind the river abandoning a number of fortified positions to increase average defence strength.