The Winter Offensive intensifies with 6 attacks on the main front and now that the vast majority of German panzers are engaged here and in the Moscow assaults a second front is opened south of Leningrad.

On the main front west of Voronezh a Guards Cavalry unit penetrates the German line and the subsequent unmodified 3:1 attack (against Das Reich, an infantry XX and supports so ½ winterised) results in a EX eliminating the stack completely due to the Guards penetration.

Elsewhere two 1.5:1 +2 attacks are stalled by NEs and the other three attacks result in two retreats by the Axis and an HX cadering another three infantry divisions.

South of Leningrad the Soviets take advantage of the weak German line in this hitherto quiet sector and putting all 10 Special Replacements into the city and releasing the reserves already in place strike south and cadre two infantry divisions.

This much smaller right hook is in fact far more dangerous given the lack of German forces in the area and the potential for a swift advance south.

Leningrad Front; Forces drawn from replacements, the Leningrad Defence Force and railed from the Valdai reach the front and the Soviets judge it time to attack before the Germans detect the build-up and send reinforcements to this quiet sector of single defending divisions on alternate hexes. The attack is launched on a much smaller frontage than at Voronezh and the attackers are regular un-winterised troops but both attacks result in the cadreing of the German infantry defenders. 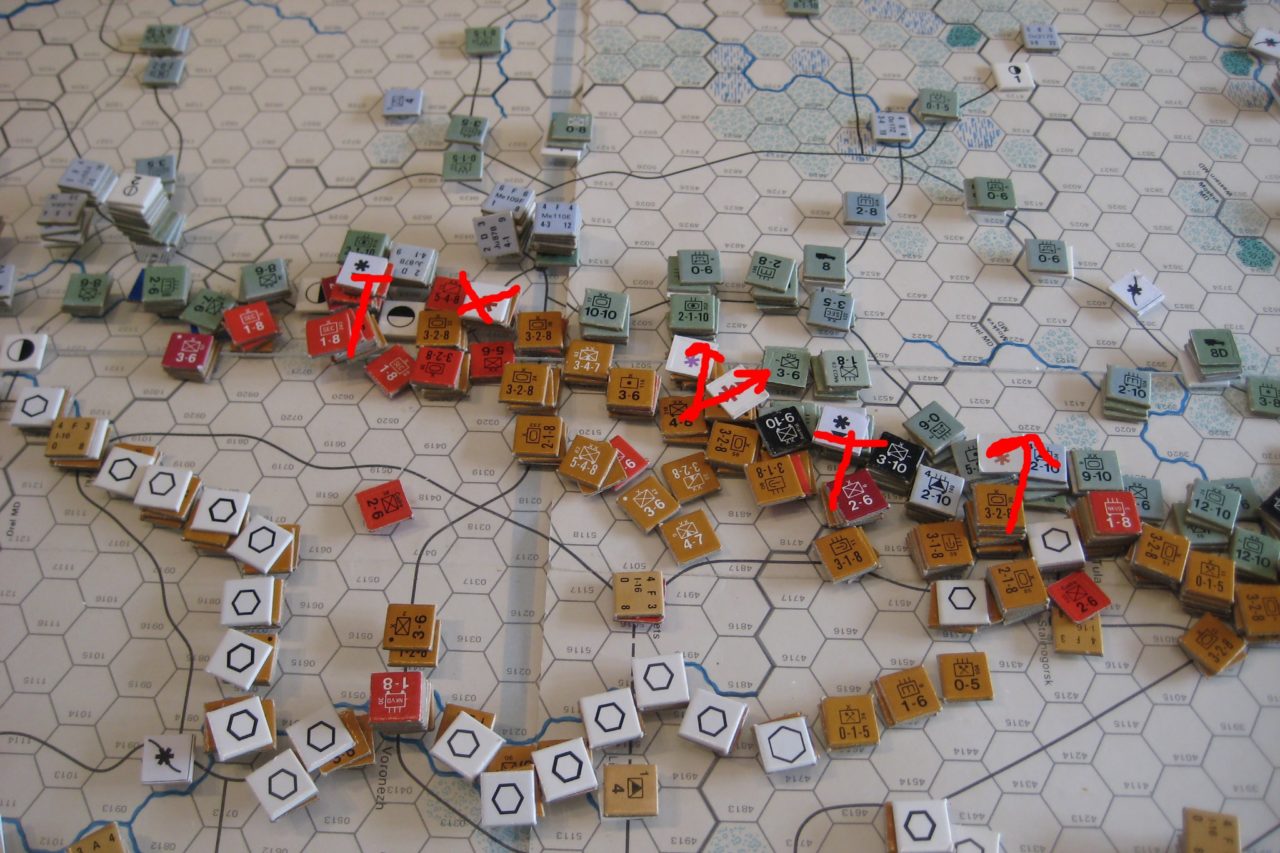 Moscow Front: The exposed NW city hex is reinforced and the shattered defending Guard unit is pulled out of the line to rebuild. Along the line south to Tula fresh troops continue to pad out the defenders as a Tank and Mech Corps move south and attack the German line.

Voronezh Front: The main attack intensifies (as detailed in the introduction.) Meanwhile a night transfer of Transport aircraft lands into Voronezh while airborne troops are railed in under cover of darkness to conceal their presence from the Axis. Plans are drawn up for an airborne assault on Bryansk and the adjacent clear hex with a follow up transfer of para infantry into the airfield. This is scheduled for the Feb II turn dependent upon the pace of the advance and partisan reports of a continued absence of Axis units in the area. 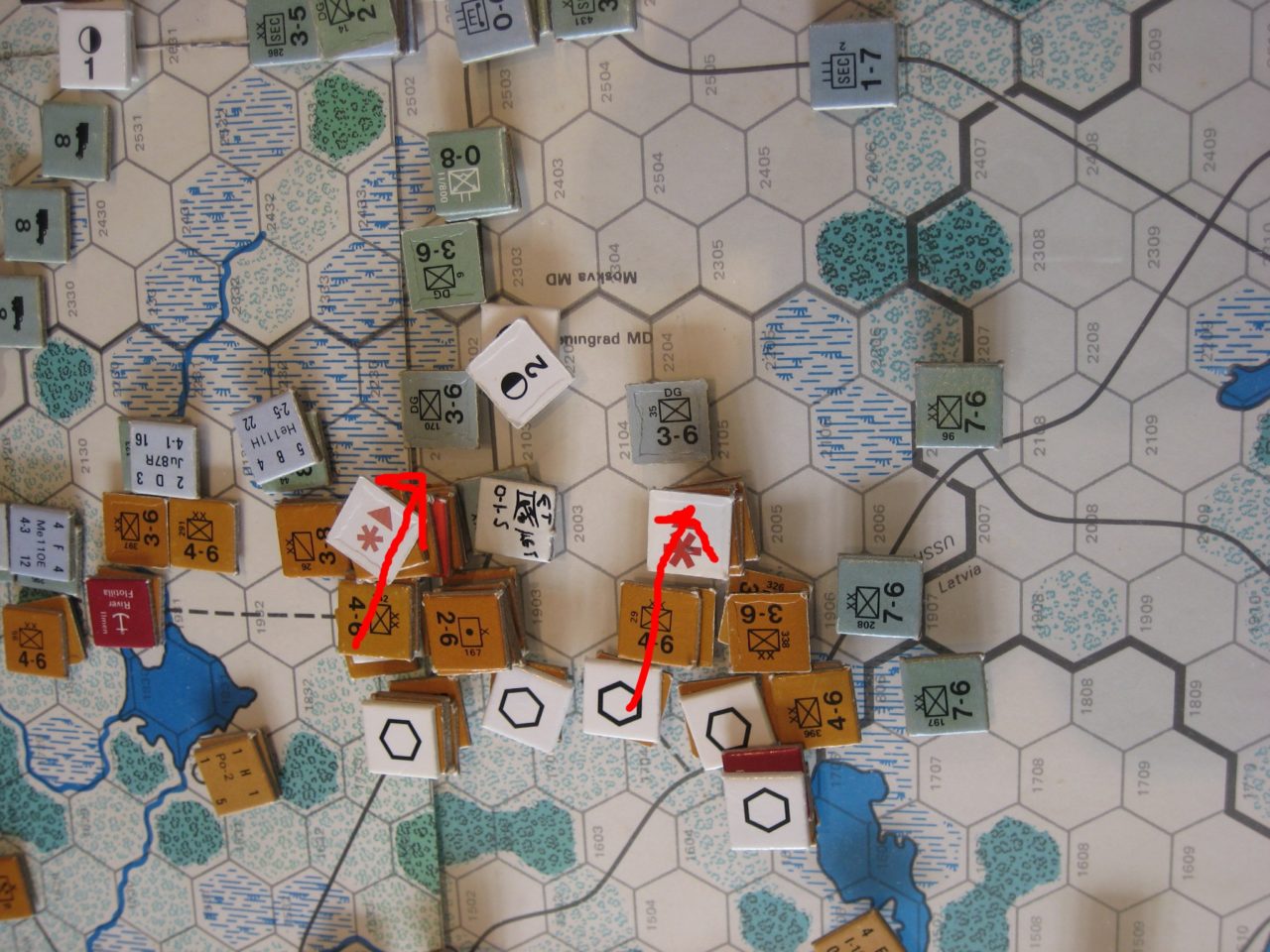 Rostov Front; All is quiet although a few winterised regiments are released and moved north.

Crimea/Odessa: Defenders begin to fortify the line but the loss of the Komintern requires the transfer of a vessel to Odessa to maintain supply to the City.

An RP is landed at Sevastopol for fortification use and the River Flotilla/capital ships bring in supplies to the outer ring.

Air War: Expecting another assault on the NW hex of Moscow the Soviets task all medium range assault bombers to provide DAS over the hex. Another whirling battle occurs over the city as the Germans patrol and intercept the bombing stream despite the numerical superiority the soviets enjoy in fighters.  In the resulting melee 8 German fighters mostly BF 109G patrol attack 2 of the assault bombers then intercept over the target hex. They by-pass the 11 Soviet Migs, LaaGs and Yaks who only manage to Eliminate 2 fighters and Abort a third. The 8 surviving German aircraft attack the 8 strong bombing stream with devastating effectiveness; Eliminating 3 of the eight, Aborting another 3 and returning the seventh. A lone SB-2 1 factor bomber makes it over the target zone. – will it survive the flack?

One of the Soviet Voronezh Front attacks requires long range bomber support which fly un-escorted to provide AS. 5 German fighters completely fail to engage the bombers despite regular patrols on the area but do intercept over the target hex only managing to Return 2 of the enemy. The squadron commander is “re-assigned” to a Penal Battalion.