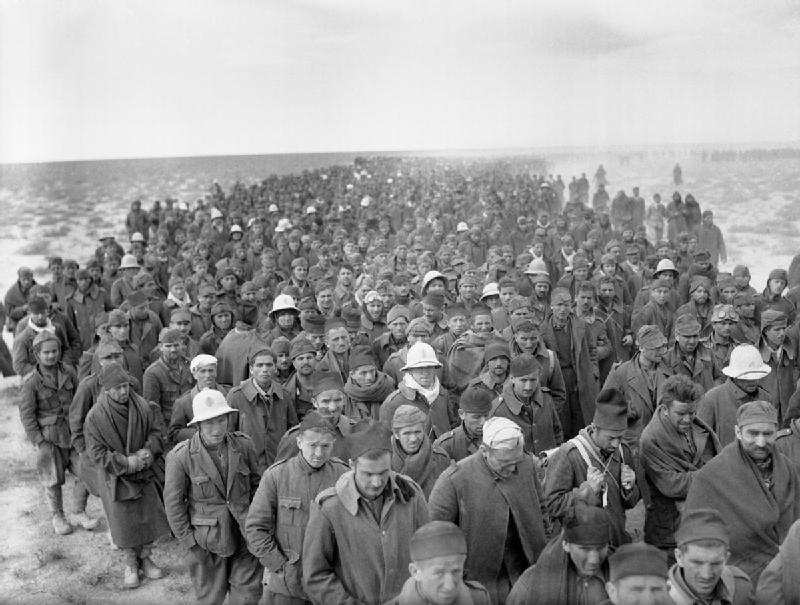 A column of Italian prisoners captured during the assault on Bardia, Libya

The service history of the 64th Catanzaro Division was ill-starred throughout its brief existence. The 64th Catanzaro Division was formed in late May/early June 1940 in Cyrenaica. To form this new division, the 203rd Artillery Regiment and certain other the support and service troops of the disbanded 3rd CC.NN. Division “21 Aprile” were utilized. The majority of the troops however were newly raised and the division’s two infantry regiments (141st, 142nd) were completely green. It should have taken six months to work this division up to level acceptable for a combat formation, but it was not to get it.

On formation, the division was composed of the following elements:

After the destruction of the Italian forces in the military camps in and around Sidi al-Barrani, the remaining Italian forces in Egypt were ordered to withdraw back into Libya. While the Cirene Division (deployed to the south of the Catanzaro Division in the Sofafi area) was able to side slip the advancing Commonwealth forces using its greater mobility, the slow moving 64th Catanzaro Division was confronted by the 7th Armoured Brigade (plus some troops from the support group) as it began its retreat. The British 7th Armoured Brigade caught the Catanzaro a few miles west of Buq Buq. The divisional artillery engaged the tanks, either in a desultory manner or to some effect depending upon the sources you read. When the tanks closed, the mass of the division quickly surrendered showing its ill trained men (and bad officers) had no desire to fight. The lead elements of the retreating columns of the division managed to escape the collapse, and passed into the fortress of Bardia. These remnants showed they were of like mind of their former comrades, and played no role, that I know of, during the battle for Bardia. When the last troops in the fortress surrendered on January 6th 1941, the sorry history of the 64th Catanzaro Truckborne Infantry Division finally ended. There were no plans ever conceived to reform this miserable division.

As you can see below, I accept the current rating of the 64th Division in WitD. However, the rating given for the other 60 series division is not, I think, as accurate as it could be. The 60th to 63rd Divisions had been existence for some time, and were the best equipped of any of the Italian divisions at least in terms of transport. They had an Achilles heel, which was the fact they were still organized under the 1938 organizational scheme, and thus were woefully short of close support weapons even as compared to a standard Italian infantry division of 1940. Thus I give this class of divisions a 3-8 rating. The Catanzaro Division lacking training, transport, and anything resembling leadership amongst its officers is doing well to receive a 2-6 rating. The higher rating of the 60 series divisions is available to the Catanzaro on the assumption that further training would have allowed the Italian command to remove from the division of its cadre of misfits and incompetents and set up a proper training programme for the division