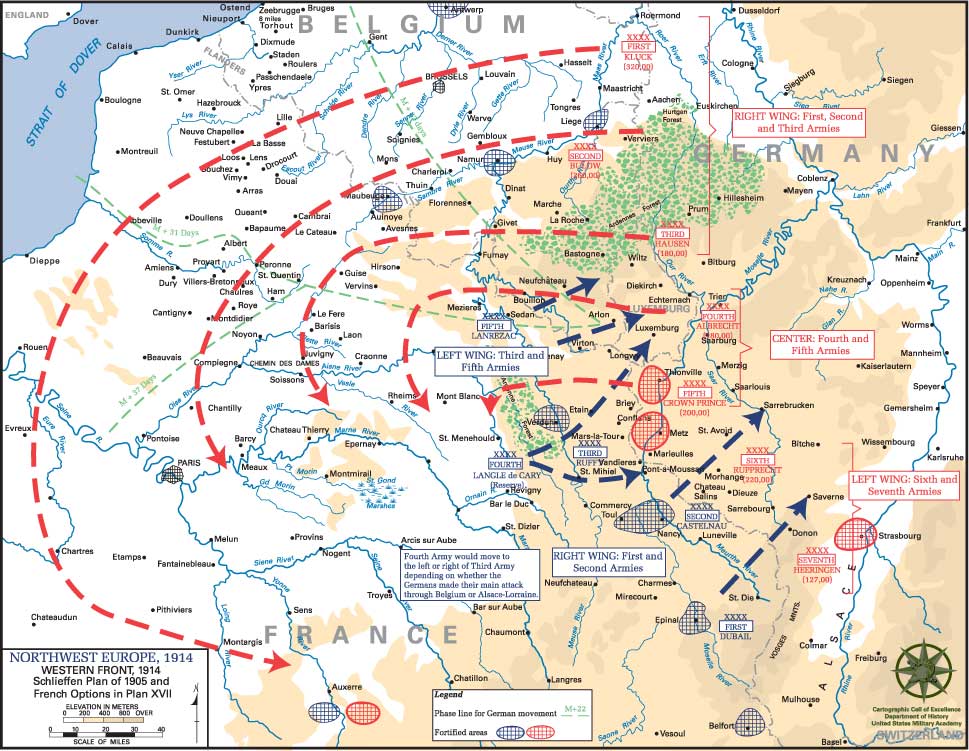 Illustration of the Schlieffen Plan with its wide swing through Belgium and Northern France.

Germany’s position in the centre of Europe in connection with long borders which were not protected by natural barriers made its defence more difficult than those of its neighbours.

Therefor any commander considering a war against one of Germanys neighbours had to be aware of the danger of either getting drawn into a war of attrition or a two-front-war, both cases being very unfavourable for the Germans, whose geostrategical weakness would usually allow its enemies to cut of the flow of resources from overseas. Thus any plan for a campaign had to seek for a decision within some months, otherwise Germany would face the danger of a long war of attrition that it was likely to loose.

After the German Unification the most likely enemies were France and Russia. To escape the disaster of a two-front war the Prussian General Staff decided to attack France with all troops available, leaving only a few divisions guarding the East against a Russian advance. As the French border with Germany was only 200 miles long and had been heavily fortified by the French, and as the French armies grew stronger, both factors ruled out a frontal assault as in 1870.

Thus the chief of the General Staff, Count Alfred von Schlieffen, developed the plan to use only a part of the German army to guard the French border and to deliver the main thrust through Belgium. The German troops were to wheel around Verdun and, after encircling Paris and partly bypassing it in the West, to press the French armies against the German border from behind. This manoeuvre would create a sort of “Super-Cannae” and enable the Germans to achieve a quick total victory, which would free troops for the eastern theatre. To fulfil this task detailed plans were created when and at which day of mobilisation what corps had to take which city, and a gigantic plan of railroad transports to secure the accurate development was pinned down. The Schlieffen Plan has much been criticised for its detailed orders, which preplanned the moves of virtually all corps right to the decision of the battle, thus leaving virtually no time for Clausewitz “friction” or even contrary orders by the CiC. Every departing from the original development bare within it the danger of failure.

This plan was finished in 1905 and only slightly modified by Schlieffens successor Moltke the Younger, the nephew of the older Moltke who defeated Austria and France. But these modifications proved to be crucial. Schlieffen had stripped the left wing, who was to engage and pin down the mass of the French army, down to 7 Divisions, whereas the right wing was to consist out of 54 Divisions. Moltke used the additional Divisions he gained in the period from 1905-14 to strengthen the left wing and to assemble a reserve of six new Divisions. This alone did not much to hamper with Schlieffen’s plan, but the addition of failures in leadership in the early stages of the war led to a disaster.