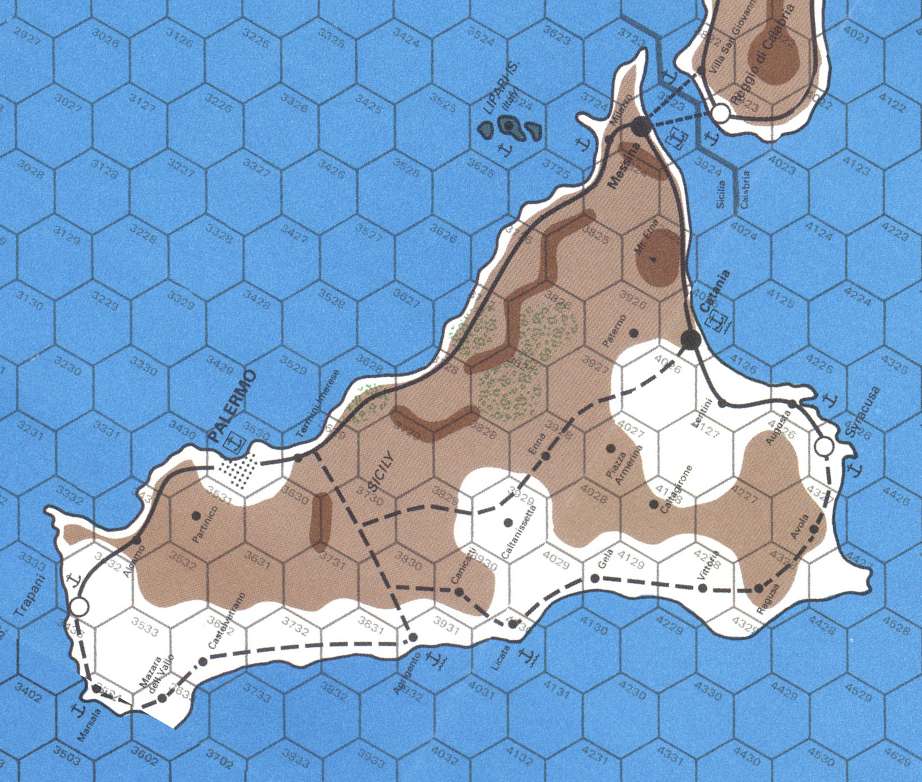 An Europa-map of the island of Sicily, assembled from maps 26 and 27 from Second Front.

The first question I’d like to address is “What is Sicily worth?”

Sicily is an unsinkable aircraft carrier for whomever owns it. This is a big issue for both the Axis and Allies, in terms of having this for themselves AND denying it to their opponent. Certainly the Allies are VERY interested in extending the reach of their air-power to Mainland Italy, while the Axis want to limit the range of Allied air-power as much as possible. Count out Spitfire or P-40 range from Messina as compared to Malta to see just how important Sicily is to the Allies. Count out Strat Wing range from 26:4026 [west of Catania] as compared to from North Africa, again quite significant.

While there is much less value for the Axis in having these air bases, there is great value in their denying them to the Allies. Sicily is by far the best place from which to launch an Allied invasion of southern Italy. We touched on the air-power considerations above, which are critical, but naval considerations are very important as well. Note that from the N.E. Sicilian ports the Allies can reach as far north as Salerno while moving at night [i.e. they won’t be moving in daylight until they enter the Salerno hex]. From Catania they can get adjacent to Crotone, again under the cover of night movement. This means that a large area of southern Italy is opened up to invasion where the Allies can approach the landing sites using ONLY night movement, denying the Axis the use of their air forces to bomb the Allied fleets while in transit. It also means that the Allies can fly their CAP to protect the fleet in just the invasion hex itself. This is a big bonus, since it means the Allies don’t have to hold back fighters to intercept Axis anti-shipping missions en route, they simply have to protect them once they reach the beaches themselves.

Of course Sicily is also a great place from which to get across the straits – a one hex passage to the mainland, again at night. And as soon as you are ashore here, the straits provide a ready-made supply and reinforcement route, freeing up the LCs immediately to threaten landings elsewhere.

Sicily is a surrender condition, which makes it VERY important to both the Axis and Allies. For the first surrender attempt, you need two conditions, so Sicily alone is worth 50% of what you need as the Allies. In effect, taking Sicily will put you half way to having Italy surrender. And it is a big deal – both for the Allies achieving it, and the Axis preventing it. Defending Italy without the Italians is a much, much more difficult proposition for the Axis than defending it WITH the Italians. Certainly, the Allies desire the surrender of Italy as quickly as possible.

Sicily is worth 6 VPs per quarter – either in terms of the Allies gaining these VPs, or the Axis denying them to the Allies. In a game lasting until May I ’45, this represents 48 VPs total – 6 VPs per each of 8 VP checks. While not a game breaking amount by any means, every VP the Allies gain IS important, if only to offset VP losses. And 48 VPs is not an insignificant number; it’s enough [or nearly enough] to shift the level of victory by one entire level in a campaign game.

So there are a number of considerations which make Sicily very important to both sides. I think we can agree on that – the question then is “What are you willing to pay to get these benefits of holding Sicily?”. Every decision in Second Front is, in the end, a cost-benefit analysis – “What am I risking to get this, and is the reward of having this worth the risk?”

A visit to CARL

Getting there and getting away 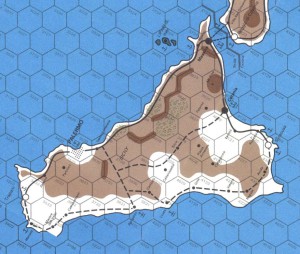 An Europa-map of the island of Sicily, assembled from maps 26 and 27 from Second Front.