Mostly minor revisions not readily visible: I consolidatet some of the PHP code into less files and extended the CSS: We have now nixe boxes around larger images, and Icons denoting the type of link, wether external, internal, mail or footnote. Even less visible initially: I’ve started filling up the Arsenal, starting with the entry for “Total War” and its predecessors.

Just a short note that a new link entry has been posted with information about the Red Army during World War II, and a link to pretty exiting source files, if you are into esoteric stuff. 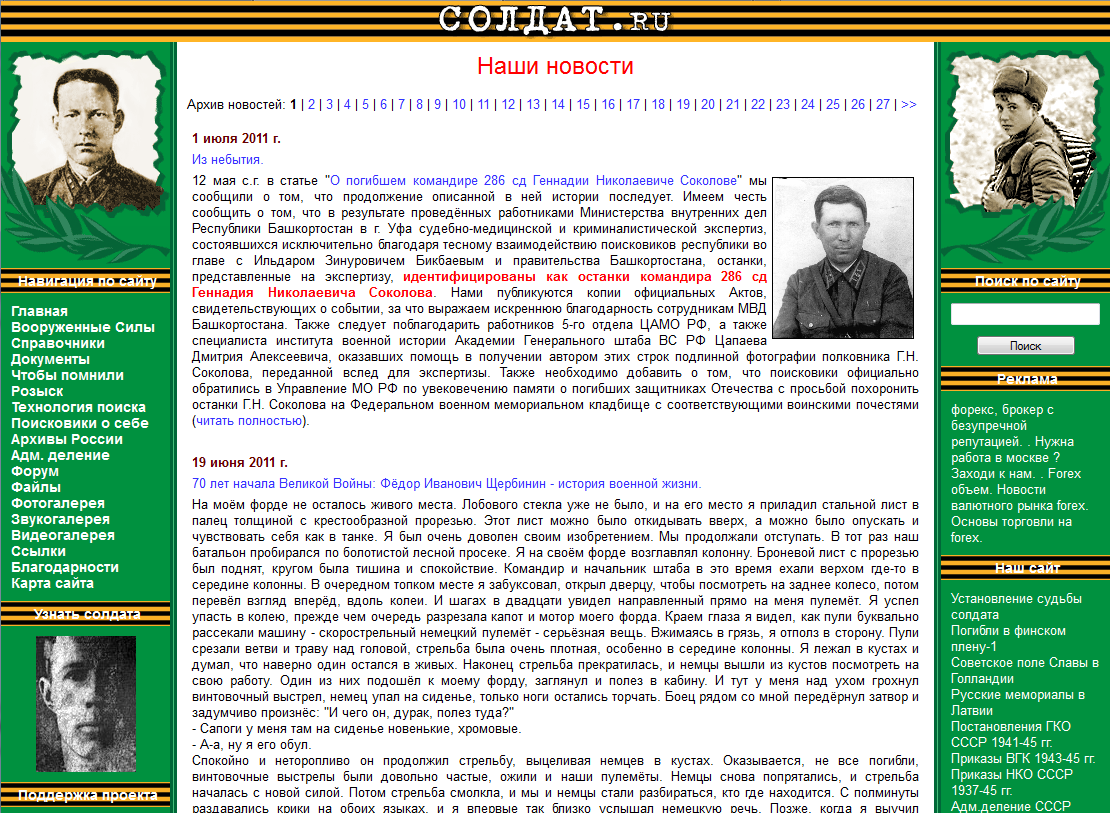 Screenshot of the defunct website sodat.ru, taken on 2013-05-15 from archive.org

In order to explain why I am linking with google translate to an Entry on archive.org, a little explanation is probably warranted. For a long time our knowledge about the organisation of the Red Army and its structure during World War II was fragmental at best. While the western Allies published extensive official histories, and the defeated countries of the Axis saw whole archives transferred to Washington and dissected there, the Soviet Union shrouded everything military in a veil of secrecy. Until the late Eighties, the best and most reliable information on the history of the Red Army came from captured german intelligence records.

The Collapse of the Eastern Block changed all this. For a brief period in the Nineties, archives and libraries opened their doors, and a wealth of information was suddenly available for researchers and historians. In 1995 Charles S. Sharp started publishing a series of orders of battle of the Red Army detailing the unit histories of the ground formations of the Soviet Army and NKVD. Sharp partly leaned on the research by Poirer and Conner and used some on the original German records, but the most important new source was the official order of battle of the Soviet Army as published by the Soviet Ministry of Defense from 1956 to 1990. It was relatively unknown until the early 1990s because the Ministry of Defense had classified all of them as secret. The problem with these OOBs is they only detail the combat forces and not the support forces.

A couple of years ago then information seeped out of the former USSR about a much larger series of books detailing not only the combat units, but also the combat support and combat service support units of the Army, Navy, Air Force and PVO forces. Finally, on 24th August of 2007, through his source, Igor Ivlev posted on his soldat.ru website scans of most (one is missing) of these books. It seems that they are appendices to General Staff Directives (which still remain restricted) showing every formation, unit, sub-unit, establishments and institutions in the Soviet Armed Forces and NKVD in the Operational Army during the war. The first one was published in 1956 and the last in 1973. Intermittent updates followed until 1998.

This was and is the most complete and authoritative source about the Red Armys Order of battle in Word War II.

Sometime in 2011 soldat.ru went offline, whether do to personal reasons or because the copyright paranoia has by now successfully replaced the cold war paranoia we don’t know. However, archive org thankfully saved a set of the files, so the originals are available. Additionally, the team from RKKA started the herculean task of translating this monumental work into English, and should you not be proficient in Russian, you can always start reading there. However, since the appendices are not available in any library or any other source, I thought that information to be more important at the current moment.

The last two weeks went by with transferring the games entries from the german glossary to the armory, a process that is by no means finished. The glossaries both look okay now, except the image placements and some lacking entries, but a lot of the 80 new pages in the arsenal still lack content or corrections. Unfortunately, rectifying that is only one entry on a rather long todo-list regarding the general staff archives, so it might be a while. On the bright side, I plan to add another link entry next week.