General Jose Fernandez de Villa-Abrille looked out over the parade ground where the 6th Regiment was assembled. As he watched a dark sedan slew to a halt in a cloud of early morning dust. Five men stepped out. Jose recognised the central figure as General Queipo De llano an irreverent and cynical man with known fascist leanings.  After a heated discussion with the drill sergeant they made their way to Jose’s office.

As the door swung open a single shot rang out. Queipo died with an expression of surprise and disappointment on his face, Surprise that the dithering dolt De Villa-Abrille would dare take such decisive action and disappointment that his dream of creating a Nationalist State centred upon the Andalucían capital city of Seville was stalled from the outset.

Jose, not normally a man of decisive action, had been warned by a frantic call late last night from his friend and occasional bridge partner now on protection duty at the High Commissioners office in the Spanish Moroccan city of Tauten. Threatened with artillery they had surrendered and most including the Commissioner had been executed. All of the colony was aflame with Nationalist fervour. Troops had been mobilised that morning and preparations were already underway for a surprise move to the mainland.

Devoid now of any major cities the Nationalists chose the ancient fortifications of Cadiz as their capital. Occupying the tip of a long peninsular the walled town protected from direct assault by the Nationalist garrison at Jerez-la-Frontera and was close to reinforcements arriving daily by sea and air from Morocco. It was a perfect bastion.

But the rebellion was primarily one of the peasant class, large swaths of the countryside and many small towns had declared for the cause but not one major city and only a few of the regional centres were flying the Nationalist flag this morning. 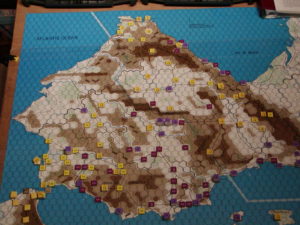 The next few weeks would be decisive………….

(Note: Some phrases (in quote marks) have been lifted from Anthony Beevor’s book “The Battle For Spain” and adaped to fit the Narrative)

Nationalists declare Cadiz as their seat of government.

Land and sea have clear weather..